@Eric_Inovelli Not to hi-jack your thread, but following the directions in the instructions provided in box of the LZW30-SN switches do not work in my house for 3-way. I cannot toggle from the dumb switch on if the Inovelli Smart Switch is off. However, if the Inovelli Switch is On, and I walk over to the dumb switch, it will power off, but the Inovelli Blue LED remains lit. Also, I’ve just installed another 3-way switch following the guide and now the under cabinet lighting is…well somewhat working. I have the same issue as above (can’t toggle on/off if I-Switch is off), but also the under cabinet lighting remains on (dim) even if both switches are toggled off. Please see the wiring in the pictures. The Smart Switch is the Line side, the dummy switch is the load side (2 different boxes obv). I followed Page 6 3-way installation (two switches control the light). Please let me know if something is wired wrong. It definitely does not work in a true 3-way solution. 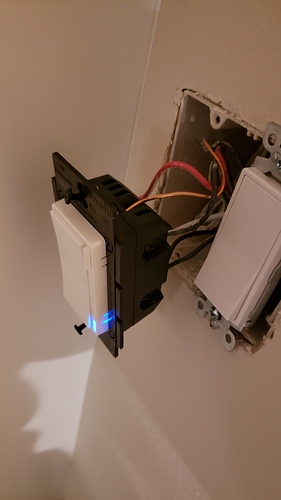 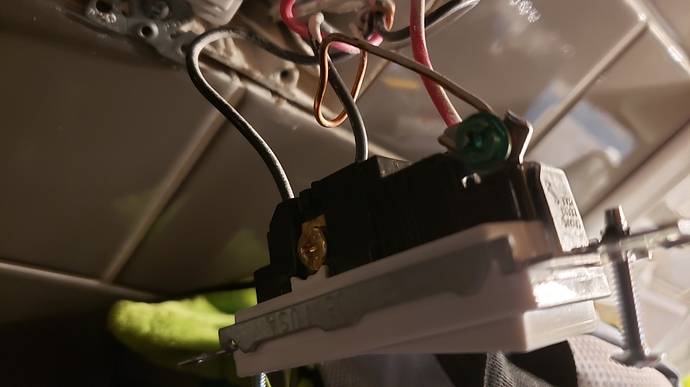 Dim lights when Inovelli is off, and dummy switch in either position. I’ve tried both a scene and basic on/off switch. Both end up the same. 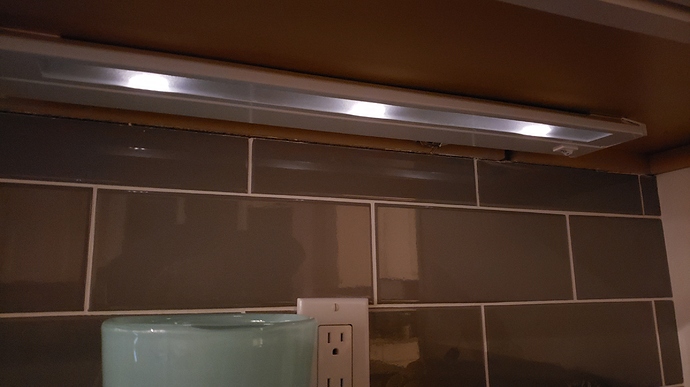 Hey @harjms – sorry for the troubles, let’s figure it out! I moved your post so we could keep the other post about the rapid on/off topic, but I’m happy to help in this scenario too.

FULL DISCLAIMER HERE: I can’t give out any electrical advice and take this as is knowing that I’m not a licensed electrician.

Let’s start with your first switch – this one: 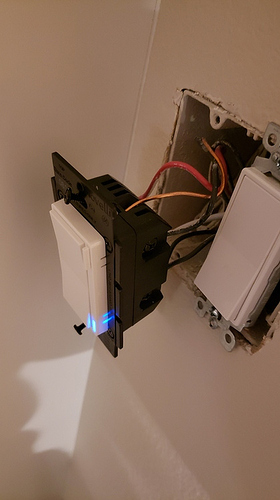 Just to verify (sorry, I have to ask – please don’t take offence) – you’ve checked the wires with a multi-meter to determine that the line is actually in that box, correct?

As for this switch: 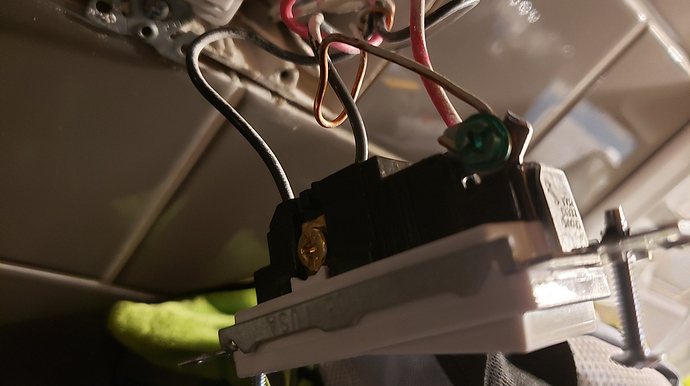 image.jpg1035×580 159 KB
Can you take a picture of the other side? I just want to make sure the other black wire is on the common terminal and it’s hard to tell from this picture.

Lastly – what load are you controlling? And do you know that approximate wattage?

For the second switch, can you let me know the total wattage here as well?

@Eric_Inovelli - Thanks for the quick reply!

I confirmed the Line is in the first box (I used a Klein Tools Voltage tester pen). This is where I placed the On/Off switch to ensure constant 120VAC is available. No offense taken! I’m usually pretty good at figuring things out, but it is kicking my butt. So, another set of eyes is good for me.

Below is the 2nd switch (dummy) opposite side. 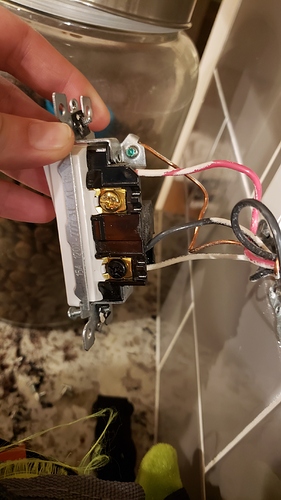 I confirmed the traveler and load (from Inovelli switch) with ohm meter and ruled the load going to the cabinet lights by ruling out what is already used.

The load is controlling 4 under cabinet lights that house 3 LEDs per light fixure. The wattage is probably minimal, but I do not have an accurate wattage number. The LEDs are from Amazon (https://smile.amazon.com/gp/product/B06ZYN2535/ref=ppx_od_dt_b_asin_title_s00?ie=UTF8&psc=1). I’d estimate 30 watts. 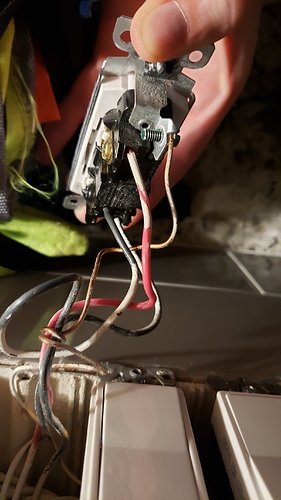 Yeah, this is definitely strange – it appears that you have wired everything correct, so I’m a bit stumped.

I’ve definitely wired this exact scenario up (line/load in separate boxes with an LED): https://youtu.be/M7V0n39XX40

I’ve passed this thread onto the manufacturer to see if they can put their thinking caps on to figure out what’s going on and I apologize that I can’t provide a better answer.

We tested out a ton of LED bulbs, Incandescent bulbs, etc – UL ran their tests, etc, so I’m not sure what’s going on here.

But, providing that URL definitely helps as I can order those bulbs and test too.

I know this doesn’t provide a solution right now, but I’ve definitely made it a priority to figure this one out.

PS – Sorry, I didn’t realize you created a new thread! If you want to send me a Google Video that would be super helpful too. Any and all data you can send would be amazing.

@Eric_Inovelli - Thanks for the help. Like I previously said, I have the same issue toggling on my garage lights (2 LED, probably 6.5W each) from the dummy switch, but it works from the Inovelli Switch. So far, I’m 2 for 2 wired the same way as above that are not working in a 3-way scenario. I’ve tried 2 switches (one scene, one basic) and both are doing the same. I’ll PM you a Google Drive link with a video (sorry for the size).

Not that it matters (at least I don’t think) this Switch wasn’t adopted into my Hubitat yet because I wanted to ensure if worked first. The Garage light (other 3-way is adopted). I’m using Hubitat C-5 (firmware 2.1.5.120).

Hey @harjms – could you try this wiring setup for me to see if it works?

This is a less common setup, but could be what you’re up against.

@Eric_Inovelli - I can give it a shot tomorrow, but not sure how successful it will be. I replaced a 3 way switch with the Inovelli Switch and wired it the same with the addition of the neutral line. If it was to be wired like above, wouldn’t the switch I replaced it with been wired like the above too? I’m not an electrician, so I honestly don’t know and I didn’t sleep at a Holiday Inn last night so…not an expert.

Alright, well since you haven’t been at a Holiday Inn in a bit, let’s not mess around with it. Especially if you’re positive the dumb switches wired to it prior were the same way you’re wiring it now.

I know for your LED bar load it’s likely impossible to test a different bulb, but for the other 3-Way’s is it possible to swap out your bulbs with different bulbs to see if there’s some weird incompatibility with the bulb you’re using?

@Eric_Inovelli - Definitely positive it’s wired the same as when the two dummy switches were installed (well again, with the neutral now for the Smart Switch). I’m going to PM you new videos. Ones with the current 6.5W LED Edison bulbs, but also with 60W Sylvania bulbs.

They both act the same.

MFG date is 0819. Hopefully I didn’t get a couple of cursed units and have bad luck picking 3 (the two mentioned above for under cabinet lights plus garage lights) bad units.

I have the exact same issue. Were you guys able to figure it out?

@gbenrus25 - Negative. Hoping Eric and team can figure out the MCU issue. I know I’m getting about 15 VAC that Powers up my lights, so the load or traveler isn’t really outputting 0 VAC. I’ll try my halogens when I get home.

I may be having the same issue. Can someone check out my scenario and see if it’s the same or if I need a separate thread:
I’ve followed the wiring diagram for my setup but am not having success. My line and load are in separate boxes. I’ve used my multimeter to verify these to be true. I’ve installed the inovelli switch in the box with the line and have connected the line to the line, the black traveler to the load terminal and the red traveler to the traveler terminal and neutral to neutral. In the load box I have a dumb switch connected with the load on the common screw and the black and red travelers on the other copper screw terminals.
These are powering a single 14w led recessed light

Hello. It’s the same scenario and no, we never figured it out.

Same. Dimmer fixed my 3 way on/off issue, but the reg on/off 3 way still doesn’t work as designed. I can program the dimmer for 3 way. It’d be nice if I could have the on/off force 3 way.

Same. I’m 0 for 2 with my 3-way setups with the Red Series.
Everything looks exactly as in the “3-way installation (Line/Load in separate boxes)” (with the addition of the grounding wires, not depicted, but assumed. Works fine when my dummy switch is ON, but non responsive when the dummy switch is OFF (Smart switch still lights up, but lights stay off)
Not sure what to think at this point.

So ultimately, the issue is when either is off (both are off specifically), the LED bulbs don’t come on.

BTW, if you switch the 2 travelers, the states won’t be exactly as I described above but would be same issue