Impossible to fit fan module in almost any fan

Can we talk about the fact that it’s impossible to fit the fan module into almost any fan?

I’m wondering if anyone has any suggestiong? Like aside from putting it inside the actual attic which seems like the only possible way to be able to attach the shroud. Idk if other people have shrouds that are the size of a milk jug, but normal size ones you can’t fit the module to the side of the bracket. And with wires coming out of either the fan or the ceiling (which you have to have both of course) it’s far too tight to fit it in. Like I don’t know if you could even force it if you tried and were okay breaking it (which defeats the purpose of course lol).

Were these just engineered wrong, or is there a way to do this? Because if so I have yet to find that way.

Can you take a photo of the canopy? I had no issues getting module in a couple different brands.

Make and model of the fan? Guessing this is a new fan as it doesn’t appear you had any issues when you installed in a fain in August, 2020.

I don’t know what the OP has, but I have four older fans from the early 90s that I can’t fit the canopy unit in. I’m just waiting and hoping they can create a Gen 2 model that is half or two-thirds the size.

One would think that with devices like the Aeotec Nano Dimmer, maybe they could get something in the 2.5 x 2 x 1 inch range. Although perhaps “dimming” a fan motor is a lot harder make compact.

I had no problem fitting it into multiple different fans previously.

I have fans with very small shrouds around the top and was able to get them in there, it is tight but mine work fine slid into the hanger bracket for the fan. my cover barely fits over them. 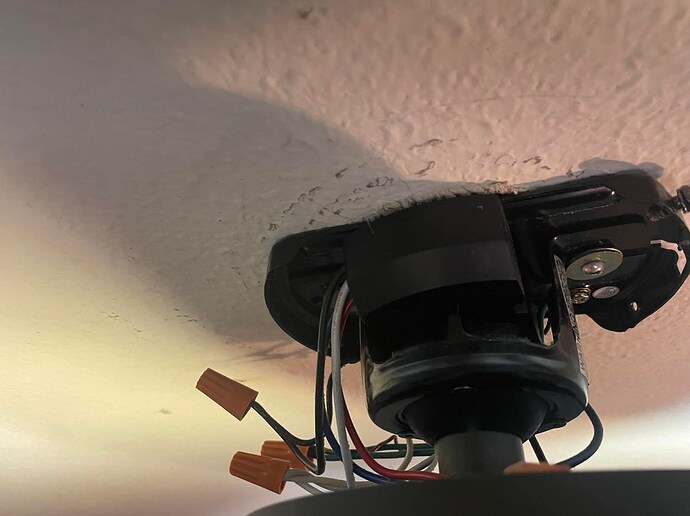 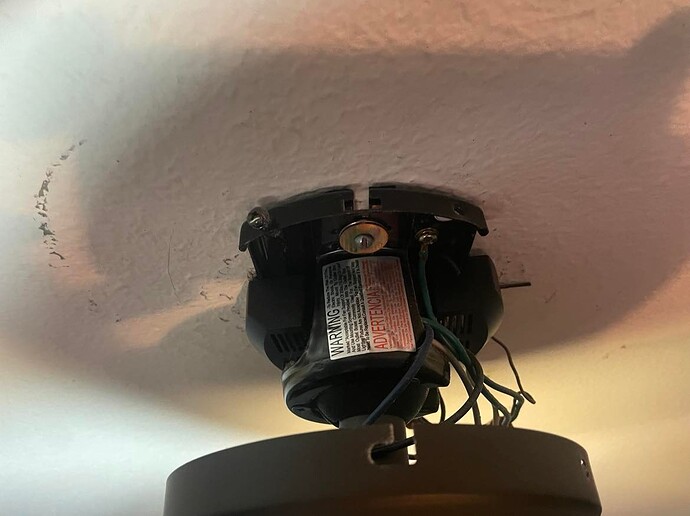 I’ll get pics in a bit, but this is about what mine is like. You have wires coming from the ceiling and also from the fan. So you’re trying to force this thing and essentially bend all those wires completely flat at a hard 90 angle, which might be a safety issue too. Yours is almost exactly like mine. How did you get it to fit?

Although thank you for your pictures! It gave me an idea. I saw your washers on the outside of the bracket, which gave me the idea of maybe putting some washers on the inside between the bracket and the mount on the ceiling which would give more space between to possibly fit it in. Even 1 washer might be enough just to allow it to slide in.

I’ll get pics in a bit, but this is about what mine is like. You have wires coming from the ceiling and also from the fan. So you’re trying to force this thing and essentially bend all those wires completely flat at a hard 90 angle, which might be a safety issue too. Yours is almost exactly like mine. How did you get it to fit?

Mine slides into that spot fairly easily and there is no stress on the wires. The fans I have had plenty of wire length and so did the electrical boxes. I think the other two fans even have the connections up in the electrical box and then I slid the module into the bracket. This module had to be replaced a while back and I wired it like this to test it and never went back to tidy them up.

Maybe your brackets were bigger? Idk. You have wires coming from both sides so it really doesn’t matter where they are wire nutted. You still have them there. I’m gonna try the washer idea I came up with. There just physically isn’t enough space there is the problem. I guess there’s just different sizes of brackets and I happen to have one that’s too small. Maybe if the wires from above came in at a different place than right in the middle because then there would only be the wires from the fan? It’s a lot easier for me to just add some washers to space it out than to climb in the attic and dedrill a hole or something. I had an issue with the 2 other fans and the only solution was to duct tape the module to the ceiling to the side of the bracket. My shroud on those was big enough it would work. But on this one it won’t.

Yeah my brackets are just big enough to accommodate with a little movement of the module inside of them, Hopefully the washers work for you. When I first installed them I did consider going into the attic and adding a junction box on top of the ceiling to wire them up.

Honestly I don’t find the modules to be any larger than the remote control modules that comes with most fans. And I think they’re all designed to fit into that little space pictured above. I just looked at the instructions that came with one of my fans and it actually says to put the module there.

I actually found the Inovelli module to be smaller and easier to fit inside the canopy than the 3-4 others I have used over the years. If you are having difficulty with the Inovelli one, then good luck…

So my fan mount must be much smaller than some others. It might be easier just to climb into the attic and put it in there. This one fortunately has really long wires from the fan, so there’s no doubt the wires could reach from the fan. Several other fans I was able to do it, but the module had to be duct taped to the ceiling. I had specifically picked fans that had a much bigger shroud to account for that. This fan I didn’t want to replace, so I’m stuck either spacing it out with washers to allow it to fit, or to go into the attic. I have 1 fan where attic access is going to be incredibly difficult if even possible to get over there because the blown in insulation is so thick. But this one should be fairly accessible.

This was my solution, not because it didn’t fit but because I had very large shrouds:

(EDIT: FAN IS SET ON LADDER, DO NOT HANG FROM GROUND WIRE)

My anxiety is through the roof looking at the fan motor hanging on with the ground wire.

It’s on a ladder (not shown). My bad for not denoting that.

Do you guys have the safety cable down there or is that just a Canada thing?

Interesting. All of our fans come with what looks like stainless steel aircraft cable that’s supposed to attach to a ceiling joist. I usually hang it off of that while I connect up all the wires.