I have been noticing that my LZW31-SNU is very warm to the touch; not quite hot, but DEFINITELY very warm. The adjacent dumb switches in this 4 gang box have no hint of warmth - they are room temp, and this switch was not warm or hot when it was a dumb switch.
Is this normal or is something wrong?
Note: I bought these switches 1.5 years ago, but due to project delays, was just able to install the first one last week. The switch has been somewhat warm since install; it now seems even warmer. It is hooked up to a single light, and the light is off, and the switch is warm.
The fixture it is hooked up to has 5 G9 50w halogens. Is that too much and should I replace those with LED’s?

It will be warmer than most since it is dissipating the heat through its case. Make note of the max wattage with tabs on and off.

The specs show 104 F as the upper end of the range. If you have a non-contact thermometer, check it with the switch plate off.

Can you say more about your installation? Is there a neutral wire, or are you using them in non-neutral mode?

If you’re using them in non-neutral mode, I STRONGLY recommend updating to the latest firmware. I had a LZW31-SN switch of similar vintage that had been sitting in my garage for a long time, and when I tried to use it in a non neutral setup I had some pretty crippling problems that I didn’t experience with newer switches of the same model. I ended up running a neutral wire, but it also seemed like firmware updates helped a lot; there have been several non-neutral related issues resolved via firmware updates.

I would expect the switch to generate the least amount of heat when the lights are off, a medium amount when they’re on at full brightness, and the most when they’re at partial brightness. Which of these conditions are you noticing the warmth in?

Comparing this switch to a dumb on/off switch is like comparing a light bulb to a rock. A dumb on/off simply has nothing in it that can generate heat, aside from internal resistance to the current flowing through, which is negligible. This switch has a dimmer and electronics, both of which generate heat. A dumb dimmer switch would be a more fair comparison, as those generally do generate heat when running at less than 100%.

should I replace those with LED’s

The energy efficiency difference between halogen and LED is so huge that I would basically always recommend replacing incandescent/halogen with LED, but ultimately that’s your call. If the switch is getting hot, that’s also an additional source of wasted energy.

The red devices measure both watts and the accumulated kWh. I don’t use Hubitat though so I have no idea how to access it there.

If someone has a link to a step by step way to obtain power consumption in Hubitat,

I suspect you are using Hubitat’s built-in driver. Its very old and generic without the extra features.

You need download the latest driver from Inovelli’s website, then you’ll be able to get the power and energy values (as well as many other advanced features)

You need download the latest driver from Inovelli’s website, then you’ll be able to get the power and energy values (as well as many other advanced features)

OK. I found this page: https://support.inovelli.com/portal/en/kb/articles/hubitat-device-drivers
and followed the directions. Now I have two Inovelli drivers listed on that page, so I think maybe I did this once before.

So now how do I obtain power consumption data out of the Hubitat for the light connected to the Inovelli switch?

In the Device Information, be sure you set the ‘Type’ to the new driver you installed and click ‘Save Device’ 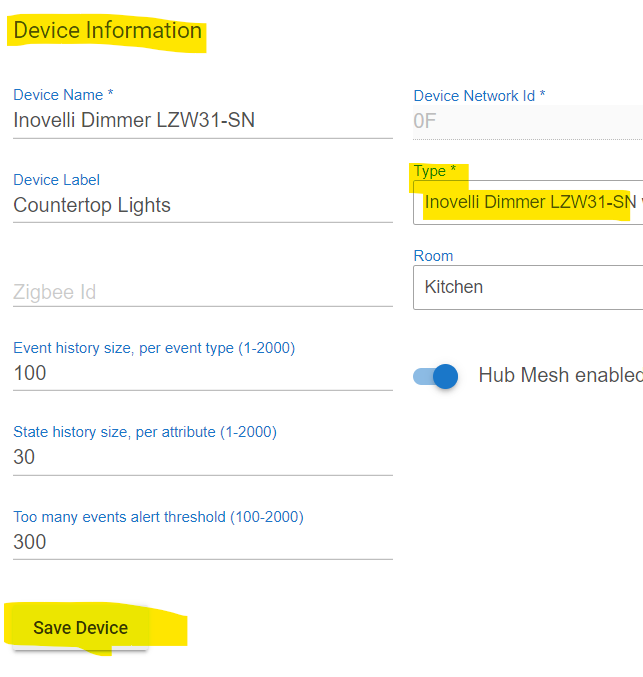 Then at the top of the page, Click ‘Configure’ to re-initialize with the new driver and then you should see Energy and Power on the right under Current States. You may have to refresh/reload the webpage

THANK YOU.
Now I see the energy number in the upper right. Appreciate it very much.