Hi All!
New here and looking for a bit of help.

I have a unique situation. I have the enclosed wiring setup in my home theatre. Connected to this is 9 zigbee pot lights that I’d like to control via automation. This means leaving power connected to the pot lights at all times.

I want to have switches on the wall, but with their relays disabled to keep power to the smart lights.

I bought 2 each of the LZW30 and LZW31 switches (not sure which will work) hoping to accomplish this, but not sure of the wiring now as I have power coming from the light it self.

Here is my existing circuit, however, I do not want to pull 9 pot lights to find which one the power is coming from, so would like to do this all at the switch box if possible.

Any ideas?
Thanks in advance. 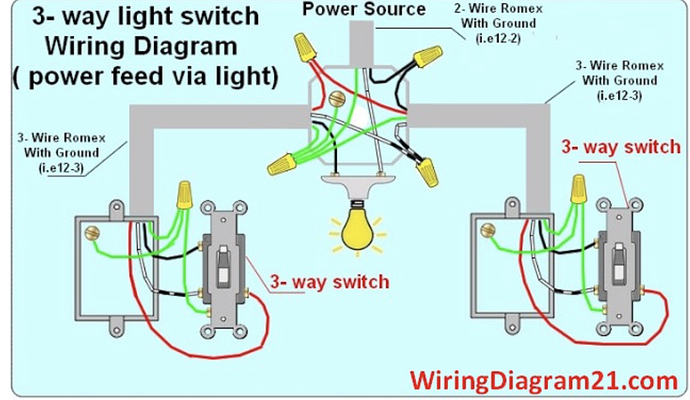 BTW, the existing 3-way switches are in double gang boxes with other lights that do have neutral wires. Maybe if all else fails, can I tap into another switch neutral wire to make the new switches act like simple signal switches to Hubitat then hard wire the theatre lights in the box to be permanently powered leaving Habitat to control them?

You mentioned that you bought both dimmers and switches because you weren’t sure which you were going to use. You need to use Z-Wave association to replicate the dimmer action to a constantly powered smart bulb. Since your lights are Zigbee, you won’t be able to use direct association, so you’ll probably have to rely on scenes. That being the case, a switch as a scene controller might be a better choice.

I don’t use Hubitat, so there may be more you can do beyond what I’m describing.

Maybe if all else fails, can I tap into another switch neutral wire to make the new switches act like simple signal switches to Hubitat then hard wire the theatre lights in the box to be permanently powered leaving Habitat to control them?

Yeah, uh, no. You can wire that using the existing switch leg wiring. It seems a bit complicated at first, but the concept is pretty simple. I’ll explain the concept here and if you have further questions or need it diagrammed, we can carry on.

You have power going to the light first. To solve that issue, you can wire the Inovelli as a non-neutral (which will require using a dimmer, in contrast to what I posted above). In the diagram you posted, you can put the Inovelli in the box on the right. That black is the hot there, so that goes to the Line. The white goes to the load, where it’s returned to the box.

Here’s the rub. You have to find the first ceiling box and rewire the white from the switch to the bulb. (In the diagram, it’s passed to the other switch, which you don’t want.)

So if you don’t like the non-neutral scenario I described above, you can also use two Inovelli’s. On the right side you power the switch by rewiring the white of the 3-wire to really be a neutral and use the red as the load back to the light.

On the other side, you use the black and the white to provide a hot and neutral to simply power the switch.

Then use direct association to associate the two switches.

In this scenario, you can use switches and don’t need dimmers.