I am running HA on Proxmox but have not done much with it since I initially setup early this year. Have some time finally and am wanting to get back into things so I decided to blindly update from 2021.2.x to current yesterday and it appears to have broken my Inovelli ZWave switches and Reolink integration.

The ZWave side I think is related to some error I’m seeing about S0 legacy key and S2 key does not exist.

Should I roll back or is there a quick fix here?

Check in zwaveJS and look at that setup. There were new key fields added so I think you just have to enter a S2 key.

Any idea where I get the S2 Key?

I don’t seem to have any S2 fields in there?

Maybe it’s possible those fields only appear if your Zwave adapter supports S2. Which adapter are you using?

Darn, that’s not it… I just dug through my settings and I don’t see anything to toggle or enable for S2 either.

Kind of a shot in the dark at this point just to kind of cross T’s, are you running the most current version of zwavejs2mqtt? Current version according to my end is 0.27.0. I am running it as an addon though, if you’re using docker the current version appears to be 5.10.0.

Appears I’m on 0.6.0 but cannot find anywhere to actually upgrade?

I show this in the Zwave JS section… Perhaps the Disabled host field is an issue? 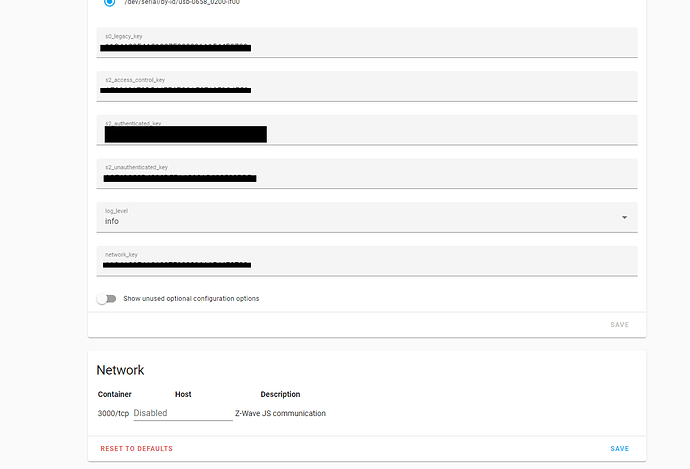 That is normal unless you need to expose the addon to to the host OS. Mine is disabled. In your screenshot I see the S2 key fields. Did you manage to update?

The Z-Wave JS add on is updated but the Z-Wave JS to MQTT is still at 0.6.0… Cannot find where to update that still

zwjs2mqtt should be an addon/container? I use HA Supervised so I’m not totally sure how Proxmox works. How do you update other addons? Do you use node-red, file editor, or nginx? It should be the same.

Generally there is an update button here when there is one available. I also have it set to auto update but that is not happening either.

The only other thing I can think of is uninstalling zwavejs2mqtt and reinstalling it, but in doing so you might lose your network. Hopefully someone else has an idea for upgrading.

I actually tried uninstalling it but when I did, there was no option in the add on store to add it again. So I restored from an earlier backup but am still having the same issue with not being able to update.

I remember there was an issue in the past with running both zwavejs and zwavejs tomqtt at the same time… Could this be my problem?

I would suggest just running zwavejstomqtt and uninstalling zwavejs altogether. You get everything in that package plus the awesome gui. It’s the same code underneath and the time delay for updates is minimal.

I definitely had to set 3000 as my network to get communication between the add-on and HA working: