Please select whether or not you think this light almond is close enough to matching Lutron Claro faceplates (Explanation below). 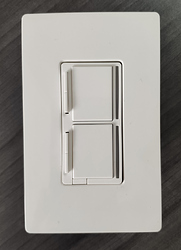 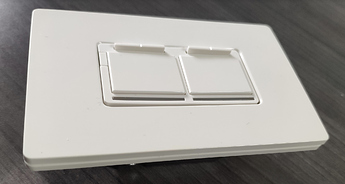 I’ve also created a video to try to capture all angles: https://photos.app.goo.gl/DE3PUfW3Du8DDuy37

The time has come all you light almond fanatics! We’ve made the rookie mistake of not realizing there was a difference between Almond and Light Almond when creating our paddles for Gen 2 products.

The dilemma was that in order to closely match Lutron Claro’s light almond, we’d have to place the paddle back into UL as the plastic needed to be verified again due to the different pigment. Luckily, the manufacturer had an alternate version that they just sent us that has already been UL certified to work and we want to know if it works for everyone.

I personally cannot tell the difference, but there are a couple people on the team who may have better eyesight than me, so we’re going to leave it to the community to decide.

For reference here is the current almond paddle in between the light almond faceplate: 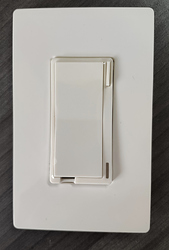 Voted, but curious what this means for timeline… Based on prior discussion I thought we were a lot closer than worrying abut color match?

Yes, I’ll need to check on the timeline for dimmers & on/Off’s for light almond.

We do have other color options right now that we’re shipped in Jan per the discussion you referenced, but as noted, light almond was not a part of that batch.

However, yes, we should’ve been closer than matching colors at this point, but we were back and forth with them on trying to match the Lutron Claro and then Chinese New Year happened, and then Coronavirus, so we haven’t had a ton of interaction with them around this project.

Now that they’re back, we restarted the discussion again.

Let me follow up with the team to see about actual timelines and come back to this post!

One thought on matching; based on suggestions on the forums here, I’m using several Gen 2’s paired with those GE enbrighten Add-on switches. It would be nice to get a reasonable match to those.
(I’m currently using the Gen 2’s with Eaton/Cooper Aspire ‘Desert Sand’ faceplates, the almond paddles are better than the white, but definitely a bit too yellow. The GE Add-ons are closer).

Let me preface this by saying that we are “locked in” to light almond with our decor choices, so that is the only color that interests me…

I like the Leviton screwless plates in light almond. The color appears identical to the Lutron plates everyone seems to love, but I and my wife both hate the “ridge” around the edge. The light almond paddle that’s included with this add-on switch matches them nicely: https://www.amazon.com/gp/product/B07H5S6MTH/ref=ppx_yo_dt_b_asin_title_o04_s00?ie=UTF8&psc=1 This seems to be the only choice for an add-on that both works with the Inovelli dimmer AND matches a true light almond. Or at least the only one I could find.

I believe you can get the Eaton plates in light almond, but I haven’t seen one in the flesh to see how true the color is. I’ve seen Dessert Sand and it is clearly not right. Note also that Eaton’s plates are midsize while Leviton’s are standard size.

Hopefully the Inovelli paddles will look as good in real life as they do in the sample photo. And hopefully they’ll be available soon!

Let me follow up with the team to see about actual timelines and come back to this post!

What did you find out?