Can I still use any of these dimmers in a Non neutral configuration? If the answer is yes does it matter which wire goes to live and which goes to load on the dimmer? I do have a bypass capacitor that I can use if necessary. I only need simple on/off on a schedule (Have a Smarthings V2 Hub) and dimming not required.

To answer your question, it should not matter.

Your wiring is not in the most common configuration. While there is no functional difference, It should be wired like this:
Reason is so when the “Air Gap” on the switch is “OUT” there is no power on the lamp fixture. 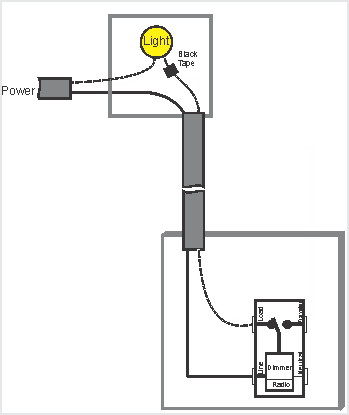 measured the voltage at the switch wires with an LED

@JohnRob, Thanks so much for your reply and appreciate your help. Yes, I measured the voltage with a Sengled smart LED bulb installed at the light fixture. Also if I use my electrical tester, it doesn’t show any hot wire at the switch. I will install an incandescent bulb and measure the voltage. Also I will wire according to the diagram above. I’m guessing I still need the bypass capacitor at the fixture for a LED bulb?

Will neutral have enough constant voltage to power up the dimmer switch?

The “polarity” of the connections have no effect on powering the dimmer.

The change with the incandescent is only for measurement purposes.

NOW… with a Smart bulb things are different Are you planning on having the dimmer control the smart bulb?

@Wicks
The way @JohnRob describes is the way it should be wired and @harjms’ suggestion is a good one. If you can get at the light, you should definitely re-wire it to switch the hot. While switching a neutral may not have violated the code when it was installed, it does now, for good reason . . . it’s dangerous. As John points out, you want the airgap to function properly. Wired incorrectly, the connection to the fixture(s) will remain hot.

I’m not sure a switched neutral would work anyway.

4042B: Grounded Conductors. Switches or circuit breakers shall not disconnect the grounded conductor of a circuit.

it be simpler to rewire the hot and neutral at the light?

Thank you to all!
@JohnRob I don’t intend having the Sengled smart bulb once I get the inovelli dimmer working. It is there in my current setup as I don’t have a smart switch/dimmer to switch my porch light on/off on a schedule. Going to replace it with a ordinary LED bulb (8W).

My question is if I’m not able to get to the light fixture (I’m going to try though) and change to switched hot, will the inovelli dimmer switch still work with the present switched neutral configuration like in the above diagram?

I understand. If you can’t get to the lamp fixture. Or its a bit of a risk, it will function fine the way it is. As I said the “conventional” wiring is what I showed.

BTW switching the wires in the light fixture has absolutely NO effect on the inovelli switch. It would simply be for safety when changing the lamp.

As for the Bypass. If needed it will have to go in the light fixture (regardless if you make the above referenced change). However if you chose a bulb on Inovelli’s compatible list you may not need a bypass.

Hi,
I installed my black series 2nd gen dimmer (LZW31) in above non-neutral configuration. I also wired a bypass capacitor across the lamp. I’m using a CREE LED bulb listed in Inovelli’s compatible list. I have installed the device handler and the child device handler in my Samrthings V2 hub. The dimmer responds to the new smartthings app on my phone.

All of the advanced settings for the dimmer in the smarthings app are default except. AC power type is set to Non Neutral and the switch type is set to Load only.

I have two major issues though.

As I mentioned earlier I only need smooth on/off functionality on a schedule. The only reason I bought the dimmer version is for the ability to work in a non neutral setup.

Any help is much appreciated.
Thanks,
Wicks.

Also forgot to mention that I tested with an incandescent bulb and another Phillips (non hue, non dim-able) LED bulb. The result was the same. Although the lamp turns off it still glows dim. BTW the original bulb is the CREE 60W Dimmable A19/E26 in the inovelli list.

Did you re-wire the fixture so that you are switching the hot, not the neutral?

@Bry No not yet, I want to do it as a last resort. Also not sure if this matters (just realized), my bypass capacitor is a Lutron LUT-MLC, Does it matter between Aeotec & Lutron bypass capacitors? But I’m using the Cree bulb 60W A19/E26 bulb in the compatibility list. Also to the same issue exists with the incandescent bulb. I’ve also read in other posts here about ghost lighting issues on the Gen 2 dimmers. Do you think a firmware update is needed? I bought my dimmers a week ago.

Thanks & appreciate your help,
Wicks.

I believe I read both good and bad things about the Lutron bypass on the forum. I went with Aeotec because that is the one Inovelli sells, so I figured it would work (and it did).

I don’t think firmware will fix your ghost glow; I’d lean more towards a new bypass, but I still would’ve changed the wiring while you were in the light fixture installing the bypass.

@Bry No not yet

but I still would’ve changed the wiring while you were in the light fixture installing the bypass.

I’ve discussed the wiring configuration with @JohnRob and he believes that things should work even if the neutral is switched since this is AC. From what I can recall, we’ve only had one other poster describe a switched neutral, but he was trying to use a different switch.

My thought is that Inovelli tests their products in known configurations. Yours isn’t one of them. So you are asking for help while admitting that your wiring doesn’t conform to how Inovelli states it should be wired. I don’t mean this in a bad way, as I understand that’s how you found it wired.

It seems that you can get at the fixture box since you were able to wire in a bypass, so you should also be able reverse the switched leg so that it is proper and safe. Who knows, not only is it the proper thing to do, it might even resolve your problem. I don’t understand how fixing something dangerous that would take about 3 minutes to do should be considered a last resort.

If it doesn’t work then, at least you can point out to Inovelli that something correctly installed isn’t working properly.

@harjms, There are only 2 wires coming into the ceiling light box. So there must be a junction box in the attic or ceiling which has all 4 wires. I simply attached the bypass at the wire nuts connecting the fixture and the wires in the ceiling box. This is my porch light, the roof tapers at that spot and not sure it I can get all the way in the attic. Or I will have to open the ceiling in the porch to access the wiring. It is too much LOE at the moment to get the porch light to work on a schedule.

I tried lots of LED & CFL bulbs lying around in my house and found one CFL bulb working quite well.This is the bulb that is working for me. Its a CFL bulb from many years back. 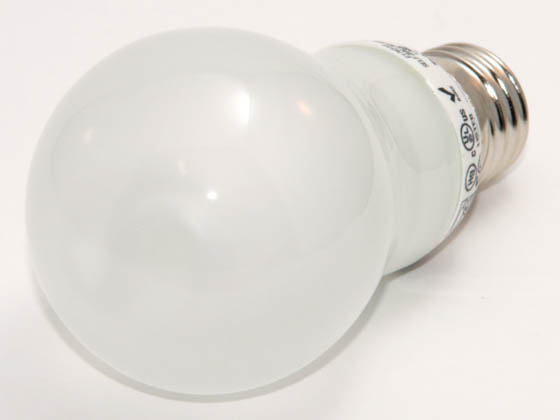 It also came on last night on a schedule last night and switched off this morning on a schedule. The dimming function also works somewhat as long as I keep the slider below 56%.

I confirm that @JohnRob (Thank you!) was correct, the dimmer doesn’t have an issue in the On/Off function in a switched neutral configuration. Mine works now with this CFL bulb. As suggested by @harjms, I also want to eliminate a possible issue with the Lutron Bypass, so I ordered an Aeotec Bypass yesterday. I will change it and see if I can get the CREE LED lamp to work.

BTW, the one consistent issue with all of the bulbs tested is that it locks up the Innovelli Gen2 Black dimmer if I move the dimming slider above 56%. I get a server error, please try again later in my SmartThings App. I have to then unscrew and screw the lamp back in (reset) for everything to work. Even at 56% the light is almost close to its full brightness. Does anyone have any idea as to why it might be doing this? Could it be the Lutron Bypass?

Thanks for your help.,
Senaka.

Does anyone have any idea as to why it might be doing this? Could it be the Lutron Bypass?

Just a question, but can you go above 56% locally (not using ST)?

I just tested, If I go above 56% locally, the dimmer turns itself off. This is the case with all the LED & CFL. The only difference with the CFL is that it completely shuts off while the LED stays dim even when off. I can actually turn the light back on locally with the paddle, no need to unscrew and screw back the bulb.

As long as I keep the dimmer slider below 56% no lock ups (ST) or no shut down (local switch) and on/off works correctly in both locally and app.
Thanks,
Senaka.

@Wicks - I’m curious if this is being caused by the Lutron bypass. I don’t want to point my finger at it, but a CFL should cause a lock up like this. I’d recommend removing the bypass to see if the lock up continues. It doesn’t change no matter type of bulb used (LED or CFL).

@harjms, Thank you! I will try removing the Bypass this evening. Then when I receive the Aeotec Bypass, I will try with it if the situation persists. Wonder why the short range in the dimmer slider (not saying the dimmer is the cause of it).
Thanks again.
Wicks.