Looking for second (and third) opinions on wiring

I am trying to install a ‘Red Series Dimmer Switch (Z-Wave)’ on a single light switch that controls 2 light bulbs, one at the top and one at the bottom of a flight of stairs (the switch is at the top of the stairs)

I’ve tried a bunch of different configurations of wiring but can’t seem to get this switch to manually control the bulb , nor pair with z-wave (it’s been seen on the network though).

I think I have some configuration needs as well, but I just want to double check I am wiring this up right. What would you guys advise I do wiring wise based on this ‘before’ switch ?

Thanks so much, hope the picture helps! 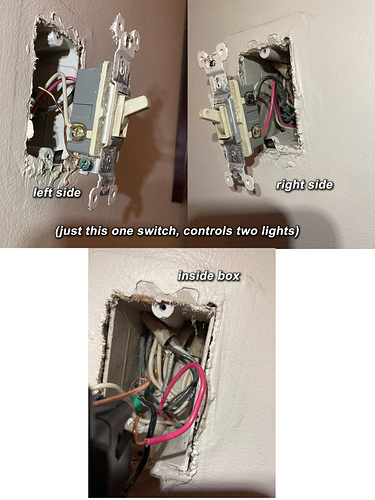 Is this a neutral or non-neutral setup?

Thanks for the reply! I believe neutral? But I’m not positive to be honest. The house was built in 1989, and all of the boxes have these white wires in them, so that’s my best guess but I don’t have any solid knowledge one way or the other.

@thx - Could you take some pictures at a different angle? I see two white wires, and it looks like it could be the neutral, but I’m not sure if you’re setup with line going to the light first and dropping off the neutral in the light box. Either way will work, but we’ll want to ensure we have the correct wiring. Line may be coming down on “WHT” which is why we’ll need more information. Do you have a multimeter to test with?

That sure looks like a 3-way switch, you are sure there isn’t another switch somewhere at the bottom of the stairs that doesn’t control the same lights? Neutrals don’t connect to standard switches. Most simple on-off are typically labeled as such, and this has a common terminal.

positive. Although that was my suspicion as well based on the wiring/switch research. For context the bottom of the stairs is the entrance to our basement, and I’m thinking it’s possible that after it was finished (before we moved in), a switch at the bottom of the stairs which now controls the basement only lighting, used to be tied into this switch? But currently no switch controls the 2 bulbs other than the one at the top of the stairs. From my novice research I’m thinking it’s entirely possible that the former traveler wire from that old possible three way switch was repurposed somehow into this second light bulb? Just guessing though, I’m pulling out the switch again now to take a better picture of the inside per @harjms 's request. You guys rock! really appreciate it, is there a ‘buy a beer’ function in the community yet?

As @timrudd12 mentioned- This is definitely a three-way switch. It could be setup how you’re describing, but that means there’s a wire nut somewhere between the switch and the light in order for it to “connect”. Are there any switches in the house that you’re like “where TF does this control?”. It may even be helpful to pull the bottom of stairs switch to see if there’s just a bundle of wires.

That’s possible. What you will want to do is figure out which of the load wires (red or white is connected to your bulbs, it won’t be both or your lights would alternate when switch is toggled). You do need to figure out if you have a real neutral though in the box as the switch (not dimmer) requires it. Is there a white wire that is not connected to the switch capped with a wire nut in the back of the box? The unused traveler from the 3-way could then be capped instead.

Good idea, I’ll do that too.

Ah, yes there are definitely capped white wires in the back of the box. Pics incoming, thanks again guys.

@harjms @timrudd12 more pics of the inside of this switch attached. going to get pics of the switch at the bottom of the stairs now (which does not control these two bulbs) to see if theres any insight to gather there.

And to answer @harjms question, no, there are no switches to say ‘where TF does this control’ . 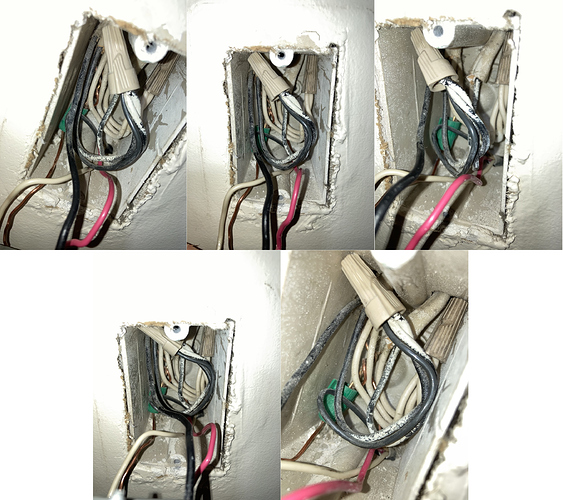 Attached photos / tagged you with those pictures. Definitely a a bundle of white wires that are capped and not wired to the switch currently. And yes, I do have a multimeter if that’s helpful.

Yeah the white bundle will be your neutrals. If you have a multimeter it should be pretty easy to determine which of the red and white connected to your switch is connected to the bulbs, otherwise you can trial and error it with that switch and determine by disconnecting and capping one and seeing if lights still turn on and off or just stay off.

What would the multimeter show to advise which goes to the bulbs (sorry, complete noobie here).

What are the possible options in your eyes? with the now 5 wires, the new neutral going to the neutral, the copper to ground, and then what, distribute the remaining white/black/red between load and line? Is the black for sure the line? Possible that both the white and red go into load or no?

Thanks again, uploading pics of the lower switch now (which is a way newer box, now that I’m looking at it)

How many wire bundles coming into the box? Just two?

Gotcha ok thanks @timrudd12 . Attaching pic of the downstairs box @harjms (which does not control these two bulbs) for any insight. Seems to be completely separated, but I’m no expert. I did see a note on the breaker that says ‘basement recapt’ which does not control any of the two switches I’ve shown thus far, so I’m guessing it’s possible something was capped somewhere?

The bulb shot from the downstairs bulb seems to have a white and a black, so would you think based on that , the white is the load and the red is the one that should be capped? 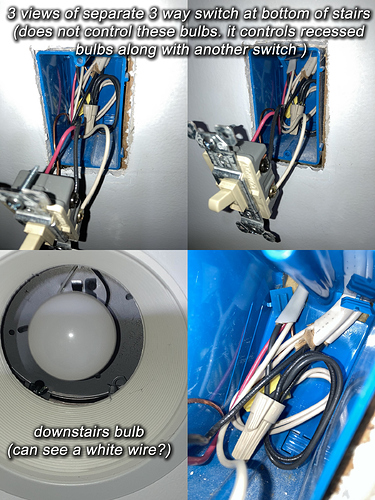 I looked at the “more pics” pics. It looks like you have 2 separate Romex connected to that switch. It was a bit tough to see into the box, though.

Looking at what is connected to the switch, is there at least one conductor from both a 2-wire and a 3-wire Romex connected to it?

@harjms from what I can see, there are 4 ‘sets’ of wires coming into the box, each has a black/white/copper, and 1 set has a red (the one coming from the bottom of the box, ‘set 1’).

the white is the load and the red is the one that should be capped?

I don’t think that is the case. The bulb requires a neutral to power on, and what you’re seeing is the pigtail inside form the can light. Either A) the electrician ran out of 14/2 and used 14/3 with a three way switch. Instead of capping the line, he/she just connected it to the switch, but then it would be powering up the other line to who knows what.

I think the downstairs fixture is wired correctly and it doesn’t look like there’s an extra set just hanging out in there.

@Bry more detail on the incoming wires if this helps. Really appreciate you guys with all of the replies!