So I have 11 red dimmers (and 1 black), all gen 2. I use them in the HE platform (C7). I’ve finally set them all up and everything is working good mostly. My only issues I’m having now and haven’t been able to figure out is LED related.

I setup a rule to turn my LEDs when all my locks, windows and doors are closed and locked. If any are open/unlocked they go yellow. I see the event/trigger/action in the logs when anything changes, but sometimes the LEDs don’t change. Is it an issue when the hub not being able to send that many signals at once?

Can you post your rule so the Hubitat folks can see how you are trying to implement it? 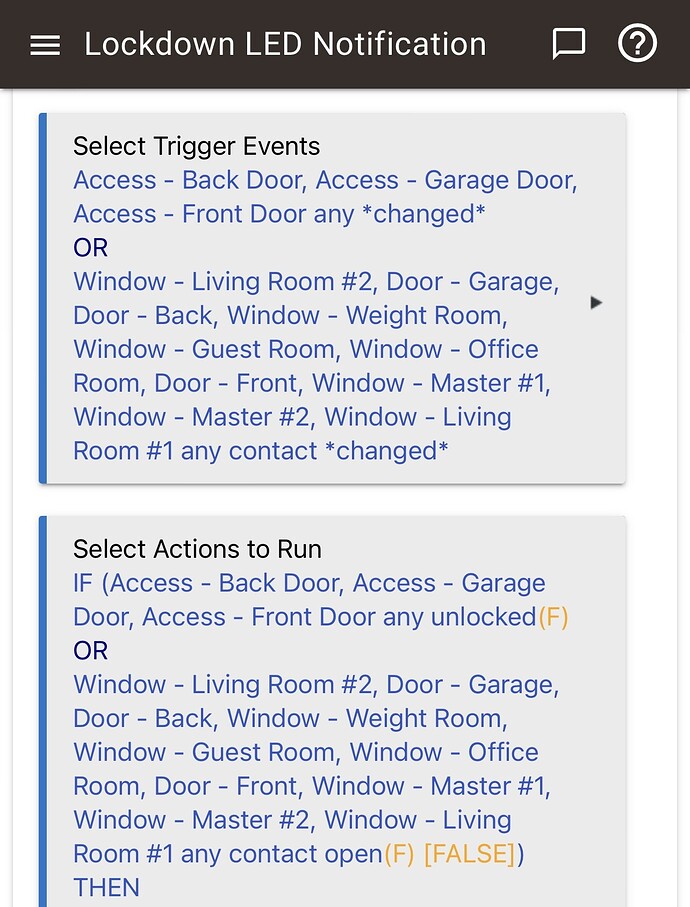 Here’s the log from last night. As you can see the trigger and action goes to the hub, but for some reason it won’t always change the LED Color that is listed. It’ll always change at least one, sometimes all, but it won’t be consistently all

Welcome to the world where multicast would help this problem.

One thing you can try, which is what I ultimately did at my last house, is to build a “Group” with all the LEDs assigned to that group. (Note: maybe not the most efficient way, but it worked for me) For each of my devices, I created the child LED by setting up each device the same for each notification. Notification 1 was Green, Solid, 10 Seconds (or something similar). Notification 2 was Red, Pulse, Unlimited. Notification 3 was Purple, Chase, 20 Seconds, etc… After defining (red series only), the notification child was created under the physical device in Device Page.

I also had two hubs running in one network using hub-to-hub setup. Not sure if that helped my z-wave network, but for most of all my devices (probably 22 reds), all the indications would function. We used Alexa “Good Night” to turn off all lights and then run Notification 1. Almost every time the LEDs would be Green for 10 seconds.

So I currently have a group setup for all the LEDs already. I simply did this by toggling on theCreate Child Device” setting for each switch… I then just created a group via Hubitat’s internal app and included all those in there. Would that work the same, or would you suggest going through each notification setup for each switch instead?

I haven’t tried that way. It was over 3 years ago when they first came out so that’s the way I did it. I think the later drivers made it easier. Definitely give yours a try.

I think the issue comes down to the hub and its lack of multicast. I’m pretty sure HA excels in this department.

That seems to have worked. No issues after a couple tries, so seems promising! Thank you @harjms!

Quick update… I did have issues again using the “Set Color” vía tule machine with the Child Device. Utilizing @harjms way of using the “Notifications” (1-10, or how many you need) and creating new Child Devices and toggling them as a switch instead has worked non-stop, and much faster.

Just a heads up for anyone having the same issues…