I have a LZW30 connected to a three way circuit powering accent light outlets, Christmas lights etc.
Using the most current driver tried both Inovelli official and Hubitat’s baked in ones. There also doesn’t seem to be a parameter for Neutral/non neutral and single/toggle 3 way/monetary 3 way. Does it just know? The LZW31’s need to be told so I’m a tad confused here.

Connected as instructed in the initial manual,

Everything works nicely if there is a lamp/etc plugged into the outlet. With nothing plugged in it acts a bit funny. In two ways

Box 1 3 gang definitely the hot box. Lots going on in there, but connected to one 14/2(hot) and one 14/3(presumably out to the other switch) 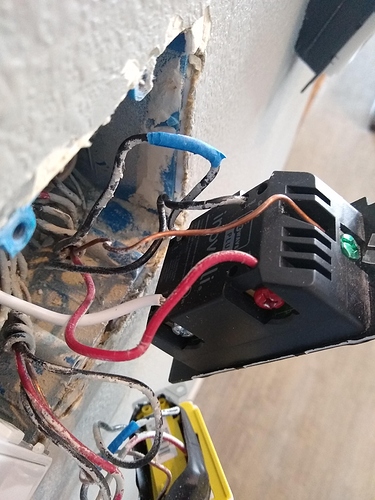 The LZW30 does not work without a neutral, hence no setting.

@StEvilRowe - I had the same issue. I ended up having to install AUX switches to resolve my LZW30 to recognize the 3 way. The LZW30 is “supposed” to recognize a 3 way and auto configure it. However, no matter how I swapped things around, it would never recognize the 3 way configuration. I wished it had a similar param 21/22 change, but it doesn’t.

I recommend swapping traveler wires and reset the switch. Sometimes it will recognize it. Otherwise, opt for an Aux switch.

Just thinking about your symptoms. I don’t have a LZW30 so I’m just supposing, but it sounds like the issue is due to having nothing connected to the outputs.

Now I’m really guessing, but perhaps a bypass at the receptacle might work.

Yea, I couldn’t seem to find anything in the forum about the LZW30 and outlets. Guess I’m just a special kind of guy for trying it

Switching the travelers had no effect.

Not sure what you mean by a “bypass at the receptacle”?

The Non Neutral dimmers requires a “bypass” at the load to keep a small amount of current coming out of the dimmer. Helps make up for the lack of neutral.

I understand you have a neutral but perhaps the dimmer needs a small current to know what is going on with the load. However, just a guess on my part.

I wonder if a receptacle with a built in night light would work?