Not related to the OPs issue… But what is the latest version of the firmware for the LZW30-SN.

I bought a std red series switch, added the device handler (I have around 10 of the gen 2 red series dimmers). As a side note, when I added it to Smartthings, it showed up as a thing, not a generic switch, and never asked for the qr code. I had to do a factory reset, then added it, then added the device handler, and set the handler for the switch through the IDE. Also one of the plastic screw retainer tabs was missing on the screw for attaching to the junction/plug box. So either there is a quality control issue, or this was a used unit that was resealed and sold (I bought it through Amazon)

None of the above is really an issue for me, it is working, but what struck me as odd, is the firmware version… From the Device settings in the Samsung IDE. Note the version states 1.20 … latest on the web site is a beta 1.19 … Not sure whats going on here…

Hey @ljvb – I split this from the other thread as it was a Hubitat thread and I didn’t want people to get confused.

Yeah that is weird… can you tell me what the date code is on these and/or when you purchased them from Amazon? It should’ve picked up the handler, but I’ve seen it rarely when it doesn’t do that.

Also one of the plastic screw retainer tabs was missing on the screw for attaching to the junction/plug box. So either there is a quality control issue, or this was a used unit that was resealed and sold (I bought it through Amazon)

Interesting – well Amazon does do a crappy job of understanding what is used and what isn’t… we’re trying to get it so that they just send all returns back to us, but to my knowledge there isn’t a way.

Do you remember if you broke the plastic seal on the box when you opened it?

None of the above is really an issue for me, it is working, but what struck me as odd, is the firmware version… From the Device settings in the Samsung IDE. Note the version states 1.20 … latest on the web site is a beta 1.19 … Not sure whats going on here…

Ok, yeah this is strange. Depending on when you purchased this and/or the date code, it should either say: 1.16 or 1.19. I’m not sure why it’s saying that in IDE

I made the purchase on Saturday Sep 4th.
This is the link to the purchase
https://www.amazon.com/gp/product/B07T26MVYC/ref=ppx_yo_dt_b_asin_title_o01_s01?ie=UTF8&psc=1

The seal was intact. I am somewhat familiar with tamper evident seals (there are competitions at Blackhat messing with them… it’s fun). It was identical to the seals on the Fan/Light switch I purchased (on Amazon) and the last 2 Red series dimmers (purchased through the Inovelli store directly) within the last month. Which is why I feel it is more likely a quality control issue versus a return… I compared the seal stickers on the amazon sold items to the ones purchased through you guys. The sticker seals are identical as far as I can tell. The one thing I guess I should mention, is that you can carefully remove the stickers without tearing the packaging.

Not sure where to find the date code…I did attach the sticker on the box… oddly, none of the other switches I have purchased had this sticker as far as I can remember.

I do have an Aeotec zwave stick… I can throw on a VM (all my machines are Macs, not a VM on the Mac, I have had issues with the software USB passthrough that Fusion uses, rather on an actual Vsphere cluster where I can use VMDirectpath to pass the USB through directly to.a windows VM) and poke around directly to see if it is just the IDE that is reporting incorrectly. But it won’t be till the weekend as a certain child is utilizing my laptop for school, he has his own on order getting here later this week. 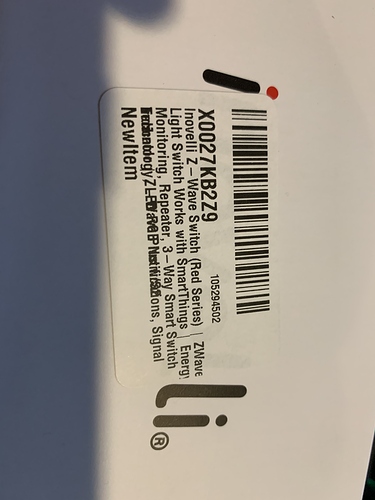 Okay, so I rebooted my macbook into windows and ran the firmware update process (well short of actually updating).

Is there actually a 1.20 firmware? 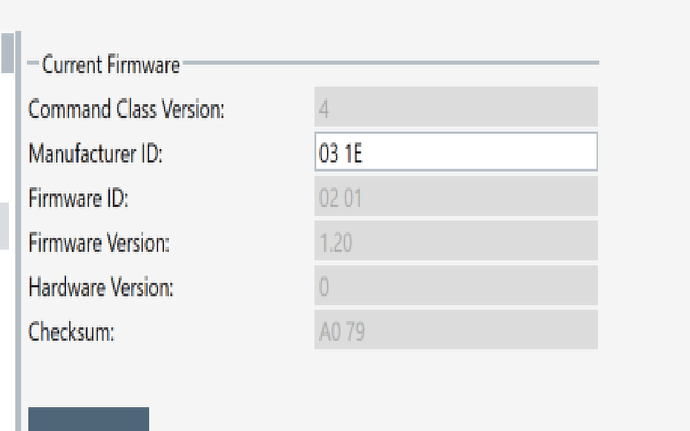 Yeah, this is strange. We’re checking with the engineer tonight. Quite possibly they just named 1.19 to 1.20 for certification, but that seems strange that they didn’t tell us.

I’m also wondering who put that barcode over the top of the logo on the box. Is that how it came to you? I’m guessing so because that’s an Amazon barcode. However, we print our own on the back of the box. Just makes me curious why they did that.

We haven’t had any issues with counterfeiting, so I’m not as concerned there. We did have a large scale fraud operation against us where a ring of people used stolen credit cards to purchase our Black Series switches (Secret Service is involved) but nothing with the Red Series. I’m creating a separate post about that shortly.

I can tell this is new packaging (red dot over the “i” – whereas our old packaging it was black), however, so I doubt this was a used item as those shipments just arrived. I will address the QC issue with the team around the plastic screw holder missing.

Date code is located on the front of the switch at the top left (should be a series of four numbers – my guess would be 0820 or 0920).

Thanks for bringing this up – we have a call with the manufacturer tonight and I’ll shoot them a PM as well to see.

Thanks for bringing this thread back up, I knew there was one I needed to respond to.

Good news is 1.20 is what was put on there. We talked to the engineer and he said he made a slight tweak (would’ve been nice to know!)

Basically it was a bug that allowed the factory to determine whether a devices Z-Wave IC is good or not good during testing. So, not a consumer facing bug.

Thanks for getting back to us. It really is the difference between other manufacturers (especially massive ones like GE and Leviton who I don’t think I have ever received a response for, for anything, none smarthome related inquiries) and yourselves.

I was just raving to my wife about this; transparency and communication is so refreshing. This is how loyal customers are made

Is this screenshot from a document that is customer-facing? I’d LOVE to get my hands on firmware change logs to understand what is going on.

For example, that specific screenshot tells me how I can have the switch go to “white” from WebCore wheras when I do setColor to White in WebCore it goes to Red.

I agree. Release Notes like this are helpful. The only thing to add for Inovelli is to note “Not Released” for the ones that never hit the public streets.

@EricM_Inovelli – when you get a chance, can you update the KB articles with the change-logs?

Is this screenshot from a document that is customer-facing? I’d LOVE to get my hands on firmware change logs to understand what is going on.

Agree – no, this was an internal document from the manufacturer. We had no clue they updated to 1.20 which was appalling. When we asked, this is what they sent us.

The only thing to add for Inovelli is to note “Not Released” for the ones that never hit the public streets.

What do you mean by this? Like, “here’s what we were working on, but we didn’t release it?”

What do you mean by this? Like, “here’s what we were working on, but we didn’t release it?”

I think he means if there was a release that didn’t pass Beta, or was skipped, then maybe say Firmware 1.19.1 - Skipped, New Firmware 1.20…maybe so that the average person doesn’t assume they’re missing a firmware? Possibly?

Yeah. Many companies have firmware that was never released…as in Public Release are are internal only. Though they still often have fixes that are important but do not affect large numbers of users or had a short shelf life in testing etc before another release. All the notes are important though for all releases, my point was just to list them all and to avoid questions as to why nobody was informed or cannot find files or info on a previous release, just mark it as not released in some way. Dunno haha. Just my opinion in the way I like to receive release notes for the software and firmware stuff I deal with every day at work.

This page features information regarding the beta firmware for the LZW30-SN that was released on 07/06/2020. This firmware is intended for users that would like to test the fixes and features included in this release before it goes into production....

@EricM_Inovelli I see 1.21 on http://files.inovelli.com/firmware/LZW30-SN/Beta/ Can you post a KB article on the new firmware? You can’t sneak anything by us.

LOL! Sneaky sneaky! I just noticed the 1.20 that came on my new switches and had a “wait… I don’t remember that one” moment. Then found 1.21 when I looked at the firmware files as well. We need a change log!

Now to add another wrench to the works… the same switches that were reporting 1.20 under smartthings are reporting 1.47 under Hubitat. I just switched over the other day, so I am still learning Hubitat.

I’m guessing this may be a red dimmer and not red on/off.

Yes, I have about 10 of the Red Series 2 dimmers and 1 Red Series switch.