LZW31, 3-way toggle(dumb) 2nd switch has to be "on" for smart switch to power the light

UPDATE – Got this working. It was a combo of setting the LZW31 properly with Smartthings and wiring the dumb toggle correctly.

I have a LZW31 set up in the 3-WayInstallation|DumbSwitch with line/load in separate boxes.
https://inovelli.com/wp-content/uploads/LZW31-SN/Wiring-Guide-Dimmers.pdf , p4

Should the dumb switch act like a toggle or does it have to be on?

Did you change the parameters 12 and 13 on the switch to act as a 3 way and neutral?

See attached from my Hubitat for example.

Thanks, I do have the same.

@rowdster - Well dang if it’s still acting that way I feel you have the line going to the dumb switch first. Does the light on the dimmer illuminate when it’s off (dumb switch)? You should see a faint light coming off the Inovelli. If not it’s probably switched and you may need to rewire or swap the switches.

Yeah, good for you to ask, I confirmed the line vs load with my voltage meter, and I’m certain the smart switch has line and the dumb switch box has no line, only “relay/load”.

The smart switch stays on, lit, and active at all times. When toggling on, It goes bright, animates as if it is turning on the light, but the light just stays off until the dumb switch is toggled.

Dang…well I’m sure someone will ask, but I’ll beat them. Can we get a drawing and photos?

Here’s two pics, one with all switches off, dumb and smart. The next photo is turned on from the dumb switch ( on right) 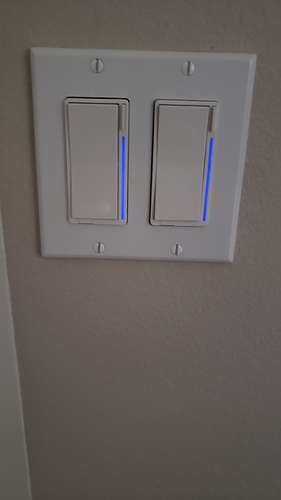 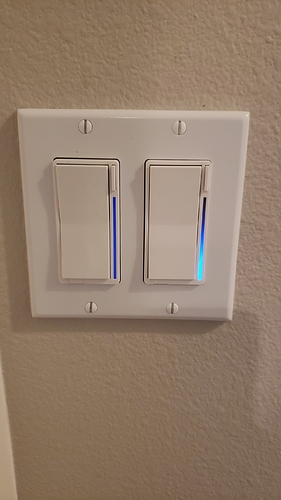 How dim will it go, can it go dim enough to barely provide enough light at night? I’ve had a few dimmers which wouldn’t seem to go below about 25% even though they said they were at 1%.

@Terk - I feel it’s more bulb dependant and here’s why. I replaced the guest bath bulbs with 4 new dimmable bulbs. Turn on, super bright. Lowered it down to like 35%. Worked great. Turned off and continued on. Other half started cussing at the light switch and oeessingit a bazillion times to get it to turn on. Well it was on, but the bulbs wouldn’t turned on until I raised the level to about 70%. Turned off, turned on. Works

I’m having the same issue as @rowdster. Received the Red Series Dimmer this weekend and trying to install into a standard 3-way switch with load and line in separate box with neutral wiring. I’m replacing a Zooz On/Off S2 switch with the dimmer switch. I thought it would be pretty straight forward since you don’t have to re-wire the Zooz S2 switches.

I just want to report that I had my dumb toggle switch wired incorrectly! I am so happy! Thanks everyone for your help!

This wiring on the dumb switch is now working.

The tape black wire is wired to “common” on the switch and it goes hot when the LZW31 is “on”. Red seems to change hot based on swapping the dumb switch. 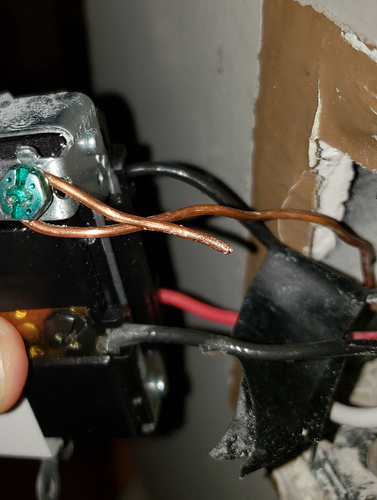 This and the ballast knowledge gives me the confidence to go after 4 more switches!

Quick question, but did you change Parameters 21 and/or 22?

Sorry, I’m diving in mid-convo and may have overlooked some of the facts, but what Hub are you using?

Hey Eric, no worries I know you guys are pretty busy getting those orders out. I’m using SmartThings V2 Hub. I changed parameters 21 (AC Power) & 22 (multi-switch) using the SmartThings Classic App, I also tried from the Switch itself.

My setup - chandelier stairs light with standard bulbs with neutral wiring. Line & load in separate box. I previously had a Zooz On/Off S2. Wanted to switch from an On/Off to a dimmer to replace the Zooz but no luck.