Hi,
I have an LZW31 running v1.48(updated today using a stick before adding to Hubitat) that doesn’t show up in the list of available devices when trying to set up a button controller to work with my Hue white and color outdoor flood light added to Hubitat through hue integration app and updated yesterday before adding to Hubitat. I can operate the light through the Hue app and the device settings within Hubitat.

Here’s what I see in the list of available devices:

Here’s what I see in the device settings of the LZW31:

Actions taken so far, I have hit the refresh button, the configure button, power cycled the switch, disabled the internal relay, enabled the internal relay, rebooted the hub, rebooted the Hue hub, stood on one foot while spinning a plate on a stick, created world peace (it was brief so you may have missed it), and scratched my head in wonderment. That last one really didn’t help, by the way.

I also tried doing this in the Simple Automation App and it doesn’t show up there either. This switch was just taken out of the box today, updated using the z-wave stick method (ran the update 3 times), and I gave it 10 minutes before excluding it from the pc controller/stick.

I have eight LZW31-SNs that I’ve never had an issue with and this really has me stumped. Any help would be appreciated!

You mention it’s a LZW31. There are no buttons to control with this model as it doesn’t support scenes. You need the -SN to have scenes.

Thanks, James,
Ugh, that’s what I was thinking but I thought I’d at least be able to set it up to operate the smart bulb (on and off through the hub) that’s on the circuit without cutting power to the bulb. The website says it’s smart bulb compatible but I don’t see how this is compatible if the only configuration is to cut power to bulb. Unless they mean through z-wave association, which this bulb isn’t zwave. 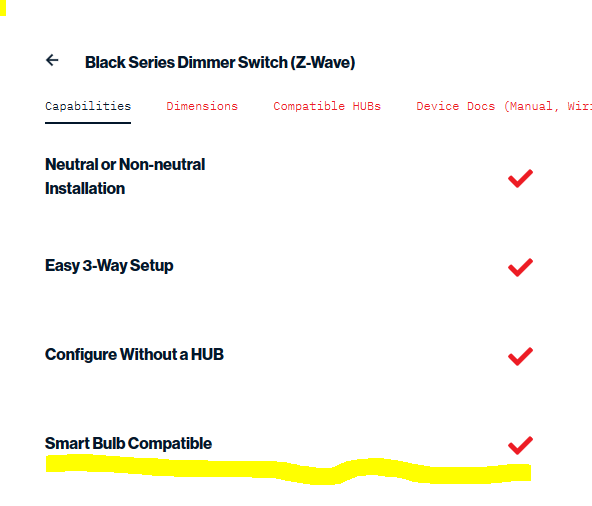 So I would see if you can utilize the Toggle in Rule Machine vs. setting up a button. Similar to if toggled on then turn on light bulbs, but you may need to rewire and provide Line to the bulbs vs. providing load to the bulbs.

I can confirm the with local relay disabled, the toggle on rule won’t work. So we may need to move the load wire to the line port to provide full power to bulbs then use rule machine to toggle on or off.

I believe you’re right about the association but we may be able to setup something in RM. or buy zwave bulbs with association support.

James,
Thanks, I’ll just get an SN since there are quite a few things I want to do here and repurpose this switch.

If the z-wave association is the only way to use with smartbulbs, they should add a footnote to that effect. I can repurpose this one, which is fine as it’s going to be used in combination with a motion sensor to turn on dumb lights in my utility room. Unfortunately, I now have 3 more of these that I can’t use as they were going to be deployed in same manner as originally posted.

Thanks for your help!!!

Also, in this case, changing out the bulb isn’t an option. Here’s the light:

I’m not familiar with Hue, but doesn’t Hubitat have a tie in with Hue?

Basically, you want the dimmer to control this bulb (just on/off? or color too?), but also use buttons from other switch to turn it on or off.

I feel if you’re not needing to control it from the Black Series switch other than maybe on and off, then I think we can re-wire the outlet to provide constant power to the light. Hue controller will control it on/off and we can just set a rule in Rule Machine If condition of toggle is pressed up, then turn on Hue Bulb. If pressed down, turn off Hue bulb. Color will not work. A scene switch would have to be used. e.g. press up twice, turn to daylight, press up three, turn to bright white, etc…

I could totally be misunderstanding the end goal though. I haven’t started drinking yet either…

Also check the chart out.

You’re awesome! That chart is what I should have seen before ordering the switches. Definitely going to order a few more LZW31-SNs to do what I want to do and employ one of these non SNs to my utility room. Now to figure out what to do with the other 3. I’m sure I’ll figure something out.

To clarify more on my end goal… My shed (as my wife put it, the Taj Ma Shed) or workshop needs better lighting outside that can be controlled at the shed and from the house. Too much to run a hardwire so smart stuff is the best route. Since I’m going that route I figured I can set up motion sensors and for the lights to change color where the motion was detected,in this case, motion detected at shed door, purple, motion detected behind shed, red and for the LED strips on the switches to follow suit. That way, when I’m watching tv, if I see the LED strip in the family room turn red, I’ll know that someone was behind my shed,I live in a small city and some people don’t always abide by property lines. I also want to be able to dim the light, and in this case, a smart bulb would need do it via the hub. And now that I am going with the SNs, I’ll be able to set scenes at the switch.

Thanks again for posting that chart!