LZW31-SN will not exclude from hubitat

Hi,
I’m in the process of updating the firmware for the LZW31-SN via the exclude, include to z-wave stick, then include back to hubitat. I’ve been successful updating two switches so far. However, the next one distance-wise is the living room and it will not exclude from hubitat and neither will the two that are 2 feet away from that one. The hub is one floor down in the basement and right above it in the dining room is a zwave repeater. 15 feet from that repeater is another repeater, then 5 feet from that is the living room switch. I had no problems including the switches (after installing the repeaters) but have tried a couple dozen times with no success. The switches operate just fine using the physical switch and via app. Crazy thing is I just added another LZW31-SN on the second floor and it included right away,like it was just a few feet away from the hub.

Now I’m afraid that if I get the switches excluded to update the firmware I may not be able to re-include them in hubitat. (secondary worry, I know)

Any help is greatly appreciated.

Any reason why you’re excluding it to flash? If you add the z wave stick as a secondary controller, there’s no reason to exclude from Hubitat.

I was following the instructions as posted in the thread and was feeling comfortable with the process. I only have 4 switches (of 6) left to go and the three I mention above are within 2 feet of one another. I didn’t see this post (Red series dimmer update) until later and as I read it, the words looked like English, but I think there was some Sanskrit superimposed and only visible to me because I have no idea how to do that. In short, I was going with what I knew. I could take the time to learn how to do it but I would like to do it now and not in a week or 30. So, any help with the exclusion question? Or, perhaps, a cheat sheet for the secondary controller option?

(While there may be an undertone of snark in the above, please understand that it’s all in good fun. The pump in my washing machine crapped out this morning and the threat of rain killed my outdoor project so I really just wanted this to work.)

BTW, you responded quicker than the washing machine repair company, so thanks for that!

@jwhite175 -No worries. Give me about 15 mins and I’ll take some screenshots for setup as a secondary controller. I know you only have a few left, but more firmware updates will be rolled out in the future so it’ll save you time. Are you running usb stick from laptop?

Thank you. I actually just stumbled my way through adding the stick as a secondary controller. Do I now just go through the OTA update process as before? All of the devices are showing as the same thing. Do I have to cross reference with the hubitat device list? 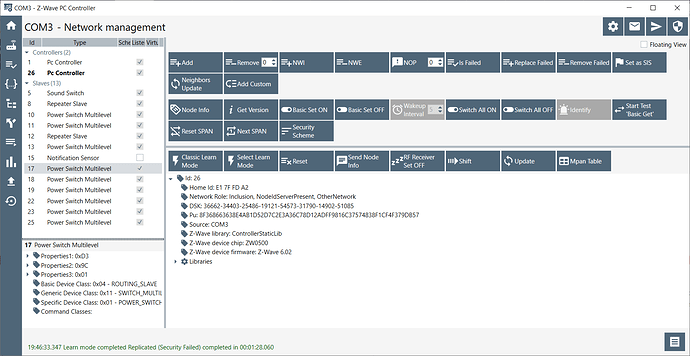 @jwhite175 - Yes, you’ll run it like normal from this laptop for OTA updates. Use this website to correlate between Hubitat hex id to dec: https://kb.iu.edu/d/afdl

I usually pull up the device page on Hubitat and check the chart. 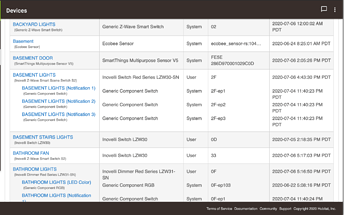 e.g. 2F = device 47 on the PC Controller. I usually stand close with my laptop and go to the OTA upgrade screen. Then click the device I’m choosing to upgrade. Next select “Get” to verify it’s the multilevel switch you’re upgrading (just verify old Firmware present to ensure you’re upgrading the right Red or Black switch). Select the .otz file, select target 0, Update. Then do the same for .bin file and target 1.

That link you sent,is it an even more obscure language than sanskrit?

Nothing is populating in the current firmware section for any of the “power switch multilevel” devices when I click “get.” 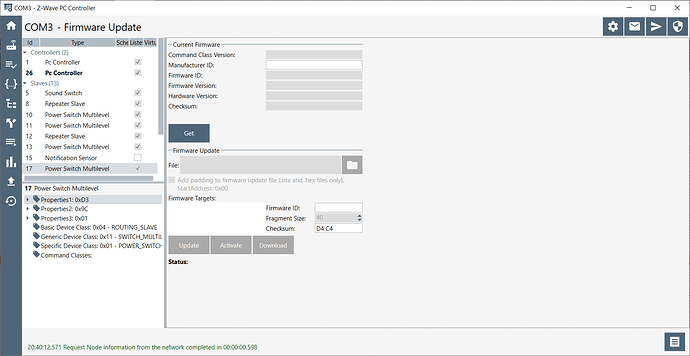 Move closer. It can take several times to “Get”. Just mainly look at the device ID shown in my Hubitat screen capture. It’s in hex then you convert to decimal. Use the first two columns on the website.

Harjms,
I really appreciate your assistance! I moved the stick to within a couple inches of each of the switches but I couldn’t get anything to populate in the current firmware section. I wound up moving my hubitat closer and that did the trick for excluding. All of the switches are now updated and I’m on my way but will get smarter on the secondary controller method for those future updates you mentioned.