LZW36 Gratuitous use of 900MHz Bandwidth 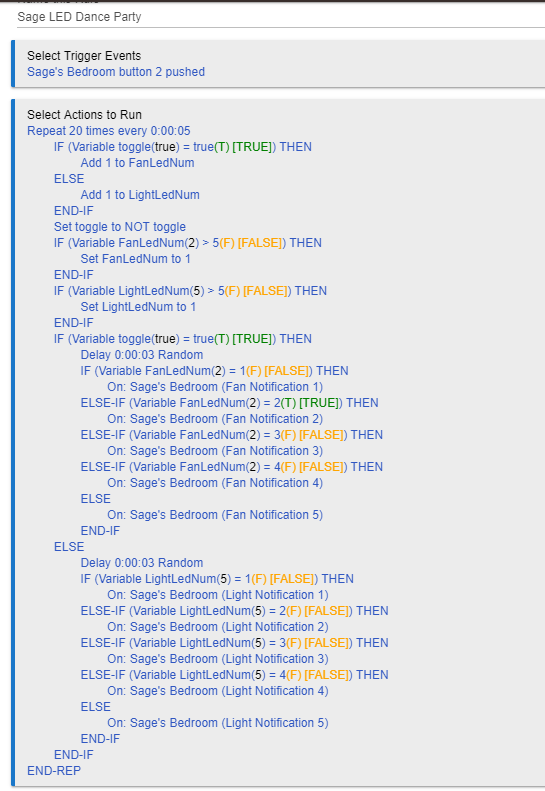 First… my 6 year old daughter was not NEARLY impressed enough. I mean… she was pretty happy… but considering the amount of point-and-click-and-wait in friggin rule machine… yea. If i’m dying for a scripting language to control rule machine, I should probably just learn Groovy I guess?

Second… good stress test of the notification firmware. Well done guys! Thought I found a problem when the 6 year old told me the fan turned off at the end. But then the 8 year old informed me it was because the 3 year old pressed the switch

Anyway… not claiming this is ANYTHING other than a completely dumb use of all 10 notifications. And a waste of an hour I totally didn’t have. But it was fun. haha.

No, what it really means is that Hubitat needs a good way to export/import Rules. Because my daughters would LOVE to see one like that but I do not want to spend the time myself to copy it in.

Problem is I’m not a complete home automation geek (yet). So every time I do it I need to relearn to the little quirks in their “Scripting via GUI” interface. Would be cool if they could somehow import something standard, like Python, or something. I’d even take it in an offline compiler you run on a PC and then upload whatever end format rule machine is looking at under the hood.

What about the lighting effect app?

Probably the reason they don’t import/export easily is all the variable device names, which could be different on every system. So a basic text field would probably cause more hassle than it’s worth.

But, it would probably be a worthwhile invention for the Hubitat developers to create an import routine that singles out all the variable names (with the code in view so you know what’s happening) and make you choose the device that should plug in there.

Or just have it provide errors until you correct them. Even if it just exported it as text and you had to manually correct them before importing… might still be easier. Especially with some of the routines people have already made. It is usually the long, complicated rules that people seem the most amazed by and want to replicate.