Hello, I have my LZW36 wired up and working with the fan. However, tis not showing up in my google home app like the rest of my switches. I downloaded and installed the driver, but I cant seem to get it to work. I contacted Inovelli support and they advised me to post on the forum.

Hubitat doesn’t automatically make new devices available to Google. Could you please check in the Google app (on your Hubitat) and make sure the switch is checked? I believe you will need to allow access to the two child devices (light/fan) instead of the main device to fully control things.

Once checked simply ask Google to “Sync Devices”, which will check for any new devices such as your switch.

There is a community google integration (https://community.hubitat.com/t/alpha-community-maintained-google-home-integration/34957) that does allow controlling more devices. It’s a slightly more advanced setup, but allows you to treat fans as actual fans in google (among other things). The native integration is more limited.

Thanks for the reply. I finally got around to tinkering with the hubitat. I am now able to see the fan and light as separate entities in google home. However they can not be controlled and the fan switch displays as a light bulb and is labeled “Kitchen Fan”. The light is correctly labeled and shows as a light bulb. I don’t know how to enable the child devices in the hubitat settings. Any help would be appreciated. Thanks

@EricM_Inovelli I found the guide you created for smart things HERE but im not sure if I need to do this in hubitat also? Are parts or all of the guide applicable to use with a hubitat?

edit 2
I just tried to turn the light / fan on and off in hubitat and it did not work. I’m guessing child device permissions aren’t working. Anyone know how to enable them?

Did you use the native Google integration or the community integration? The native integration only supports switches, dimmers, thermostats, RGB, RGBW and Color Temperature bulbs.

If you want full support for other types of devices (as far as how Google sees them) you need to use the community integration linked in my previous reply.

Going to second amdbuilder on asking what app you’re using on the Hubitat side.

I haven’t had a solution as far as Google showing the fan as a light, but here’s a brief look at what I’ve got set up between Hubitat and Google Home and I can control it without issues from the app or by voice command (aside from saying lights and having the fan turn on by voice…) -

Apps: (the built in Google Home app for me)

I plan on checking out the community app and seeing if I can get that working instead now, but you should still be able to get them in and working albeit just considering the fans as lights in google home with the native integration.

Edit/Update to say I swapped over to the community app and while it took longer to set up, it’s definitely the way to go.

Thanks for the reply guys. I’m using the default google app. I am working on installing the community app. But when creating the google smart home action part I am stuck. Im trying to give a name for the action on the invocation screen and all the names are taken. Am I missing something here? 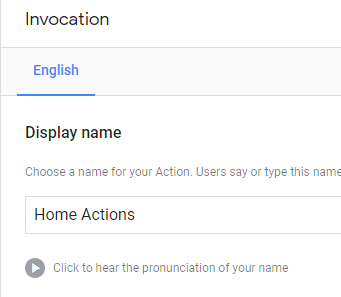 I had tried a few different names (was using the wrong email first), but never had any errors about anything there. I don’t believe you really need anything important there in the name, it’ll just show up in your Google Home integrations instead of the default one (make sure to unlink this and remove it from Hubitat too).