I just plugged in my new Hubitat Hub.
I also installed the LZW36 last week.

I’m attempting to configure the fan button, when pressed on, to set the speed to 50

I’m also attempting to get the fan up/down buttons to set it to a low, medium, high. Currently it’s either high (100) when the button appears to be either on medium or high, and at (0) when set to low.

I was able to change the LED color, and I did press an option in Hubitat to Cycle Speeds and at one point had it set at Auto, which seemed to fluctuate from a high to a low periodically. 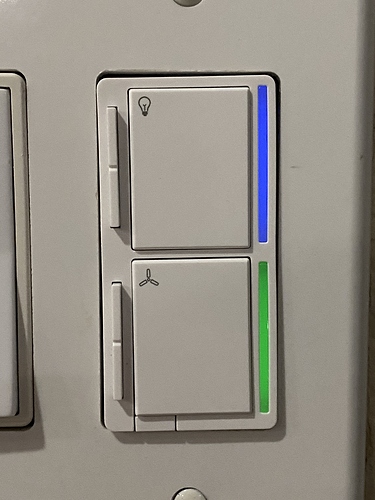 If I use the pull chain a few times while the fan is on it does make it slower and then slower some more, then off.

I believe that the fan speeds equate to High: 100%, Medium 66%, and Low 33%. If you want the fan to come on at medium when you press the button set the following parameter to 66%
Default Level (Local): Default dim level for the switch when pressed locally (at the switch).

How can I set these?

In your above screenshot there is a fan speeds drop down. Set that to high. Using the pull chain make sure the fan is at it’s highest setting. You should now be able to set medium and low from that same drop down. It is important that the chain stays at the highest setting at all times. After you confirm that you can control the speed with the hub, try the small dimmer toggle to see if will control the fan speeds. Just short presses you don’t have to hold it like a light dimmer.

I was headed to bed , and it dawned on me that you may have a DC motor fan. Check the make and model #. A DC motor will want to see 110vac coming in so that it can step it down to the proper DC voltage. It would be like using a dimmer on a television.

I got a new device, and installed it, the new one works as expected.
Thanks all!