Unless I’m missing something it doesn’t seem like the ramp rate of the LZW42 bulbs is a changeable parameter. It seems to take 4-5 seconds to ramp on or off. 2 seconds would be more to my liking. If i’m not crazy(A BIG IF

If so, this is my formal request to get this feature added!

The LZW42 does support ramp rate/transition times, but it is up to your hub or controlling device to specify the transition time when issuing an on or off command.

I do think it would be nice to have a config parameter for the default dimming duration though. It would help in situations where the hub or controlling device does not allow you to specify a duration.

I see what you’re saying. Not really sure how to do that with home assistant. I’ll look into it. That would work for when I’m controlling with scenes/automations or directly from HA app if I can figure out how to do it(OZW beta).

Once the red series switches arrive I intend to associate bulbs to switches though. I’m guessing that wouldn’t work when a physical switch is used since the hub is bypassed.

You may have a couple solutions in HA.

I am not sure if the OZW beta supports transition times, but if so you may be able to turn the lights on/off by specifying the transition time in the data portion: 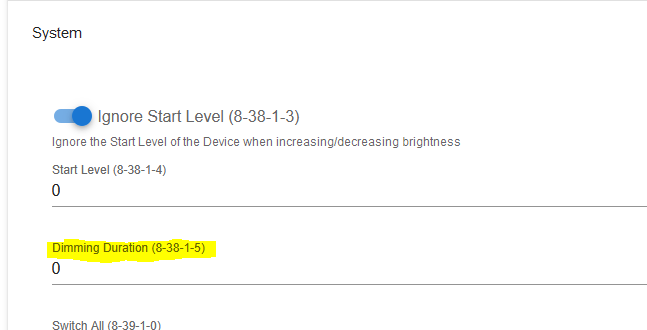 Also, if your goal is to have instant on/off when you get your red switches, you can associate them using group 2 instead of group 3 and you wont have to worry about the transition time.