I just got my LZW45 and I’m quite impressed! It’s a really great LED strip! My only disappointment is that I’ve realized that it wasn’t really possible to control each pixel individually. I assumed that it was going to require quite some code but I was fine with that, but IIUC it just can’t be done.

I was planning to use this as under cabinet lighting in my kitchen, with the section next to my oven turning red when the oven, and the one over the dishwasher turning another color when the dishwasher is done running.

Is it something that will eventually be offered? I don’t mind too much if it’s not user friendly, but it’d be good if this use case was supported. 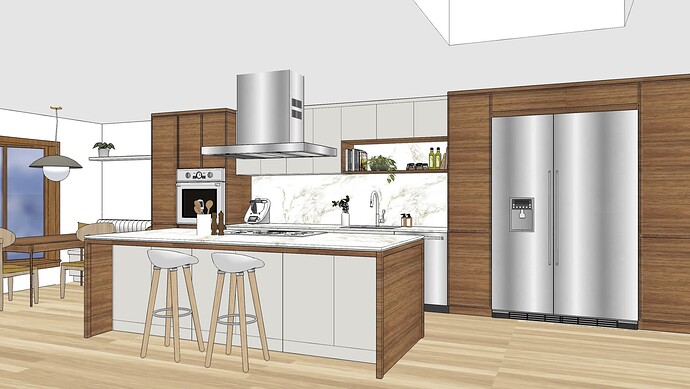 The LED strip will start on the left side, next to the oven and will end on the right side over the dishwasher, it’ll be 9 feet long. I’d like to do a few things with the LED strip:

I could achieve some of my goals without having per-pixel control but that won’t necessarily be ideal as it’ll only work in some situations:

That’s a really specific use case and I don’t expect to have preprogrammed Pixel Effects to handle this.

My question would be how are you handling the oven/dishwasher status? I don’t know too many appliances that have built in radio that could trigger a trap to send over to a hub.

You may have better luck running an arduino or Pi and programming the light strips as you can individually control certain light strips at a pixel level.

I’m getting Wifi connected appliances from Thermador, I can’t start them remotely but I can check the status and use this as a trigger in Home Assistant.

#fancy - that makes sense with WiFi connected appliances. I’m at the basic appliance level, so most I’ve seen were washer/dryers with WiFi connects (well and the Samsung smart fridge with a giant android screen).

With the LZW45 being paused for now, you may want to consider own controller especially if you want it to be “built-in” with the construction and hidden. I’m not sure how quick Inovelli (sic @EricM_Inovelli ) will be able to get the firmware to this level of customizations.

Yeah, I wasn’t sure of how useful having connected appliances would be and so I was happy to think about this kind of light automation.

I got some led strip extension cables (2 x 4’) and I’m planning to hide the controller under the bench on the left side of the kitchen, that will let me swap it relatively easily. I won’t need any of this until October or November, that gives me plenty of time to design a different controller (or to hope to get something from Inovelli

This sounds like a PERFECT situation for WLED and WS2812b or WS2815 led’s. You can set up sections of the led run that do different things for different inputs. It could do exactly as you are looking for.

Ha thanks! That sounds like a great solution! I’d prefer to stick with Inovelli if possible but if not I’ll make a custom driver for this led strip (doesn’t sound too complex to do, there’s many ESP-32 based projects that do this already).

I’m not sure the firmware exposes individual sections or led’s, only effects. If you get this rolling I’m sure you would have a lot of interest from the community though!

WLED looks great! It looks like it can handle segments. Thanks for the pointer.