I added a new circuit to my kitchen for some pendant lights and as soon as I connect the wire to daisy chain the line wires together, the existing dimmer starts buzzing whenever it’s on. Should I create a junction with jumpers to each switch from the line from the electrical panel or is there something wrong with the switch I’ve got?

Both switches paired fine with zwavejs and I can control them both through HomeAssistant and directly at the switches themselves.

Trying to understand a little better. . . .

You added a new circuit and it is wired to a box in which you are placing an Inovelli. And if you limit this to a single Inovelli, it works properly? Is this first Inovelli on a 2-way or multi-way? Is it a switch or dimmer?

So then you need to send the hot downstream. Is this to a 2nd switch in that box or does it leave the box go go elsewhere? If that’s the case, what else is there on this circuit?

What happens if you pigtail a hot bundling the incoming, downstream and pigtail? Does it still buzz?

There was a single gang box that was part of a 3-way circuit. I removed that, installed a 2-gang box, and ran new Romex to new fixtures.

Both the new and previous circuits have Inovelli Red Dimmers. The device that buzzes only buzzes when the second device is installed daisy chained off of the hot.

I haven’t tried pigtailing yet; I figured it would do the same thing unless those two connections are somehow separate inside of the dimmer.

Both devices work properly now as far as controlling their attached loads, one just buzzes.

Pigtailing is electrically the same as using the 2 holes on the Inovelli, but it’s worth a shot as a technique to isolate things.

There isn’t any reason the Inovelli should buzz just because you added another device. Buzzing can sometimes come from a loose connection or improper ground, so double check your connections, yank on the Romex going to the switches, etc?

Out of curiosity, what is the load type and wattage load on each of the dimmers? Are either attached to a motor?

3-way circuit has 6 15W canless LEDs. 3 of the heatsink tabs are broken off. Other circuit doesn’t have any equipment on it yet, just checked functionality with a voltmeter.

I’ll double-check(again) all of the connections and get back to you.

Checked everything and it’s all snug.

The buzzing only happens when the controlled load is on. It stops when the dimmer is off.

By canless, I take you you mean the flush mount/wafer type lights?

Looks like it buzzes regardless of if the other switch is connected. I haven’t tried swapping them. I’ll try that later today.

Ok, that’s what I suspected. So it is not the daisy chaining that is causing the buzzing. My guess is the lights themselves are causing the issue.

The best way to troubleshoot this if swapping in another dimmer doesn’t resolve it is to temporarily remove the lights and wire in an incandescent. What you will need to do is go to the first light’s box and disconnect the switched hot and the neutral. Temporarily wire in a screw in receptacle and test with an incandescent bulb. Something like this, or really anything that you can rig to get a bulb switched (porcelain/plastic fixture, etc). 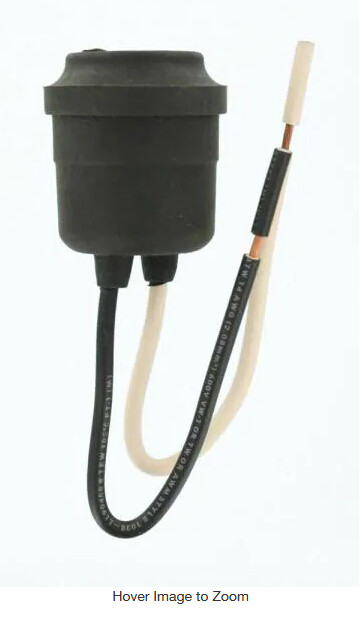 Wafer lights have been known to be problematic with Inovelli dimmers, so this may be your problem. In any event, substituting an incandescent will help quickly isolate the problem. If you swap temporarily for an incandescent and the problem goes away, then it’s the lights. If it still buzzes, then something is up with your wiring.

Couldn’t I just do this at the switch? I don’t know which light is “first.” The electrician ganged them off of the overhead light enclosure. There’s currently no fixture installed there.

You can start there. It cuts out the wiring between the switch and the light, so you’re also removing any wiring faults from the equation. So you’re removing two things at once but it’s worth a shot.

Now to see if I have an incandescent bulb…

It doesn’t buzz with a single incandescent bulb attached directly to the switch. The buzz is barely audible so I’m probably just going to live with it.