Hey All,
I’ve had a NZW30 set up for a bathroom fan for several months now. Just yesterday the fan got stuck on, and now the switch wont respond manually or via Home Assistant. Home Assistant “Test Node” is returning that is is A-OK, but off. Turning it on it switches back to off a second later. I’ve even pulled out the “air fuse” and the fan is STILL on! I’m about to flip the fuse in the basement and pull it out to make sure there aren’t any signs of physical damage / burns, but I’m curious if anyone else has encountered something similar?

Looks like this might be a duplicate post of Switch completely frozen ; although, it looks like most of the people there have red series. The issue I’m having is with the black series on/off.

Welcome to the community! Glad to have you

Reason I’m asking is because Gen 1’s (NZW30) do not have an air-gap on them, whereas the LZW30’s do and you reference pulling the air-gap.

As for your exhaust fan – can you let me know what kind it is (ie: make/model)?

Sorry for the lockup! At least you have a well circulated bathroom

First and formost, a reset at the fuse box reset it, and it is back to being functional!
It is the NZW30. There appears to be an air-gap, or at least there is a thing there that can be pulled out, similar to other models that do have the air-gap. If that’s not what it is, that would explain why it wasn’t working!
The exhaust fan is just what came with the house. I’ll have a look to see if I can get a model number off a sticker when I get back home.

Can you take a picture? Our On/Off switches (Gen 1) did not have an air-gap, but our Dimmers did.

Maybe you got a rare one lol! 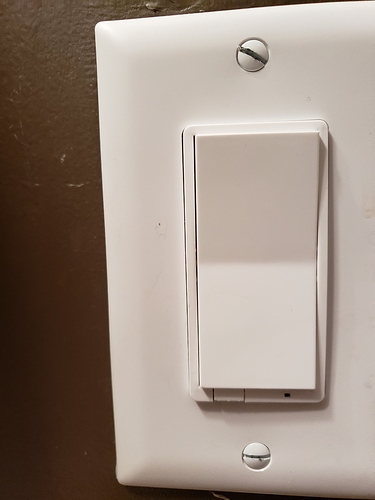 - can you take the face-plate off so I can see the metal part? 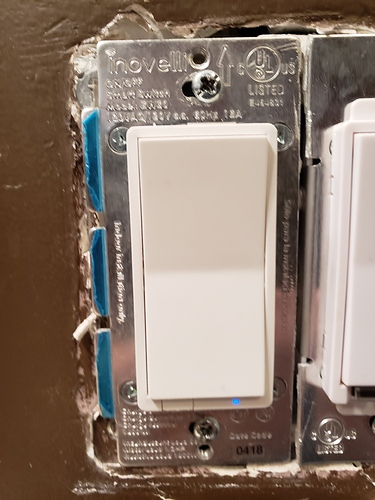 @EricM_Inovelli - check this out! On/Off with an air-gap!

I guess I should’ve answered the original post instead of getting all excited about the air-gap on an on/off lol.

So, the NZW30 isn’t meant to be on an exhaust fan (it can’t handle the Inductive load) so that explains the freezing issue. I honestly can’t explain the reason why the fan was kept on, other than maybe the air-gap is non-functional.

I’ll shoot you a PM shortly.

fan got stuck on

This is a rare issue that I’ve seen on several manufacturer’s relays. With certain types of loads, the relay gets stuck (physically). Sometimes knocking on the switch with some force knocks it loose. The problem is that it will likely come back unless the load type is changed.

Just a heads up, I’m also seeing the same behavior on a NZW31S gen 1 dimmer switch I installed yesterday (yes, I’ve had them sitting in the box for 2 years and just finally installed one yesterday). Twice now the switch has completely stopped responding until I flipped the circuit breaker or pulled the air gap. The first time the light got stuck on, the second time it got stuck off.

In both cases, I noticed it happened after I controlled the switch via Homekit (using Homebridge to interface with SmartThings). Not sure if that had anything to do with it, but if this keeps up, at some point my wife is going to notice and I’m going to get in trouble for installing a smart switch. For now I’ve removed it from Homebridge to see if that makes any difference. The switch is just controlling a standard light fixture with 2 LEDs in it.

I also had this just happen today on a NZW30S switch. It will work for days/weeks and then all of a sudden lock up. Flipping the breaker resets it. I have 2 of these switches on 2 bathroom fans. I wanted the scene control so that I could control some RGBW lights in the bathrooms also.

So if NZW30’s are supported what is?

Also having this issue with my red series switches that I installed this past weekend. I’ve had to pull the air gaps on 3-4 switches already.

Mine can’t be paired i have a lot of trouble putting the switch In pairing mode. after several freezes it came back, the switch buttons do not do the same actions as before. Now when i click A it closes the light and B opens (in reverse). The small light is always on…
On my other one it reversed also but no light…this is certainly a mystery for me. Hubitat can’t find the switch and i deleted everything from SmartThings. I’m running the switch in 3-way with a dumb switch. 1st gen nwz30… please help this is a nightmare product, after working for the last year repairing broke everything!