What I would be interested in is a fan switch (on/off) that has the dimmer-style 7 LED bar. Switch required functions:
Holding the switch up would increase the time the fan would run.
Holding it down would decrease the time would run.
A quick press turns it on at the last “configured” duration or off (if already on).
The 7 LED bar represents the time remaining/configured. If the switch is off, the bar is dimmed but still visible. If switch is on, the amount of time remaining is displayed to the nearest of the 7 possible LEDs. LEDs would represent, in order from top to bottom, ON (no end time), 60 minutes, 45 minutes, 30 minutes, 15 minutes, 10 minutes, and 5 minutes. As the time remain decreases the lit section of LEDs will be reduced. So if you start at 30 min (4 LEDs lit), after 15 minutes it will be reduced to 3 LEDs lit, then 2, then 1, then the will go off (or to dim off state), fan will go off and timer will reset to 30 again.
The switch must be self-contained. All these functions handled internally but CAN be controlled and configured from the HA system (for easy responses to motion or humidity sensors for example).
Capable of powering standard bathroom fans (generally in the 3-5A range).

Additional/Optional features:
“Moving” LEDs where the LEDs have a “motion” leading downwards when fan is on to help illustrate the decreasing nature.
Changing color as time decreases.
Power metering.
Ability to configure the times involved (not necessary, but an added option) but must be able to be reset to factory defaults.
Ability to power more substantial devices such as motors, pumps, or other normal lighting.

Here is a “dumb” version of this fan switch we use in every bathroom of our house. Replacing these with a smart one (so we can integrate it with HA and have better control) is my goal. 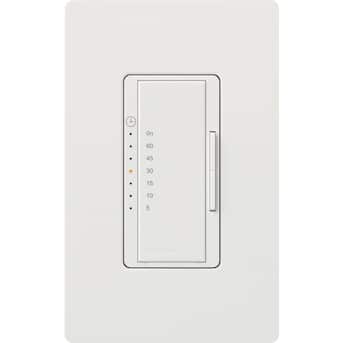 Maestro’s are sweet, aren’t they?

The dimmers are so smooth, too. Inovelli was the first smart dimmer I saw that is even comparable. Too bad (or maybe good, for folks like Inovelli) that Lutron completely botched the marketing for their smart switches. Caséta are ugly as well as a dead-end system with no upgrade path… and Maestro’s are available as part of RadioRA2/RA2-Select systems, but those are (a) out-of-this-world expensive, and (b) sold only through dealer channels.

Maybe something like this, but in Z-wave, will make its way into Inovelli’s roadmap.

Personally I’d love not to have to manually push buttons at all for vent fans. For shower/laundry use, a humidity sensor should be good; I’m just working on what the on-off parameters should be. Floor toilet use, I am hoping somebody will come up with a Z-wave stink sensor!

We have always replaced our bathroom fan switches with some sort of timer model. Originally because my wife would forget them on. Now, everyone is in the habit of using them. But being able to trigger it (or keep it running) due to humidity is one even she wants.

So if it happens… Awesome. If not… We still have the partial method. At least she understands the phrase “nobody MAKES that yet…” and does not expect me to go to extremes to make a workaround.

I have whole house fans in both the house and garage that use timer switches. I would love to get those both set up with inovelli. One fan is on a single speed and the other is on a 2 speed, so it would need to have something a little different as far as a selector for high low or I think they also have 3 speed on some of the other models as well. It is a small but solid market for whole house fans and the right smart switch could dominate it.

I had to replace one of the bathroom fans recently and the new model (Broan ZB110) has a motion sensor to trigger the fan (and possibly light depending on how you wire it, I ran it to the nightlight instead). The thing has a whole bunch of options for how it can be connected.

Anyways, the reason I mention it is due to a problem we found with the Maestro timer switch we had been using for the fan since we moved in. It CANNOT run the fan for this model. Apparently there is a minimum power draw the timer needs to function (0.3a ~36w) but this new fan only uses 11w MAXIMUM (plus being more powerful and quieter than the old one). Benefit of using a DC motor supposedly.

So this leads to an additional request for the “Required features” section of the switch I described, it must have a VERY low minimum threshold, preferably 0.