I’ve been using the Inovelli Red Series dimmers for the last month along with my Zooz switches and Hubitat. I must say I’ve been pretty disappointed with the Inovelli switches. I had high hopes as most people rave about these switches. I do a signal test and I get a green bar which is great, but get awful results with double and triple taps for lights within 20 feet. Below is what I see in Hubitat. I’ll let you guess which switches are the Inovelli switches. I even moved my Hub within 3 feet of one of them and excluded and re-included a device with no change. 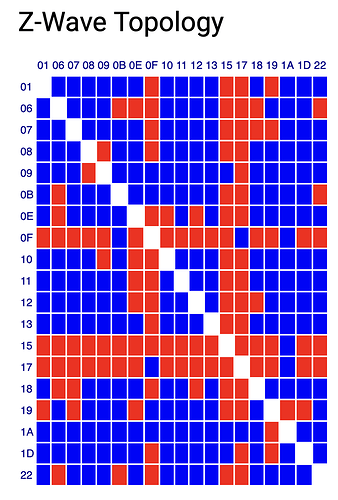 It’s been awhile since I’ve played minesweeper, but I think you got one.

Did you try a zwave repair?

Hey @BrenenP – question for ya – are your switches paired with S2 encryption or are they paired non-securely?

This is one of the only times I’ve heard any issues with signal (not saying it’s not possible) and we’re looking into some S2 discrepancies that have been causing slow scene execution on a separate hub, so I’m just curious.

I, myself, have had issues with slow scenes on the C7. Sometimes it will work properly and quickly, other times some products turn on/off, sometimes they don’t. It’s really strange.

I don’t think it’s a C7 problem per se, I think it’s a mixture of code optimization on our switches as well as some issues with S2 implementation on the C7 (and other 700 Series hubs – we’re hearing reports of issues on the Zooz 700 Series stick and we’re also seeing things with another company we’re working with who has a 700 Series hub).

We will be releasing some beta firmware that should patch this up shortly. We’ve been testing internally and with this other company for a few weeks and have seen very positive results – there’s just one last thing that we’re trying to figure out regarding encrypted packets to/from the switch. We’re 99% sure it’s hub related, but we’d like to figure it out before releasing the official beta firmware.

Yes, all Inovelli switches are S2 and all but one device in my network is S2. Glad to hear I’m not the only one!

I’m not even in this thread, lol.

LOL – Just had you top of mind I guess haha.

I think I saw the capital B and capital letter at the end and just thought of you.

Is there a way to heal the network? I don’t use Hubitat so I don’t get that graph but I do look at a mesh graph that shows the connections between devices. That graph showed a much better mesh after I had all the devices installed and healed the network.

I removed S2 from all my switches. I’m getting quicker automations. The topology view still is all red for the Inovelli switches, but I guess it doesn’t matter if they work.

What’s odd is that I have a switch 2 feet from the Hub and looking at the route it actually jumps to the Inovelli light strips in the basement and then back to the Hub rather than going straight to the Hub.

it actually jumps to the Inovelli light strips in the basement and then back to the Hub rather than going straight to the Hub.

If you do a network repair, it may straighten some of those weird hops out. It’s generally recommended to do a repair every time you add a new device. It’s not a perfect thing; I still get weird routing in some cases after a repair.

I’ve been doing a reboot and then repair for each device added. The reboot step is usually needed since the repair likes to hang on initializing if a reboot is not done. I guess the important thing is everything works better now it is just the OCD in me with the red boxes

Are any of the switches in a multi-gang box?

I was updating FW a month or so ago and noticed the middle of a 3-gang was very slow in numerous 3-gang boxes. I meant to do some air gap trouble shooting, but haven’t got around to it yet since my home is under renovation and I’m not exactly living there currently.

Interesting thing happened…About 2 weeks ago after I started this thread I turned off S2 and redid all the devices. No change. Last night, I updated the firmware on my Inovelli switches to the latest beta version. What happened makes absolutely no sense, but now the Inovelli devices have a lot more neighbors! Guess they moved out of the country and into the burbs.