Problem with scenes in Hubitat for Red Series Dimmer

I have the following rule in RM on my HE. Basically, I am trying to toggle power on a Hampton Bay Zigbee controller Light by tapping twice up and toggle the power to the fan by tapping twice down.

If I turn on the light first, by tapping up 2x, I am never able to turn on the fan as now both last events in the logic are true. The rule processes the first condition, seeing that its state is true, toggles the light power and exits the logic. See the screen capture below:

I am thinking this may be a driver and not a hub issue as I have duplicated the rule using another (brand) switch and it does work. Below, are the last event statuses for a double tap on 1 (up).

And here is the result of double-tapping button 2 (down). Note that the statuses are updating correctly.

I can pull logs if you need them. I was hoping this would be more simplerererer

Edit: I have created separate rules for turning the fan light on/off and another for controlling the fan. This approach is working. So I have a workaround until the issue can be resolved. But I would really like to get all the scenes set up for the switch in one rule.

Hey @Ma2J, I see the problem you are having. I see why it works with one device and not the other. You are checking the “doubleTapped” event twice in the second example, but with the Inovelli you are checking two different type of events 2x tap up & 2x tap down.

I’m wondering if there is a reason you are setting up the rule that way. What I do is use Rule Machine’s button device integration (it used to be it’s own app called Button Controller, but has been integrated into Rule Machine now). You setup different actions based on the different button presses: 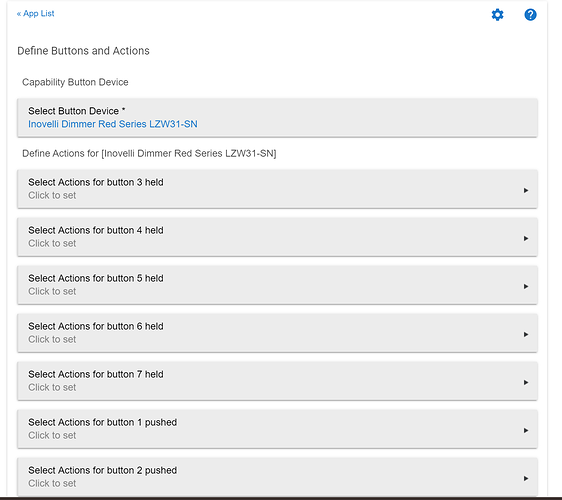 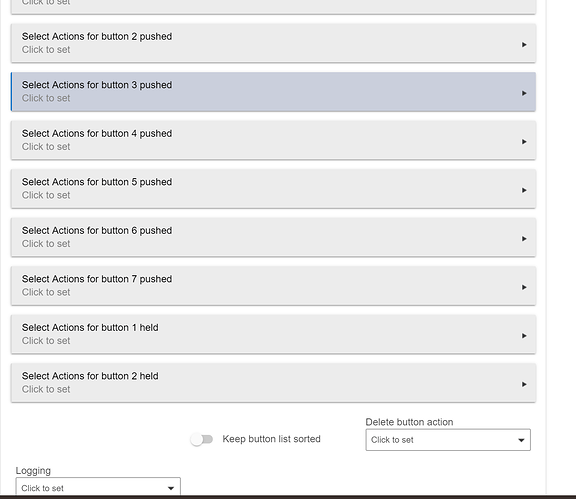 As noted above, this is an issue with the way you have the rule set up. Using a “Button Device” rather than “Button” trigger in RM would be an easy workaround (and I think gets you a much better UI for this; as stated, doing this gets you basically what used to be the standalone Button Controller app).

But in case you’re wondering why what you have doesn’t work, what you’re checking for in your “Actions” section with the conditionals (IFs) aren’t events. They are conditions that check for the value of (in your case) the pushed and held attributes on the device, which are designed to remember the last button number that created one of those events. They never get “cleared,” only changed if another button number generates one of those events (and button events of other types—push, hold, release—don’t affect attributes associated with another button event type). If you want to use a “Button” trigger instead of “Button Device” (again probably not what I’d do), the solution is to move them into separate triggers and separate rules instead of jamming them into one with the conditional, which will never be able to check the current type of event in the way that you’re looking to do here.

This isn’t specific to the Inovelli switches/dimmers; this is how the button-related capabilities (and their attributes, specifically—which is what you’re checking here with the IFs) work on Hubitat.

People used to run into similar issues on older versions of Rule Machine when they tried to check for a lock code user as a condition rather than using it as a trigger (this is a bit more difficult now since Rule 4.0 did away with “classic” conditions, but I suppose it could still happen if someone put two locks in one trigger and tried to use an IF in the Actions section to do something different for a particular user on each). The Rule Machine subforum on the Hubitat Community is a great place to get more help if needed, but luckily Eric is quite versed as well.

Hey @Ma2J, I see the problem you are having. I see why it works with one device and not the other. You are checking the “doubleTapped”

@EricM_Inovelli & @BertABCD1234 I was aware that the original Button Controller app was going to be depreciated in HE and that the functionality was added to RM4. Thanks for mentioning “Button Device”. Strange that I do not see this when editing or modifying an existing rule. All I see is “Button”. I only see “Button Device” when creating a new rule in RM… I’ll take that issue up elsewhere. Anyway, now that I am aware of the “Button Device” in RM4, I’ll be using that as it looks way easier than what I was trying to do. Thanks again

EricM, at some point, do you plan to update the driver so that the debug messages are optional and the reported dimmer levels %, power data etc. are Info (optional as well), like you did for the On/Off switches.

Again, Thanks for the help guys!

EricM, at some point, do you plan to update the driver so that the debug messages are optional and the reported dimmer levels %, power data etc. are Info (optional as well), like you did for the On/Off switches.