I have grand RGBW scene visions now that we have these amazing Red Series switches… at least I hope the switches are as awesome as they seem. I’m still waiting for the next shipment to replace all of my old non zwave plus leviton zwave switches.

I odered one LZW42 to test out… I put it in my office desk lamp and I love it, so I ordered 6 more to replace all of the bulbs in the lamps where I’m currently using old/basic leviton lamp dimming modules. I put in RGBW strips under my desk that are also ran along the backsides of the arms of my triple monitor stand. I have grand visions of RGBW strips under the master bed, under the sofa in the living room, under kitchen cabinets… etc… ya’ll get the idea…

What doesn’t seem to exist as far as I can tell is a zwave RGBW can light setup. I have 6x 4" LED can lights in my kitchen. There are individual zigbee or wifi can light replacements that I could use, but I can imagine the issues with dealing with 6 separate “bulbs” at a time and timing and stuff now working out well.

I do integration for a living and we recently started using a company called Loxone that has recently come to the US but has been around in Europe for a while. I’m doing a new beach house that has Loxone RBGW can lights and RGBW strips all over. It’s been coming together amazingly and giving me great ideas to use in my home. Loxone is expensive proprietary stuff, but much of what their system can do lighting wise can be done using a good hub and zwave components if they exist.

Now onto my idea… What I have in mind is replacement RGBW can light inserts that can be chained together and then ran from a central zwave controller module similarly to the way I can chain RGBW strips now. All easily controlled by a red series dimmer using zwave association and with the relay disabled in the dimmer. Typically it’s easy to retrofit wire between can lights in a given zone so maybe something similar to the RF module that comes with the fan/light switch where we could intercept the mains power going to the first can light, insert the RGBW zwave controller and then retrofit 18/6 or 16/6 wire between the cans to chain the individual RGBW can lights together.

We also do zwave stuff at work. We usually use GE switches and smart things because it’s easy and almost dummy proof(personally I use home assistant). My house is going to be the test dummy to see if we can start using these red series switches in place of the GE’s.

Along these lines, if you could make RGB ultra thin recessed lighting, it would be amazing. So this style 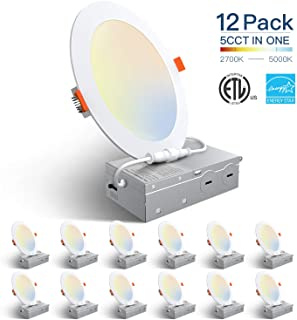 but RGB and z-wave. You would even have the whole box to put the controller in.

Yeah, I love this idea – our manufacture is actually one of the leading LED manufacturers out there so this shouldn’t be too hard. Just need some capital to make this happen

Man, I just bought these and if you made them instead, I would swap them out!

I ordered a gateway from a guy in Austria that will enable use in Hubitat.

No cans needed for install, only a hole in the ceiling!

Thinking about this a little more, one item that might help keep the cost down on these would be to have one controller box, that powers multiple lights. Maybe somewhere in the 2-4 range? Maybe selling the controller with a single light, but then you can buy additional lights to attach to the controller?

Of course I don’t know how the costs work, so maybe it wouldn’t help in then end.

I’ve wanted to do this and I’ve looked into a ton of options. Gledopto almost got my money with their zigbee downlight, but they aren’t IC rated and I don’t want to burn my house down. The only other options I’ve found are WiFi and $100+ per light.

Along these lines, if you could make RGB ultra thin recessed lighting, it would be amazing. So this style

but RGB and z-wave. You would even have the whole box to put the controller in.

Yep, looks about right. One box (AC/DC converter/RGBW zwave controller) and a daisy chain of recessed lights! There are non zwave options out there if you don’t mind controlling the lights individually. Having them all controlled from one controller is what I’m looking for. I have multiple LZW42 bulbs in a room and even in groups they don’t all change simultaneously. It doesn’t really bother me for those though. Having the 6 can lights in my kitchen turn on/off or change colors one by one every time the wall switch is pressed I wouldn’t like and I know my SO would complain. One controller with multiple lights would solve that.

It looks like those are made to snap into the holes on their own with no “can”. I guess I could rip the cans out if needed. Whatever method would make them usable for the most people would be fine with me. I’m not scared of a little drywall work.

Hi,
I like your idea but I don’t think it will work at least I don’t understand how without having processor and z-wave in each light or additional wiring to interlink these together?

Im down for an R30 style bulb. Honestly this is probably the easiest path to victory since there’s already an A15 bulb in the lineup, and you wouldn’t have to worry about what size holes are cut.

So long as the red series could control them via association (hopefully we can add 5 bulbs to one dimmer) I’d be super pleased.

Running a wire between cans is not feasible.
Sometimes wires are routed through joists and in ceilings with no access above or below.

Just use a hub like Hubitat. Run any zig bee/zwave light you like. Time of day scene controls are where it’s at anyway.

Time of day scene controls are where it’s at anyway.

Love this idea, in for plenty if they make it into production. Puck or recessed can style wouldn’t matter to me, but quality must be equal to LZW42’s performance. DIM dims and BRIGHT white/colors.

Something I’m interested in also. I already have Can Lights, and having something like BR30 would be nice, but even better would be a retrofit kit like the below. I’ve found proprietary and Zigbee RGBW ones but having something Zwave paired with the Red Series switches would be perfect.

I wanted to give a quick update on our roadmap. We’ve grown a lot over the past couple of years and are entering into a new and exciting phase both with our own company, but with the industry as a whole. We started off with some huge ambitions to create an entire ecosystem of products under the principle of, “if you want to do something right, you have to do it yourself”, which sounded like a great idea, but in the end, it spread us very thin from a resources and branding standpoint that we ulti…