Pulling out hair over 3 way no neutral install

I’ve done about all the research I can and still can’t figure out how to install the new red series dimmer in my no neutral 3 way situation with aux. Inovelli diagrams don’t apply and I haven’t seen a thread on here with the exact same set up. I am even considering converting the 3 way to single pole just for the sake of less complexity. Can anybody confirm that’s not a bad idea?

Obviously, 3 way would be preferable. I think the most accurate diagram of my wiring would be this. The only differences being I dont have grounds and my switches are in 3 and 2 gang boxes (not singles). This is what everything looks like. Line comes into light fixture. There’s 2 romex (4 wires total) in there. 1 from each romex is twisted together and the other two go to the light. Each switch has 3 wires. Unfortunately, the wiring is quite old and the colors of the insulation have worn away, but I’ve tested the continuity of the switch wires and identified the 2 travellers. I have also identified the always hot for switch “a”. Do I need to test continuity of the fixture wires? I know which is the hot.

I feel like if I could just get some advice from some people that know a lot more than me, I could successfully get this thing installed. I want to be 100% sure where each wire goes before install everything. hope I provided enough info. Fellas, I don’t have much hair left. This dimmer is killing me, ha

@uncleparm - If you’ve found “always” hot, then the Inovelli will need to be installed ‘here’. I don’t think the Aux switch will work as it requires a neutral (GE 12723). Half the battle is finding the hot and travelers. It sounds like you found everything needed. Just keep the toggle switch installed in the ‘B’ location. The common from the ‘B’ location will go to the light. The load and traveler on the Inovelli switch doesn’t matter. Be sure to correctly setup parameter 21 and 22.

Ok now I’m really confused because Inovelli’s wiring guide has an aux in a no neutral 3 way situation. Or is there something else I’m not taking into account here?

@uncleparm - Agree, however I refer to the manufacturer of the Aux switch over Inovelli. It may work. I’m using the aux switches, but I have neutrals. I’d have to refer to @anon64478871 or @Eric_Inovelli for confirmation of aux switches without neutrals.

@harjms thanks for the clarification, buddy. @anon64478871 don’t you think it’s a little uncouth to specifically mention GE aux switches in a no neutral 3 way in your official wiring guide when you haven’t tested them yet? I bought the GE because I read about it in your guide.

Its difficult to determine much about the wiring from the photos. But perhaps this will help.

Not it is not exactly the same as the dimmer box has a neutral, but because this wiring example doesn’t use the neutral it might be what you are looking at.
Ignore the 2nd aux they are simply wired in parallel. 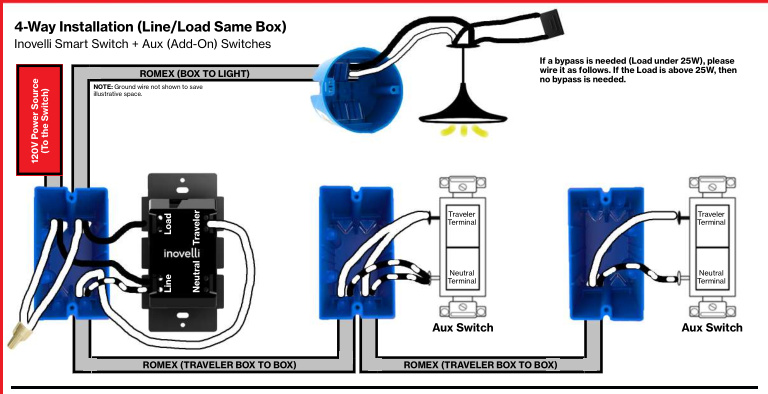 If the diagram you posted is accurate, then the diagram posted by @jtronicus was reported to have worked. Post 13.

@Rob79
it worked perfectly once I finished wiring i changed option x12 and x13 on config switch so it was set to no neutral and aux switch and everything works perfectly.

@Bry Oh my god. Finally…a breakthrough! Wahoo. Now we’re talking. I am going to try this right when I get home. Thank you very very much. Really appreciate it

@uncleparm - to be clear, we at Inovelli have tested out using the GE and HomeSeer aux switches in a no neutral 3 way set up. @anon64478871 was referencing himself personally when he said he hadn’t tested it yet.

@Courtney_Inovelli - Just to be clear, is that non-neutral Inovelli setup with a non-neutral connected Aux switch from both GE and Homeseer?

I can’t get that same set up to work correctly. Mine will only sometimes turn off from the aux. I have a red dimmer with no neutral to get aux

@Courtney_Inovelli - Just to be clear, is that non-neutral Inovelli setup with a non-neutral connected Aux switch from both GE and Homeseer?

GE Aux also confirmed to be working in my house with non-neutral setup. As shown in the diagram by JohnRob the “neutral” terminal receives a Line wire.

@uncleparm I have the same wiring layout your first linked diagram shows. If you are still having issues, I can sketch out what mine currently looks like as installed. Given you have that old style wiring, I would kill the power at the breaker, get a long line of speaker wire, set a multimeter to “continuity” mode (I think that’s what it’s called) and make sure you know exactly which wire is which. I’d mark out the wires on both sides with colored electrical tape so you don’t accidentally swap a wire to the wrong position.

On my second level, all line wires come in through the ceiling, so it’s an ordeal to identify which of the 4 sets of wires entering the light’s box go where.

I would think the below would be the setup for you

That diagram depicts a line and neutral in the box on the left. If the OPs diagram is correct for his situation, he doesn’t have neutral, as the path back to neutral is passed back through the light. He needs to follow a non-neutral configuration, which isn’t what that diagram depicts.

Perhaps this is close to your situation…

No Neutral, using a Aux Switch.

Remember you must set: 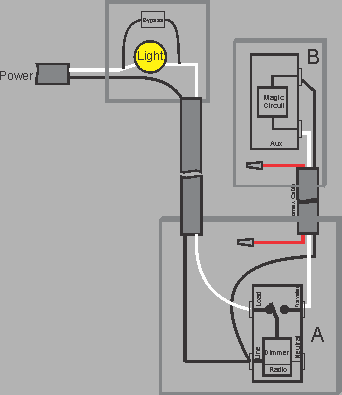 The DIY Smart Home Guy created diagrams for 9 different 3 way methods (specific diagrams for the Inovelli switches). I found these diagrams to be pretty easy to follow for my 3 way no-neutral set up.

I just looked through each of the method diagrams in Step 1 and confirmed that my wiring matched method-5. From there, I opened Solution D-5 and followed the instructions. Pretty simple, just ran into the the problems others reported with toggle up not working properly from the aux switch but setting/resetting parameter 21 and 22 eventually fixed that. Been running for a few weeks now without any issue. Only thing I’m waiting on now is scene support at the aux switch (single, double, triple tap, etc).