I’m guessing I’m going to need to do this through Wink Robots since the “Generiz Z-Wave switch” gets registered as it’s own device and doesn’t have direct control over another device (would be nice if Wink registered it as a SWITCH that could directly control LIGHTS, but that’s just silly). So I’ll have to setup a Robot for ON and OFF in the form of:

Sound right so far? So if the Red Series Dimmer Switch is not controlling the lights via internal load (internal relay disabled) how do I dim my lights? Also from the looks of it Scene control is not currently compatible with Wink 2.0?

Thanks in advanced for the help

I’m guessing I’m going to need to do this through Wink Robots since the “Generiz Z-Wave switch” gets registered as it’s own device and doesn’t have direct control over another device (would be nice if Wink registered it as a SWITCH that could directly control LIGHTS, but that’s just silly). So I’ll have to setup a Robot for ON and OFF in the form of:

Yeah this is exactly right

So if the Red Series Dimmer Switch is not controlling the lights via internal load (internal relay disabled) how do I dim my lights?

This is the tricky part since you’re using Wink, which is kind of limited in what it can do

I wish I could help further as I used to know Wink like the back of my hand, but I switched over a couple years ago and forgot my Wink password. I tried to do the password reset and it never worked and then tried calling a few weeks ago and their support was down. So, I can’t get into my app to play with it.

Also from the looks of it Scene control is not currently compatible with Wink 2.0?

I don’t know if this is going to work for you. I’m my experience, when you disable to the internal relay, the switch just stays in On mode all the time (the light bar on the side remains lit constantly). Therefore, I think your plan to use the on/off trigger for the robot isn’t going to work since the switch will always be on.

If Wink supported scenes, then you could trigger off of the top button being pressed or bottom button.

I just tested it out and once you disable the relay (in either on or off position), it sticks that way. So your switch is always going to reflect On in Wink and you won’t be able to shut it off or trigger on it turning on or off

Oh just had an idea. When wiring up the switch, you could wire both the line and load wires onto the line connection on the switch. This way it’s always providing power to the bulbs without the help of the dimmer. Then you can leave the relay enabled and then use it to trigger your bulbs. You just have to be careful that pulling the air gap switch that would normally cut power to the bulbs will not work as they will always have power.

Does that make sense?

Well that’s a real bummer, this was the whole reason I bought these switches, and they were advertised as working with Wink. If they support Wink I feel like Inovelli should have a working Wink account to test these sorts of things… @Eric_Inovelli

Anyways, that does make sense and I think that should work. I know which breaker controls those lights so at least I have that. My switches are still in pre shipment (2 days later) so hopefully I can test soon. I’ll let you know what I find. There doesn’t seem to be many posts pertaining to Wink… I’d switch platforms but none of them support all of my current devices.

I just switched from Wink to Hubitat. I’m surprised at the flexibility it gives you to do everything you want to do. It’s true it doesn’t support all the devices that Wink does, but it does give other benefits that Wink couldn’t do like the notifications and scene controls in these switches.

Sorry, I should’ve been more clear – while I personally don’t have access to Wink, Eric M has tested this on his Wink Hub and confirmed that the basic functionality works (ie: it will turn on and off, dim, etc).

We knew going into this that Wink does not support any advanced functions and put this as the disclaimer on the Amazon listing as well as on the main page of our listing:

While any Z-Wave HUB should be compatible, many simply do not support advanced options and are limited in what they can do. For this reason, if you do not see your HUB listed below, please purchase our Basic Switch unless you plan on upgrading your HUB.

If you still would like to purchase this switch and understand the advanced options are not available on the HUB’s below, here are the other HUB’s that are compatible: 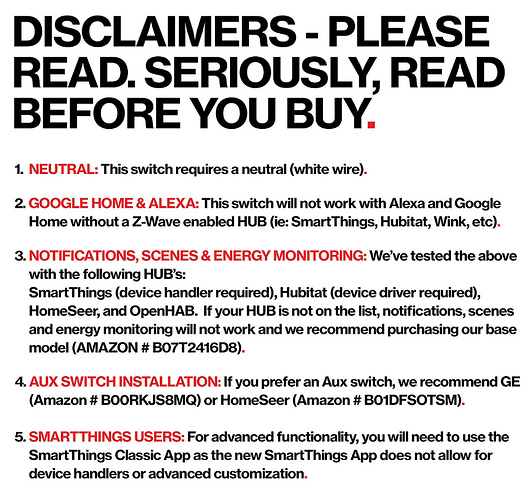 I guess there’s room for improvement in making it more clear and I’m open to suggestions. I’m not trying to be rude, just really trying to understand how to be more clear about these things.

@Codeman71 Does it have a polished phone app and does it support Amazon Alexa?

@Eric_Inovelli I’ve read the disclaimers and I’m good with them, so long as the switch does what is advertised. You agreed that I would need robots and disabling the internal relay should work, but @Codeman71 is saying it won’t. You just posted that dimming was confirmed working, but is that only when the switch is controlling a dumb bulb or also when it’s controlling a smart light? And what is “etc”? I thought on/off and dimming were the only things that worked with Wink… Thanks Eric

There is an app, but it is not polished for sure. It takes quite a bit more time to get things set up, and a lot of that is due to its flexibility. It does support Amazon Alexa and Google Assistant. What I recommended to my wife was to use the Google Home app to control the lights if she needed remote control. It works nearly as fast as the Hubitat app and it keeps things organized quite well as long as you assign your lights to rooms. I actually prefer that app to the Wink app in that regard.

And as far as the dimming concern you have, no I’m pretty sure you won’t be able to control dimming of smart bulbs with Wink. If they were dumb bulbs you’d be set.

@Eric_Inovelli
Got my switches and I’m using them in non-neutral config. I tried wiring the LINE and LOAD wires to LINE side of switch but then the switch doesn’t power on (even with using Bypass Resistor across LINE and LOAD of switch). When I wire my smart lights to the LOAD side of the switch and use a Bypass Resistor inline with one of my smart bulbs, the switch works. If I turn off the internal relay, the switch doesn’t do anything (no change of state in Wink) and when I toggle the light in Wink it turns off the LOAD at the switch (no power to smart lights). All I want is my Inovelli switch to turn two smart lights on and off, don’t even care about dimming! Any more ideas?