This weekend I was able to get my soffit light wiring completed. I have 14 soffit lights (8.6watts ea.) tied together and landed on a three way circuit with a dummy switch and a red series gen II. The switch produces quite a bit of a hum/buzz noise. From reading on this in indicates either a bad switch and or overloaded switch. Both of which I believe is not the case. I have switched out the switch with another and also the calculation of 8.6 x 14 = 120.4w

Does anyone have any other ideas for me to look at 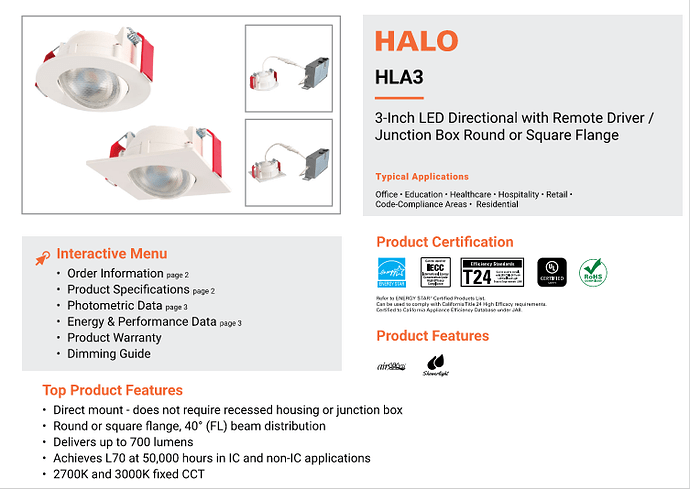 The switch is humming or the bulbs?

If switch, then you might pull it and test it with a 60W bulb and see if it still hums when dimming.

Usually it’s due to leading edge vs trailing edge, but it does say this:

I have switched out the switch with another

Did you switch it out with another Red series or just something else for the interim? If it was another red series, what was the result. Did it hum as well?

It is the switch that is humming, I did put another red series in location and it hummed them same tune…

Switch or Dimmer? Is the load in the same box and the Inovelli or in the dumb switch box?

it is the red dimmer, the hot is in the box of the red dimmer and the load is comes across on the traveler for the dummy 3 way switch (non dimmer)

Ok thanks. Normally when lights buzz it is because they are incompatible with the dimmer. But when the dimmer buzzes, it usually indicates a wiring fault of some sort. Plus, the specs for your lights state they are compatible with both leading and trailing edge dimmers, so I’m leaning toward a problem on the dimmer side.

Then I would check for loose connections at the dumb switch.

Does the three-way function normally with the dimmer installed? In other words, do the lights turn on and off properly at both switches?

I would also try rewiring this as a 2-way. Trying for process of elimination. Since your load is in the far box, you’ll have to do the following:

I appreciate the suggestions above and will try this next weekend when I return.

To summarize what you are suggesting is basically taking the three way switch out of the loop and just connecting the load back to the red dimmer, and lifting the red traveler at the red dimmer, reprogram as 2way correct? Also that being said I am supposed to keep the neutral hooked up at the red dimmer as well…

I am using hubitat

Yes, you have that correct. I am just in essence trying to simplify the wiring as some sort of wiring fault is indicated. You would still keep the neutral attached to the dimmer as the dimmer needs to remain powered.

would or could the overall distance in the cable create any such issues? The total length of cable has to be somewhere in the 250ft to 300ft length overall by time I go up and down the gables around the entire house and back in to the three way box and over to the red dimmer box.

Long runs can have a voltage drop that can affect things, but I don’t think that’s an issue here.

Using Southwire’s calculator, 300 ft of #14 wire assuming a load of 2 amps (which is probably high) gives you a 2.68V drop, under the goal of < 3V. If you drop down to 1 amp, which is probably closer, then halve that.

Additionally, you should still have full voltage at the box where the Inovelli is powered, so the switch should be fully powered. Now whether or not a distant voltage drop to the load (still within parameters) can have an effect on the powering dimmer, I have no idea.

So try that 2 way conversion I suggested and see what happens. If you still get the buzzing, try swapping in an incandescent at the dumb box. Pick up a socket like the below and temporarily wire it in at the dumb switch box. This will eliminate the lights, so see what that does. 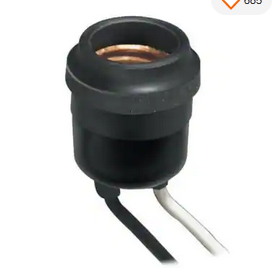 so eliminated the 3 way dum switch, reprogrammed the red switch and the buzz went away. Put it all back as original install and the buzz was loud again, hear it while standing away from the switch. so for grins i swap the red with another red, programmed the new one and the buzz was very faint this time. diming lower and higher did not effect the buzz… currently i cant hear the buzz because its so faint unless i put my ear up to the switch. not sure what gives…

Ok, so with the 3-way put back, try the incandescent swap-out. If the buzzing remains, that seems to indicate an issue with your wiring.

Is your assumption the wiring has issue on the 3 conductor wire that ties the two switches together is that what you a pin pointing towards? which is only about a 30ft run.

I am pretty sure my wiring concept is 100% (correct me if I am wrong), the only thought is that the 3 conductor wire has some sort of damage, it is brand new, with a very low possibility that a staple could have caused some damage

Is your assumption the wiring has issue on the 3 conductor wire that ties the two switches together is that what you a pin pointing towards?

Your wiring description seems correct to me. At this point, we’re chasing gremlins, but here are a couple things to try.

1 - Test the 3-wire. Remove all four conductors from the switches and bundles so that you just have 4 loose conductors in each box.

1a - Using a meter, go to one end and test for continuity among all of the conductors, including the bare ground. There should not be any. Any continuity between any of the four indicates a fault.

2 - Swap out the dumb switch. Odds are pretty low here but who knows . .

3 - In the back of my mind, that long run keeps making me wonder, although I can’t point to anything that should cause the issue. There isn’t a line in the dumb switch box by chance, is there? I’m wondering what would happen if you located the Inovelli in the other box, still keeping it as a 3-way. You can’t do that without a line there, though. (And you’ve already proven that a 2-way works.)

4 - Do you have an Aux? You could try an Aux in place of the dumb switch. I can’t say why an Aux would work any better, but it’s worth a shot.

At this point I’m just throwing out anything I can think of . . .

EDIT: That dumb switch isn’t lighted, is it? I would have thought I would have asked, but I read back and couldn’t find it.