No worries, thanks for following up!

A request for the next bulb firmware- can we get adjustable ramp time? Right now the ramp time is really slow…

i placed an order for 20 more bringing my total to about 37 lol , i Too am hoping for better stability and some effects in the future … i got the basics of rule machine down but for ( complex effects) I still need more practice

Just thought of another feature- disable repeater. If the smart bulb will be in a switched socket, IE if it’s on the same circuit as some dumb bulbs, then acting as a repeater is undesirable because the network will try to route through it and then it will disappear leaving broken routes.

So there should be a config option for like ‘switched bulb mode’- when enabled it reports itself as a non-repeating node (like a battery powered device). That will I think need an exclude/include to take effect…

Since this thread got revived, it reminded me of a feature I was thinking about: controllable security while pairing. The bulb only supports S0, which is less efficient and less secure than S2 (and still less efficient/more chatty than non-secure pairing regardless), and while some hubs/controllers allow you to choose whether to pair securely (and the bulb will agree), it looks like new 700-series S2 controllers won’t allow you do that. Hubitat is the first I know of to market, but they’re saying it’s all the kit lets you do, so it will likely affect all certified Z-Wave implementations at some point.

How lots of other devices handle this: separate ways to get to inclusion mode for secure vs. non-secure pairing (on lots of sensors or switches, it may be holding a button instead of pressing it, or pressing it so many times instead of so many [other] times; I realize this is a bit more challenging for a light bulb, but maybe so many power cycles for secure vs. non-secure?). Or just use S2 (which I’d gladly use over S0 and would consider using even if non-secure pairing were also available), but I assume that would require a hardware upgrade, while this other idea might be do-able with firmware tweaks.

I definitely have a RGBW bulb included to a C7 hub as S2. It erks me because I still need to get the ladder out to exclude/reinclude as S0 so my association works.

Weird, I can’t remember if I’ve tried on my C-7, but I was going by a report consistent with my assumption from a Hubitat user and the fact that the Z-Wave conformance doc lists only S0 and not S2. If it’s indeed already S2, then that’s great (and nevermind my “request”).

@BertABCD1234 - it only happened on 1 bulb out of 5. I thought it was weird, but that’s why my association wasn’t working all the way. Always happens in the tall overhead light. Never the floor lamp.

The bulb only supports S0

I thought the bulbs did support S2? At least they are documented as supporting it here: https://support.inovelli.com/portal/en/kb/articles/products-leds-rgbw-a19-lzw42-spec-sheet

@Eric_Inovelli I think an update may be needed here

Z-Wave Alliance confirms it does not. 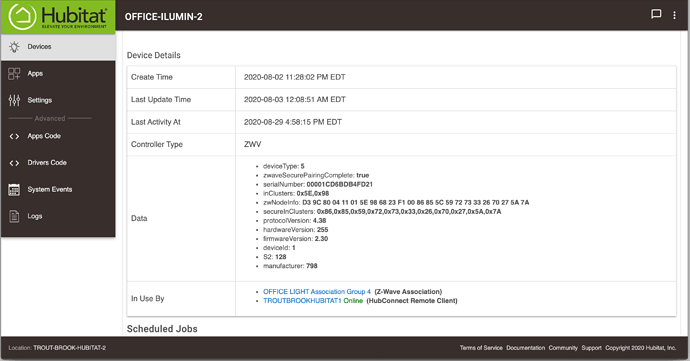 Maybe @bcopeland can give some insight? He has the bulbs too.

“S2: 128” in Device Details is S0. The Settings > Z-Wave Details screen should also show the highest grant (S0 or some level of S2) that was chosen during pairing, though if you didn’t see the prompt at all, then it was either S0 or nothing.

@BertABCD1234 - Strange because none of the other ones indicate as such. So, why doesn’t this one work in the association? Also I thought “ * zwaveSecurePairingComplete: true“ meant secured pairing, no? (Might be dumb questions but outside of communication cryptography, I don’t know much)

Z-Wave details does indicate as S0. So clearly I don’t understand the basic concept of S0, S2, or None for security.

There’s probably a lot I don’t understand, either.

But I do know there is no security, S0, and various levels of S2 (unauthenticated, authenticated, and access control; the latter doesn’t require user input of a code, the latter two do, and the last is intended for things like door locks and garage door openers … if someone could clear up the “AES-128 Security S0” vs “Z-Wave Network Security” thing on the conformance docs, I’d love to hear it – is there an older/less secure S0 too?).

“S2: 128” in Hubitat actually means S0, while other numbers are I think a bitmask representing whatever combination of S2 grants you gave (generally you’d choose both the highest and everything below it, though you don’t necessarily need to — though for association, as long as your two devices have at least one grant that matches, you should be good; I have not tried this so, this is me regurgitating what I’ve heard theoretically). The “Z-Wave Details” screen is easier to understand here since it tells you the highest grant.

Hi all, I was just wondering: any plans to make a new version of the LZW42 RGBW bulbs that supports S2 security? Is this the kind of thing that can be added with a firmware update?

The Inovelli Red Series switches and dimmers support S2, but the LZW42’s only support S0 or non-secure. This is a problem because as confirmed by @EricM_Inovelli a couple times, Z-Wave association does not work unless both devices use the same security class. This means I cannot convert some of my dimmers over to S2 without losing the bulb associations.

Thanks for everything you do!

Hi all, I was just wondering: any plans to make a new version of the LZW42 RGBW bulbs that supports S2 security? Is this the kind of thing that can be added with a firmware update?

Great question – unfortunately, we looked into this during our last round of firmware updates and we were told that there isn’t enough room on the chip to add it.

Hey great question and we just talked about this last night with @JasonL_Inovelli. Basically, it’s going to boil down to whether or not we have enough space on the bulb to add an option for no security. We’ve confirmed it isn’t possible to make an S2 version of the bulb due to the millions of color combinations and extra room S2 takes up. So, the options are: Bulb = Two inclusion methods: S0, & No Security Switch = Three inclusion methods: S2, S0, & No Security My homework is to figure out …

Yes, it’s been a headache lol. This is why in 2.31, we added the ability to join the bulb non-securely vs in S0 mode as ST only allowed either S2 or non-secure.

I wish I had better news and please know we tried to get S2 on the bulbs, but ran into a memory issue. The other avenue we tried (and failed) was to get the bulbs in 700 Series, but the issue we ran into there is that the manufacturer was being told by Silicon Labs that they needed to buy 1M 700 Series chips (these are special to bulbs and not the same as what’s found in every other product – something about heat dissipation and California Title 24). We sell maybe 20-30k of these bulbs a year, so we’re far from 1 million

As a side note, I’ve switched over to everything non-secure and it’s lightning fast. I realize it can be a risk from a security side, but I don’t anticipate anyone standing at my front door with a scanner and controlling my bulbs. You never know I guess!

Thanks for the reply! That does sound like quite the pickle.

FYI, I happened to see on the Z-Wave Alliance website that Sengled has a recently certified (in August) Z-Wave bulb that supports S2, but it is not a color bulb (product manual) so that can explain why they aren’t running into a similiar issue. I couldn’t find it for sale anywhere so maybe it’s not released yet. Since it’s not color it wouldn’t meet my needs, anyway. Just passing the info along in case it is useful to know.