Anyone notice that you cannot add the Red Series to SmartThings Scenes. Get an error when trying to save. I checked with support and they said the device handler needs to be updated. @Eric_Inovelli any thoughts?

I just tried making a scene with my red series and it added and saved just fine. Which app are using…the current one or the classic?

Sorry should have mentioned Classic app. 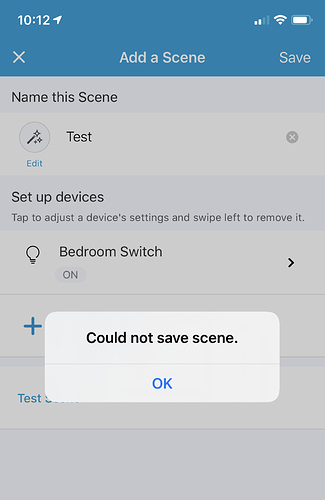 I have a slightly different error, as soon as I select the switch, it kicks me out of scenes on the classic app.

Do you have the current app, not classic? I have both and use each one for different things. I had no issues making a scene with the red series on the current app. It’s very weird how Samsung does things with respect to both apps and hopefully someday ST will figure out how to merge the two, I honestly like the new app in some respects, but the lack of classic functionality is maddening.

I think if they paired down the “classic” to just an advanced device type manager and left automation and control to the current app, it would be good, but the crossover is so annoying.

Try the new app and see if that works if you can.

Hey @ffingers - you’re using the new app with the Red Series switches? If so, are you creating scenes (ie: double-tap) and/or able to edit parameters?

Last I checked, I couldn’t do anything in the new app.

This would be awesome news!

@Eric_Inovelli I don’t really use the new app a lot, more just for turning things on/off and check overall home status quickly. If i’m on my phone it’s the new app or ActionTiles.

In the new app, you can’t control parameters or do anything advanced with the Red series. You can just turn it on and off is all. But for scenes, you can have a scene turn a Red series on or off within the new app. In the classic, the switch does not work for scenes (sort of odd). You can’t do double-tap or anything like that, just simple on/off.

Tried the new app and I can add the Red Series to scenes. Classic app has all the advance functions, I figured I’ll do everything there.

So I’ve been running into a lot of issues with scenes in smartthings to the point they aren’t usable. Created a scene last night to dim lights but anytime I activated it, at least 1 set of lights (if not more) would go to full brightness. Today I tried to create a completely new scene and I get the same error above (cannot save scene). This has all been through the classic app. I tried creating a scene in the new app and similar results in that at least 1 group jumps to full brightness when I test. Not sure if this is a smartthings issue, inovelli issue, or combo of the both

I have the same issue where when I try to add the Red Series Dimmer to a scene it will close out of the scene creation window. I think it’s related to the device having child devices, as I have another device the uses child devices and it does the same.

I removed the notification setting and deleted child devices and I can now add it to a scene in ST Classic, but cant set any additional parameters besides brightness.

It works to add it to a scene with child devices enables in new ST app, which I haven’t really used much up until now.

As @Tboutain said it has to do with child devices. However you can create the scenes in the new SmartThings App and use them in the classic app.

Just wanted to bring this thread back up. Using the non classic smartthings app and can successfully create scenes now however dimming multiple inovelli switches is a total crapshoot. Some will dim, some will turn to full brightness and then dim and it seems state dependent as well. From completely off, I can get them to work but if when most of the lights are fully on, some will dim to proper level and others stay at current level or even get brighter. Any ideas? I assume it’s a smartthings issue since scenes from inovelli dimmers seem to work flawlessly

Question: Are all the bulbs the same? Have you tried creating a lighting group in the new app?

Bulbs are not all the same. I’m using a mix of high hats and screw in bulbs for fixtures (all LED, however). This latest round i did create a scene in the new app.

Just to reiterate, “scenes” that I create and assign to the inovelli switch itself via smart lighting or ABC manager seem to work without an issue. It’s just a matter of convenience for me to be able to adjust scenes via the Iphone widget when we’re sitting on couch or in bed.

Using the new app and red series dimmers without any problems in scenes.

Yeah mileage will vary. I use scenes via webCore and it’s inconsistent at best and very laggy.

Out of curiosity @Beko what are you using to set your scenes and how complex are they?

I have had no lag or any other issues with Webcore. Having said that, I have migrating most everything to SharpTools. It is the easiest way I have found to integrate Smartthings and Hubitat