Has anyone had any issues using the GE Enbrighten Add-On Switch with LZW31-SN Red Series Switch? I purchased this set for several three way and four way switch setups. At nearly every location the GE add on switch rarely commands the Red Series switch consistently. Sometimes the switch will command it to come on, but will fail to turn it off or vise versa. The firmware of the LZW31-SN was at 1.35 and I just upgraded them all to the 1.43, but the issue persists. I also swapped out my hub from Smarthings to Hubitat, but still the problem remains. I’ve reset the Red Series switch to factory defaults and reset the config for it to recognize the Add On switch. Most of the locations are also without a neutral wire, but one location does have a neutral wire. Both locations have the issue, but at times it works and other times it doesn’t. Pretty much driving me insane

In hubitat you are using the 3-way with momentary option?

I have a 4-way setup with GE AUX switches and have not had issues with the AUX not controlling the inovelli (hubitat is my hub).

You’ll need to ensure it’s wired correctly, but mainly the parameters need to be set for 3-way/momentary when using AUX switches.

I’ve checked the wiring so often I’m wearing the screw driver out.
I’ve made sure multiple times the non-neutral parameter is set along with the 3 way add on switch parameter. The momentary option… that one I haven’t heard or seen yet. Is that something else that needs to be set?
I’ve had this issue with both Smartthings and Hubitat, so there’s something I’m missing. 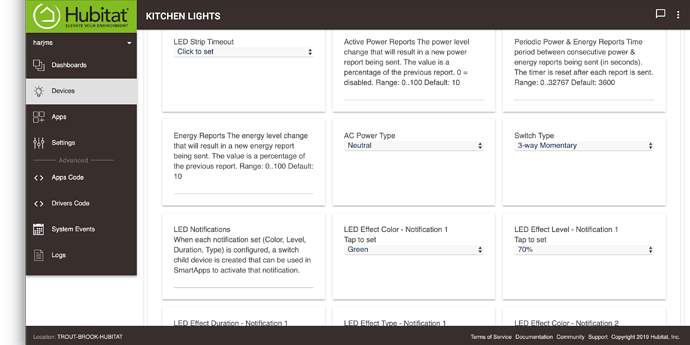 Wow never saw that. What should it be set to?

Are you using the Inovelli driver for the LZW31-SN? If so the aux switches are ‘3-way momentary’

Ok perfect! I’ll go through all the switches and see what happens. Thanks!

Just a close out update…
I’ve run through all the switches and came across a couple things. After using the hub and setting the non-neutral and 3-way momentary that appeared to correct most of the issues of the aux switches not responding.

I did come across another issue which is rare I’m sure. It turns out one set of lights in house were Bluetooth enabled lights. When the house was purchased they were all found to blink once when turned on. When I pulled the fixture I saw the words Bluetooth Mesh on the side of the can and realized immediately why they were blinking. It turns out that is the indication they were searching for a Bluetooth link/connection. The thing is the blink caused the Inovelli switch to either reset or lose power most likely due to the load changing on the circuit during that blink phase of the lights. Once I cleared the connection search the Inovelli switch no longer had any issues with any of the Aux switches or with the switches resetting or losing power.

Thank you all for the help!