For the life of me I can’t figure out how to wire this switch to make it work. I have tried every configuration I can think of and the switch doesn’t turn on. Below is a picture of what I’m dealing with. Any help that can be provided would be greatly appreciated! 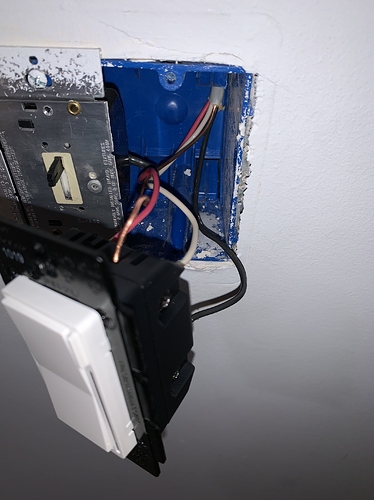 It’s a little tough to see from the picture that you posted. Perhaps you can pull the switch out more and take another picture.

But let’s start with this. I see the 3-wire Romex that is exiting the box at the top right. Are the black white red and ground all from that 3 wire Romex the only conductors connected to the switch?

That switch should be placed it in the box where the power comes into that run. If that were the case, I would expect to see a second 2-wire Romex with a constant hot in the box. It may be your picture, but I don’t see it. So as of right now I’m thinking that switch is in the wrong box, but better pictures may tell a different story.

Also, can you confirm that the switch is part of a 3-way run? In other words, this is one of 2 switches that control a light or series of lights?

As Bry said it’s difficult from this photo to see the wires coming from the top right Romex.
A few questions in addition to Bry’s 2-Way / 3-Way question

A voltage tester would be helpful. There Non-Contact type that are supposed to tell if a wire has voltage by just touching a wire. Most common complaint is they are too sensitive and shows wires that are not “hot” to have voltage However I’ve never used one of these and I read mixed reviews. So if you try one be sure you can return it.

Or you can get something that has to touch the wires but provides a reading. And they do not have the sensitivity issue that the non contact testers have. Because they are touching the wire they are pretty much right on.

What was in this location before you switched to the dimmer? Do you recall how it was wired?

. . . and do you have pictures of how it was wired before you replaced it?

Here is another angle 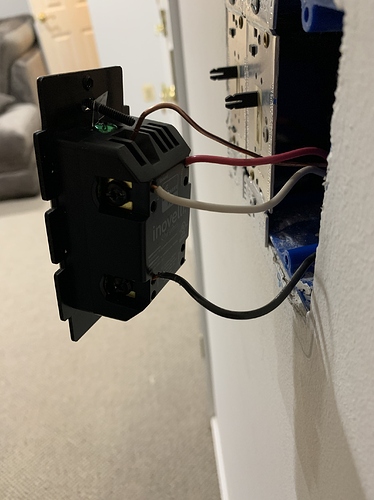 You didn’t answer my questions regarding confirming if the switch is part of a three way or if there are more wires in the box than are connected to the switch. Based on your additional picture, I’m going to assume that this switch is part of a 3-way since I see a red wire presumably from a 3-wire Romex. I’m also going to assume that this is the only Romex in the box since your picture doesn’t show any others.

If that’s the case, you can place the Inovelli in this box. The Inovelli requires constant power which you don’t have here. This would be a 2-wire Romex where power is being fed to this leg. Since you don’t have that here, it’s either a) in the other box, which would be good; or b) fed to the light first which isn’t so good.

The first step in diagnosing three-way circuits is to determine which box/Romex is the source of constant power. Once you know that you can figure out the rest.

Sorry for the delayed reply. As a new member, I wasn’t allowed to reply until someone cleared me.

There are two other switches in that box, but they are connected to a different circuit in the circuit breaker than the switch in question, so I’m assuming they aren’t part of the equation here, but let me know if that’s wrong.

The switch we are dealing with controls the lights on the staircase going from the main floor to the basement. There is a switch at the top and bottom of the stairs controlling the stair lights. I have shown you pics of the switch location at the bottom of the stairs. Below is an additional picture of how the switch was wired before I put the smart switch in (I would provide you more pictures but the system will only allow me to post one picture because I’m a new user). 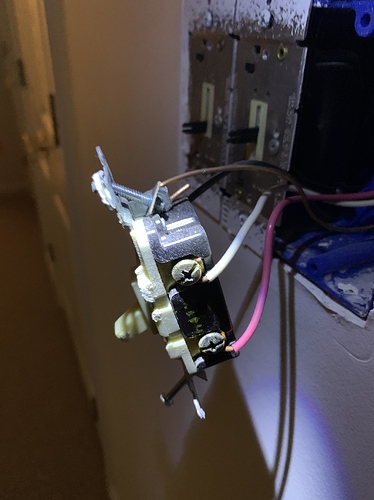 It sounds like you are saying I may be working in the wrong location and that I should be working on the switch at the top of the stairs. If so, not a problem, it has the same wires. Can you tell me though which spot in the smart switch each wire should go?

I also have one of the GE add on switches, so it sounds like that would go in the basement switch where I currently have the smart switch, correct?

Thanks for your help and sorry for the slow reply.

so I’m assuming they aren’t part of the equation here, but let me know if that’s wrong.

No, that’s correct. They are totally unrelated

It sounds like you are saying I may be working in the wrong location and that I should be working on the switch at the top of the stairs. If so, not a problem, it has the same wires.

Yes, it does appear this isn’t the proper box for the Inovelli. I’d like to see how the other box is wired. We have to find the source of constant power. If it’s in the other box, great. If it’s going to the light first, not so great. Please post a picture (or more if you can) of the switch at the top of the stairs pulled out.

Here is the picture for the switch at the top of the stairs. 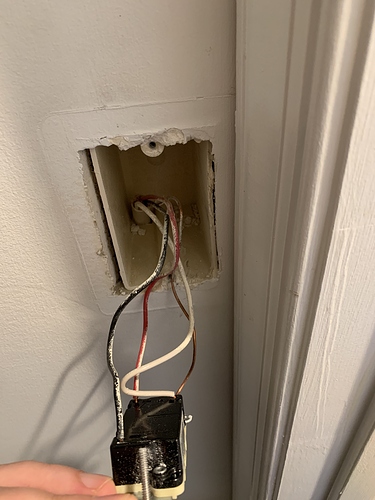 Thanks again for all of your help!

Here is what you have. At each of your switches, you only have one 3-wire Romex. This suggests to me that the constant hot is first coming into your light(s). If you look at the diagram, you will see that a constant hot is routed to one of the boxes. But there is no neutral in either of the boxes and therein lies the problem. The Inovelli switches require a neutral. 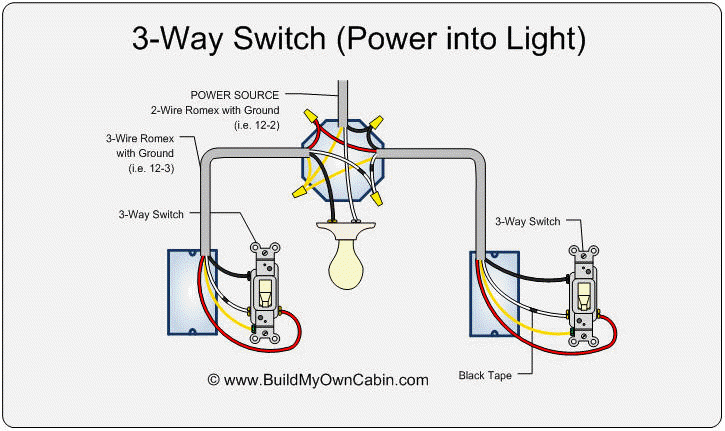 So, one of the main reasons I purchased this switch was because it was advertised on Aamzon as not requiring a neutral, https://images-na.ssl-images-amazon.com/images/I/81FbRMRsyoL.SL1500.jpg.

Is what’s listed on the Amazon page wrong? Is there any way to get this to work without re-wiring the switch?

I got the Red Series Dimmer Switch, so it sounds like you’re saying that should work. If so, how should I connect it to the switch at the top of the stairs?

@dschmerl - If the top of the stairs isnt where the first leg of the line is coming in, you;ll either have to move switch to bottom of stairs or re-wire behind light fixture to basically route line to top of stairs vice bottom of stairs. (assuming picture @Bry is correct layout).

What @harjms said. You’re going to have to figure out which of your two boxes have the constant hot. In the sample diagram I posted (presuming that it is representative of your situation), the box on the right has the constant hot. Note how the hot comes into the light and then is routed via the black to the common terminal of the switch on the right.