Thanks for this platform! I am excited to see what comes out of it!

I know i brought this up in the past but i would love to see a single gang switch with two dimmable light switches on it. Just like the fan but two of the top half instead of a fan at the bottom.

I have two uses for this right now that I would love to use. I also have seen people search for a similar solution in the past. I feel this would be the only product on the market to serve this need.

Hey @neminat - I feel like we’re best buds now! I enjoy our chats on Reddit and looking forward to hearing more of your ideas here.

I do like this idea and look forward to seeing what others think too once more people join.

Out of curiosity, can you let me know what the setup is you’d be using these for? I’ve only really ever seen these types of switches in a bathroom, but it’s usually an exhaust fan and vanity (or overhead lights), so it would be an On/Off + Dimmer Switch.

So I’d love to hear how yours is setup!

Great hearing from you and welcome to the community

I think my use case is relatively rare but who knows. When we redid my kitchen the electrician combined my lighting into two switch single gang paddles. One set is for the over the sink light and undercabinet lighting. I would LOVE to be able to dim both of those. The other is for two sets of ourdoor lights on my patio. Dimming would not be so important there in my case.

I am not sure how many others would have a setup like this, but i have seen a few questions about it pop up on reddit from time to time. Clearly you would need enough to make it worth it. Just hoping there is enough desire in the marketplace to make that happen ha.

Hard to see but i found a pic that has what i am talking about. 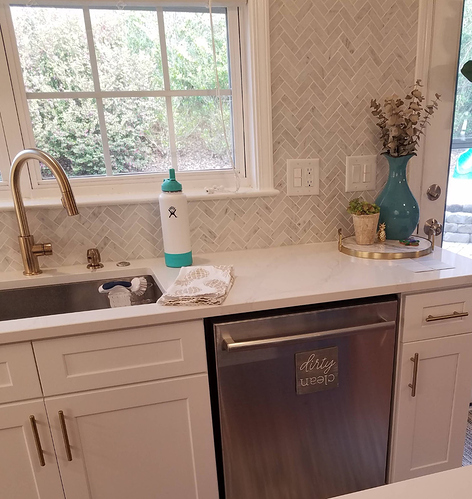 So I have a few cases where they can. Be used
Bathroom: on/off but 3 paddles instead of 2. Over head lights. Vanity lights and fan
Office/guest room: light and fan. Dimmer and low med high for fan
Kitchen: on/off and Dimmer

Hope we can get some made as there are no good options out there.

Wow @neminat – let’s talk about that backsplash. It looks amazing! Kitchen looks really nice too. They did a really nice job. I hope my wife doesn’t see this post otherwise it will add fuel to the fire on getting the kitchen redone. We’re still sporting 1970’s floral wallpaper

Thanks for the visual though, that really does help. This idea does also seem to be catching wind too, which is exciting.

One thing I thought of that may help you in the meantime (as I know home automation can get addicting fast) is that you could install these behind there:

Full disclosure: I’ve never tried these, but I’ve seen people recommend them to people who want to keep the look of their, “dumb” switches, but turn them smart. Aeotec is also an awesome brand, which I highly recommend.

Anyway, thanks again for championing this idea!

Awesome, this is actually really helpful, thank you!

Also TIL there are three paddle switches. This is pretty cool actually. It may be hard to get three separate modules into a switch, but who knows, it’s worth a shot!

Thanks for the input, I really appreciate it and it’s great to hear some other use cases.

Thanks! I appreciate it. The wifey somehow talked me into redoing our kitchen this year. It looks great, but it hurt HA HA.

I’ve always wanted a smart dimmer and an outlet in a single gang device which no one makes either for our bathrooms I tried to add an Aeotech nano dimmer but there just isn’t room in my metal mid 60s vintage electrical boxes. I will likely someday get around to upgrading the single gang boxes to a double.

I would add another use for dual switches (dimmer & on/off) would be old or otherwise crowded multi-gang wall boxes. I frequently don’t have room to add smart switches to those multi-gang boxes because they are:1) old and a little shallow, 2) the boxes have too much wire/larger gauge wire (I’m loath to trim down wire in a box which would leave me with little future flexibility), or 3) the smart switches are just too darn big. I’ve even tried the micro switches (including the dual switch ones (without dimming options

Keep up the great work and the responsiveness.

I’ll chime in here as well. I only have ONE of these in the house and it was a new construction and the result of a “flub” by my electricians part where he put a switch for a closet INSIDE the closet (facepalm). So I had him pull it out into another box, but rather than rip out drywall to put in a two gang box, they used this double switch. The top switch is for the room and the bottom for the closet which is near the door entry (it’s a small walkin).

That being said, in my previous house, I had a few of these in the same vein as @neminat and would have loved to have replaced them with something smart. I think there IS a market for this, granted it would not be nearly as great as traditional switches.

Maybe, if the market for the switch isn’t there, maybe you guys could look into something like the aeotec version, that could be smaller (if even possible) to fit in boxes as it seems if you have these types of switches, you likely have a crowded box too.

I dunno…I like the idea and think its needed in the HA space as it’s one of the only switches I see that don’t have a “smart” counterpart, but the market is not likely huge (but ill DEFINITELY take one if you make it

I would also love to see this, I have about three switches like this (double) in my house and in one of them I am using a dual relay that works pretty well but my OCD kicks in when the rockers are the wrong way when both switches are on or off.

It isn’t two dimmers in a one-gang switch, but Zooz recently released this thing which is a dimmer plus an on/off switch in a one-gang package.

Since it’s a relay and not a dimmer, it can also be used for fans (assuming you don’t want to control the speed of said fan — bathroom exhaust perhaps?)

This would do what I need but I’d like to wait and see how long it will be for Inovelli’s version to come out first.

I could make use of dual switch and or dimmer is a single gang.
I’ve seen something like this

but I can’t remember the vendor.

i really need something like this but much prefer Inovelli’s design on their on/off and fan combo. It looks SOO much better.

@Eric_Inovelli any eta on this by chance or have you changed priorities? Id like to wait, but dont know if that is still 3 months, 6 months, or not currently on the roadmap.

I would like to upvote this thread request. There are no single-gang double-dimmer switches on the market that work with LED that I can find (Zooz being the closest with their dimmer/switch combo). Lutron has a double but it’s non-LED only and it’s a dumb switch. I really don’t want to demo a wall and tile (finding matching tile = challenge) to add a gang…

Im constantly looking for something like this. I love my Inovelli smart switches and could really make use of a single gang double load switch, both dimmable and just straight on/off. I upvote this post.

Adding my upvote. I’d be perfectly happy with non-dimmer versions of these, in case that makes this easier to implement.

My use case is similar to those listed above - existing old boxes in the wall that are too cramped to take on more than one smart switch, and am not in a position to rip out the old box and add in a larger /more spacious box.