So I’ve wired up two red series dimmers according to this diagram:

My issue is that while the switch sending load works as normal, the switch in the line box does not turn on (no led) or pair. I replaced it with a different switch so I know it’s not the switch, and must be the wiring, but my multimeter tells me I’ve got line coming in to the line box and going out to the load box, and that switch is working. What could be the issue? Am I missing some obvious config step? Pictures below: 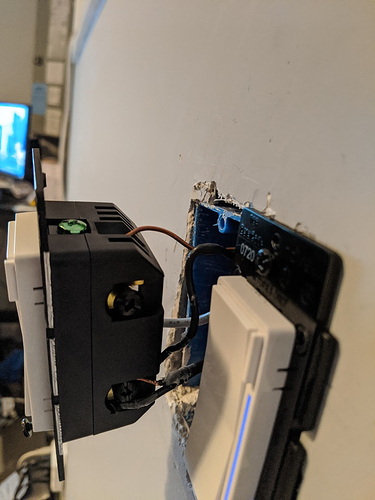 You can see the loop is hot, and that wire coming out the back goes to the load box (I tested pulling it out, and the load box didn’t work) It’s hot as well. nothing else except the neutral and ground plugged in. 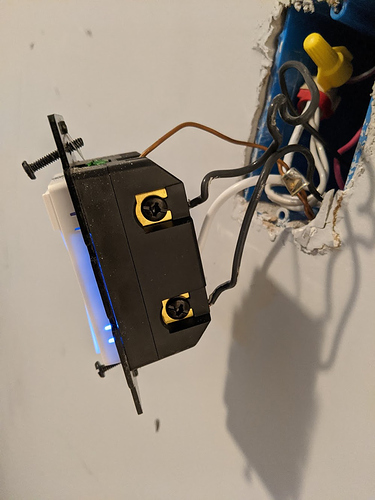 So just so I understand, the black loop in the “Line” box (top photo) is hot. If you test between that exposed piece of copper on the black loop and the ground you get 120V?

The black loop then connects to the Line on the other Inovelli dimmer? You removed the backstab black conductor from the Load switch and the other switch (bottom picture) stopped getting power?

If that loop is hot and the hot is going out the backstab, then that leaves the neutral. Loosen the screw on the neutral and remove it. Reinsert it with the screw pushed in so that the conductor is seated between the plate and the outside of the switch. If you get it on the wrong side, you may not have a good connection.

If that doesn’t work, meter between the black loop and the white that you have backstabbed into the neutral. Do you get 120V? I can’t see where the white is coming from to tell if it’s really a neutral.

So I had tried that, but what I hadn’t done was what I should have in any troubleshooting scenario: start completely over and see what’s wrong. The issue was my neutral pigtail came loose when I pushed the unrelated switch into place. I took out the other switch to make sure everything was tight in the back of the box and well… it wasn’t. So your instincts were right, it was the neutral. Good call, and thanks!