Will the new fan switch work with a fan that has its own remote control?
Specifically this one:

Think industrial, loft or rustic-modern, the Pioneer ceiling fan by Craftmade hits all these genres and more. Scalloped galvanized steel surrounds the heavy-duty motor and LED light source of this indoor-outdoor fan. The custom greywood all-weather...

I opened up the existing wall switch for the fan (it’s a proprietary remote-type Switch) only to find the red wire isn’t used at either the switch end or the fan end Only the black wire. Makes me suspicious this is going to work…hope there’s a way!

If you pull down the fan what does it look like in the canopy? Is there a remote module wired in there, that can be removed? If so the LZW36 will likely work as long as there is 120v and neutral at both ends.

Does this thread about another Craftmade fan help???

Hi all. I just got my Fan/Light switch (LZW36) and am excited to set it up and add it to HomeAssistant but I’m having a little trouble with the wiring. My fan does not have a similar controller box, which would make a simple replacement. Here are pictures: [IMG_20200703_163802] [IMG_20200703_163839] I will try to explain the wiring as best I can: There are four places the wires lead to, an arc shaped box which I assume is the controller, a small rectangular box (closest to arc), a large rec…

No, there’s nothing but wires going into the fan…

No, very different model (and year of manufacture) it seems

Take a picture of the switch pulled out from the wall and the canopy module wires coming from the fan.

If you have the following it SHOULD work:

There’s only black and white going into the fan housing. Guessing that means it isn’t going to work huh? 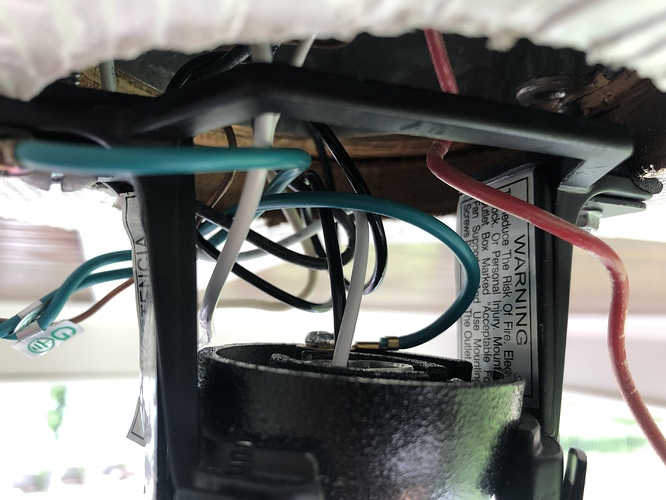 Hrm I see what you are saying, seems like you might have to go deeper inside the fan to see where the fan/light wires split off from the main power. Seems like the receiver remote would have a unit. Might require some more teardown. If you are comfortable with that, we can work with you to resolve here in the community.

Finally got to tearing open the fan. Attached are the pics. Let me know if you can decipher how to wire from this or if you need more pics. Most of the wires are related to the internal receiver unit. But I can’t figure out how to do this. There’s not a red wire that strikes me as corresponding to the fan load. The blue wire does correspond to the light (there’s a label on it). My guess is that the red, pink, gray, and tan wires are for the fan load and need to be hooked up somehow through the capacitors. But, even after opening up the receiver, it’s not clear how the connections should be. Need some help.

Perhaps this link has some relevant info but not sure. 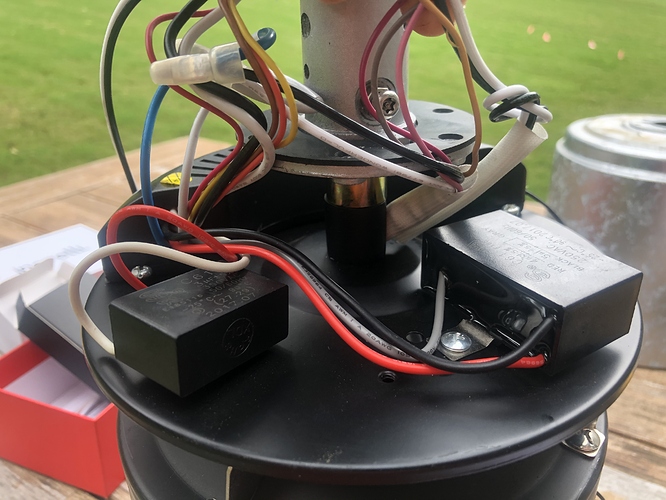 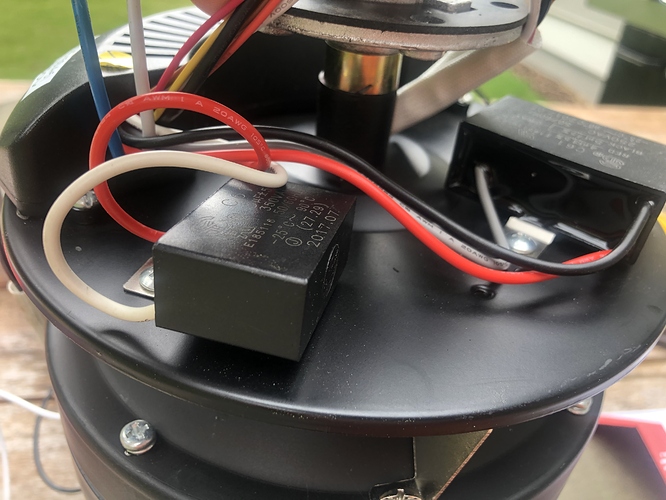 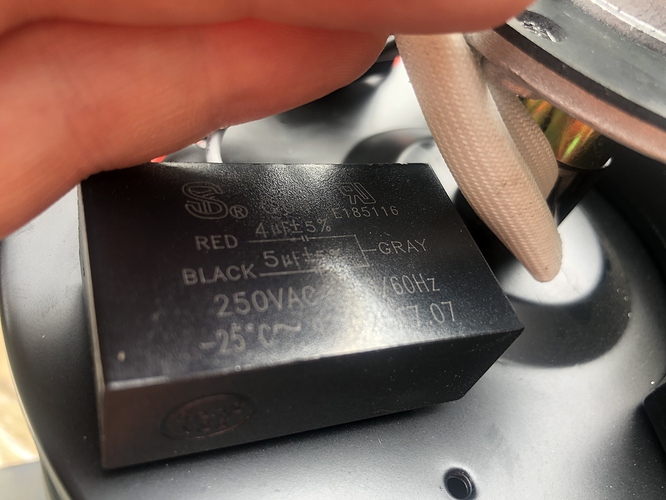 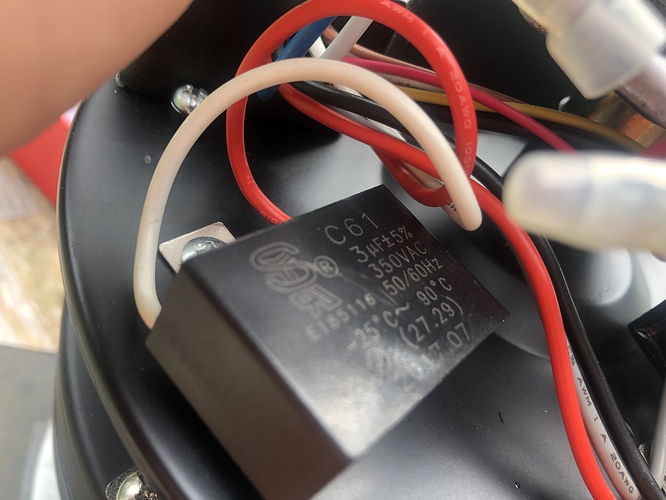 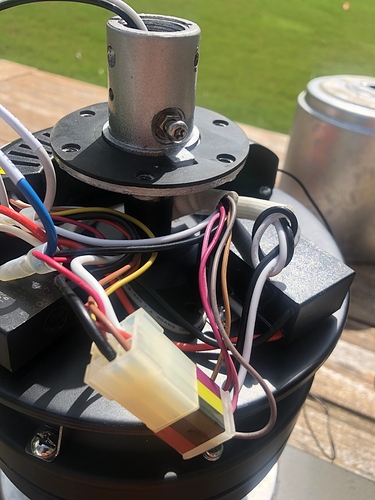 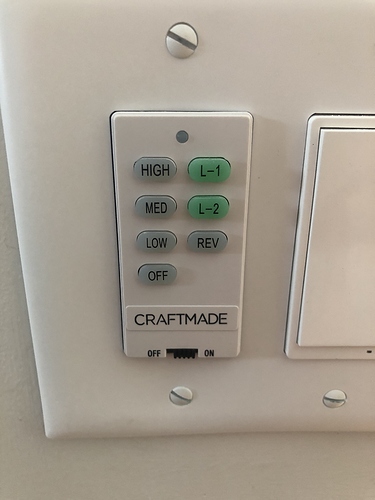 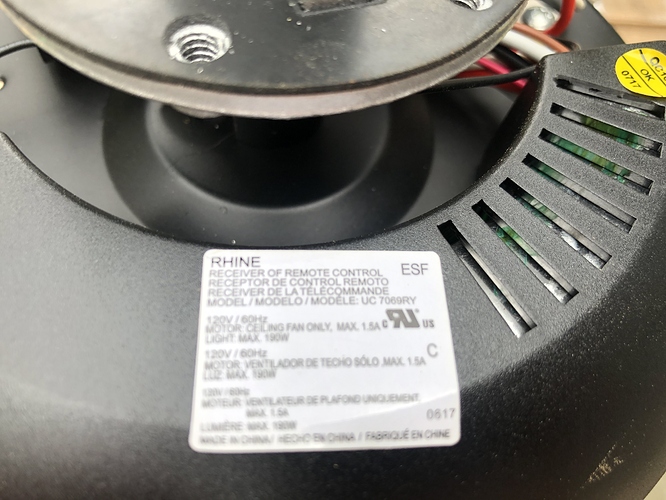 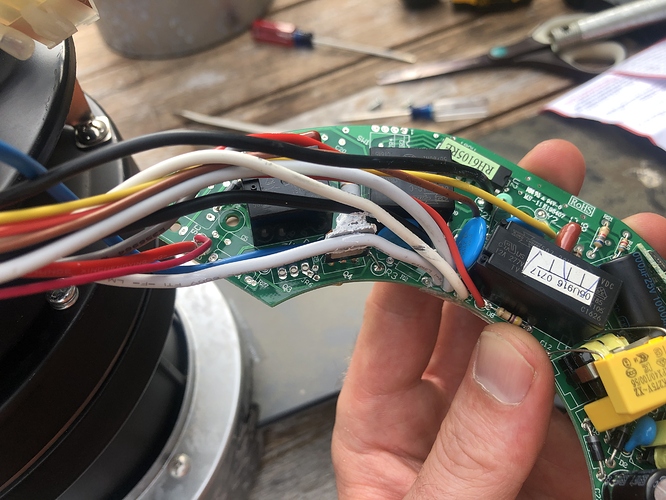 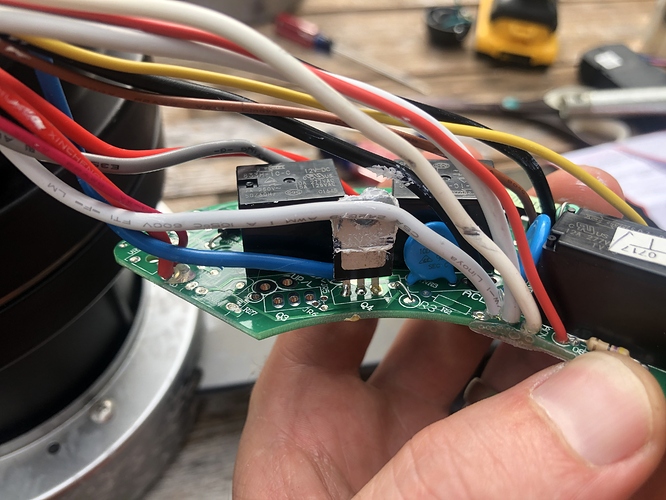 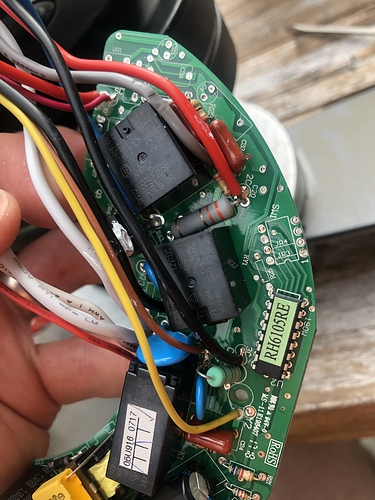 Actually, I think this link does help somewhat. I think I need to do the same sort of thing, but the color of the wires is different. So need to figure that out, but it seems it is definitely doable.

EDIT: yup, that link did it. It wasn’t apparent that the link was relevant until I opened up the fan and saw the internal wiring was similar. Thanks!

Ok, well, I tested it and everything worked. Then, I put the fan back together which involved keeping the inovelli receiver still inside the ceiling fan housing. That housing encases the receiver within two layers of metal. Seems that makes the communication between the inovelli switch and the inovelli receiver not as reliable as it needs to be. I know how to wire it so that I can move the inovelli receiver out of the housing and up into the canopy. I think that will probably make it more reliable. However, I have run into an issue trying to fish a wire up the fan downrod. At the point where the downrod attaches to the ceiling fan housing, the two existing wires are encased in a sort of white rubber that makes those wires immovable and makes it to where no other wires can get through. See pic. What is that stuff? Can I remove it and if so how? Or any other way to get the one wire I need up the downrod that you can see? 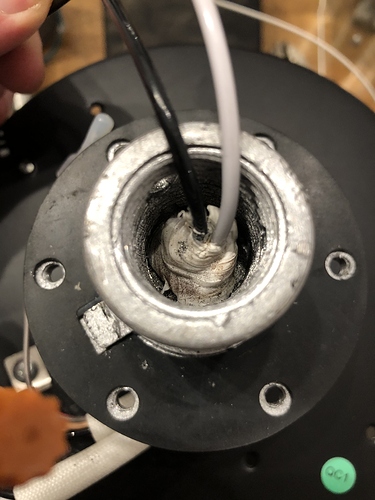 Or any other way to get the one wire I need up the downrod that you can see?

The Inovelli fan canopy module requires 2 connections, one hot and one neutral. You should not have to be fishing a wire up a downrod. They should just connect in the fan’s canopy. Why can you just connect the hot and neutral where those two conductors come out on the other side. The pic is looking from the top down, right?

The wiring for this particular fan is as below (found at the link in the accepted solution).

image1125×2436 305 KB
The small red and pink wires are tied together. I need to get it to where those wires are extended through the downrod up into the canopy where the receiver will be. I am already using the black wire for the light (blue) and the white for neutral. So I need another wire (I think a single wire tied to the red and pink will do, or do I need two small wires?)
lnjustin September 13, 2020, 11:53am #14

I successfully wired and installed this as described above. Having the inovelli receiver in the housing reduced the reliability of the RF communication. So I extended the wiring of the fan up into the canopy and connected the receiver there. Working great. Thanks for everyone’s input. Took a lot more than I expected but glad it is working now.