I bought the Red Series dimmer switch because I don’t have a neutral in both of my outlets.

I’m pretty sure the wiring to my current switch looks like this:

I’ve tried to wire it like the instructions in the manual state with my original “dumb” switch, but I loose 3-way functionality. Whenever I turn the dumb switch to “off”, I’m not able to turn the light on from my Inovelli.

I thought this might be the case based on instructions in the manual, so I tried a GE add-on switch. In this configuration (based on the manual), neither switch works.

Is this expected behavior with a dumb switch? Is there any way I can make both switches work in a 3-way configuration?

(posting images in a reply due to forum limitations)

Here’s the configuration that only works from the Inovelli switch: 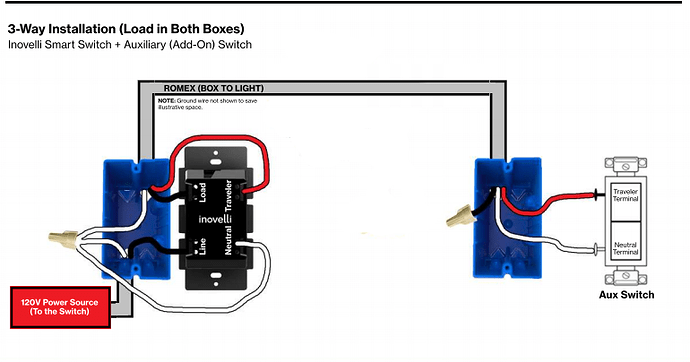 @adamrb -Did you set the smart switch parameters 21/22? You’ll need to tell the switch it’s a 3 way toggle or momentary configuration.

I didn’t originally, but did after your message. With it set to “dumb switch” mode, I can now hear the relay click when I press the switch, but it didn’t change the 3 way behavior with the dumb switch. I haven’t tested with the add-on switch.

With it set to “dumb switch” mode

Your initial post states the power comes from the light and there is no neutral wire at either switch. Yet the 2 diagrams you are attempting to follow are both for neutral wiring. 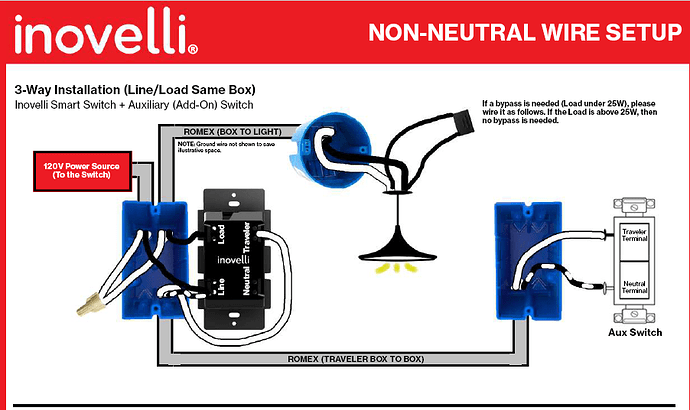 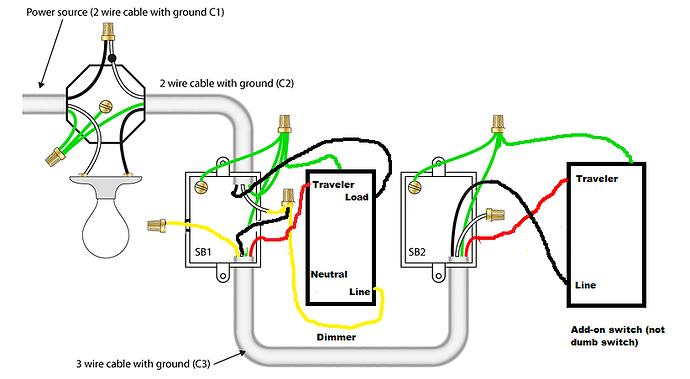 I just pulled that from the manual. It also reflects a neutral in the box on a non-neutral setup. I found it kind of odd.

@Bry’s diagram is spot on assuming you’re assumption of power feeding to the light first.

I found it kind of odd.

Yep, that doesn’t make any sense to me either. The non-neutral configurations are going to have power to the light.

OK, did you figure this out or are you still having problems?

If you are still fighting it, I have a question. You say you have a Black/White and a Black/Red/White cable in the “main” switch. Was this circuit already a dumb three way (two different switches) circuit? If so, what wires do you have in the SECOND switch box? Obviously you have the Black/Red/White, but are there any others? Another Black/White for instance?

Secondly, do either of the switches share a box with another switch?

The suggested configuration mostly works. The Inovelli side seems to work about 95% of the time, or at least often enough to make me wonder if I just hit the wrong button in the dark when it doesn’t. The Aux switch only seems to work 70% of the time, at least when I’m quickly (within a second) turning the lights off/on and then back on/off. I’m not sure if this was related to the load (I do have all LED’s on the circuit, but I have enough of them that I’d expect it to be over 25W.

I’m waiting on a bypass switch to be delivered from Amazon just in case. The lights definitely flicker when dimmed low enough.