Z-wave Group Associations working but not registering in Home Assistant

Removed a different example to make it, hopefully, clearer…

I set the motion sensor z-wave group association Group 2 linked to the closet light. In general, it works great. The door opens, the light turns on and a couple of min later it turns off. When the light is on, the blue LED on the Inovelli switch lights up properly indicating it is on. However, Home Assistant still shows the switch as off. Interestingly, the energy consuption (W) does increase so it is sensing that it is on.

The switch can be controlled manually and through Home Assistant and this works and shows correctly on the siwtch and in HA.

Thoughts on what may be wrong and how to make Home Assistant properly show when the light is on? It’s affecting some other automations and my OCD. 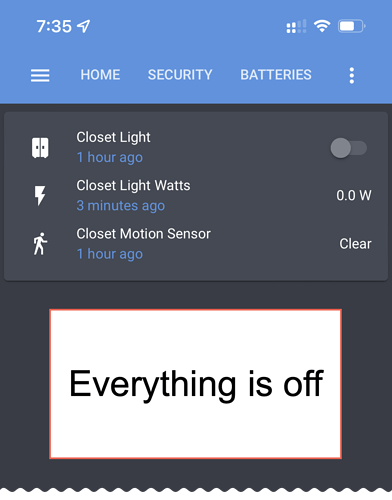 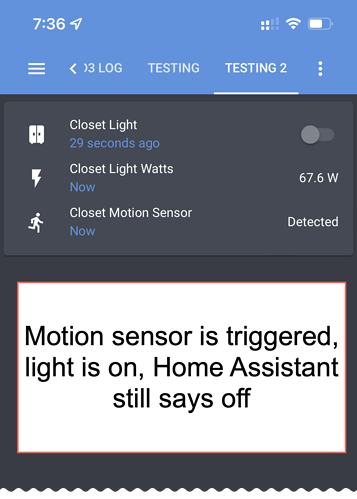 If you check the state in zwave-js does it show it as on or as off?

I’m not sure I’m quite following exactly how you have it setup, but one thought I’ve got here are the settings for parameter 12 in zwavejs.
12-1 Association local
12-2 Association 3-way
12-4 Association Z-Wave

If the automation is turning on the wired dimmer, but your dashboard shows the associated dimmer, if Z-Wave association isn’t enabled than the entity won’t change states.

Only thing I can think of right now.

Thanks for the thoughts.

I believe the Parameters you’re referring to are for the Dimmer. For the Switch, Parameter 4 is for Association behavior which is the closest parameter and it is set to 15 for the Closet Light switch which sends All commands.

I don’t have an automation connecting the motion sensor to the switch, but have paired them through Z-wave associations which should be faster as it will bypass the hub. That being said, I thought the switch would still be registered by the hub as on when it was turned on by z-wave association.

Actually, it sounds like my issue is the same issue that @EricM_Inovelli noted was a known issue with the current firmware for the LZW30-SN: Lzw30-sn association states not reflected in HA - #17 by EricM_Inovelli

I’ll follow that other thread and firmware updates to see when it may be resolved.