Ours will come later.

Overview
We have a unique opportunity in that a major alarm company wants to purchase some PIR sensors from our manufacturer and they do not have a house brand, so they’ve chosen us to be their brand of choice.

This is an honor as we don’t make PIR sensors, but their track record with us and our switches and bulbs really made them push us to carry a couple of different sensors.

The project is a bit different in that we don’t have the flexibility to change much outside of some firmware changes as this is a, “white-label” product (already produced by the manufacturer, we’re just putting our name on it) so we’re just putting this out there for visibility.

At the very least, we can build on the white-label and if this project takes off, we can ask for hardware changes and possibly come out with our own version.

Introduction
As per our tradition of working with you amazing people, here’s what this thread allows us to do as a community.

How this initial post will be laid out is in five sections:

Ok, let’s get this party started!

Project Overview
The purpose of this project initially was to provide one of the (if not the largest) alarm companies with a solid PIR sensor. We were approached by them to put our brand name on a sensor for them to resell as they do not have their own, “house-brand”. In addition, we thought, “you know, who wouldn’t want a PIR sensor? It’d work well with our switches and bulbs” so we decided to carry this ourselves.

Since this PIR sensor is pet immune (up to 80 lbs) we wanted to name it after one of our favorite dogs - Pongo.

Pongo - Hardware
As mentioned, this is a white-label product, so we don’t have any influence over the current version of the PIR sensor. 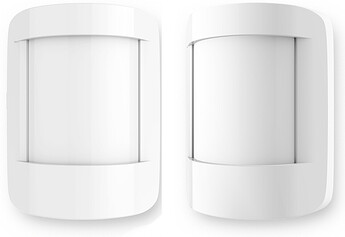 I’ll get a better picture, this is all I could find online.

The sensor will have the ability to detect motion and lux, while also being immune to pets under 80 pounds. You an also alter this sensitivity if needed.

Pongo - Software
We do have a bit of wiggle room here to improve the firmware, but depending on the timeline of when the alarm company wants these, we may not be able to implement them all at once.

Firmware is pretty simple and includes:

Timeline
Ah, everyone’s favorite part. When is this flippin thing going to be released? Great question – here’s the high-level of what happens leading up to the first release of the timeline:

Again, just want to throw this out there – I don’t have a crystal ball so I can’t predict things that come up along the way. Trust me when I say we’re trying our best to get things launched on time.

The good news is all the heavy lifting has been done here and this should be a simple project (knock on wood) as the hardware has already been developed, the firmware has been developed and also certified by the alarm company as well as the Z-Wave Alliance. We’re just putting some finishing, “Inovelli” touches on them.

The initial timeline will be shown below and will be updated bi-weekly (if needed). We’ll update once this project officially launches.

Weekly Recap
Every Wednesday evening or Thursday morning, we have a meeting with our manufacturer to go over the various projects (status, issues, timeline, etc) and below I’ll provide a recap as well as edit the sections above so we can all keep track. If you have any specific questions you’d like me to ask, feel free to tag me and let me know so I can ask them as well. The weekly cadence for updates will be Thursday mornings (or afternoons depending on when we have the meeting).

March 25, 2021: We’ve received beta units for the alarm company to test as well as a couple extra for the internal team to test (Eric M, Nathan, Brianna and Courtney). Preliminary feedback to come in a comment.

So will these also be sold through Inovelli’s store and is there an expected pricepoint?

Edit, also possible to use usb or something for external power if we don’t want to use batteries? (assuming that would’ve been listed if it was included, but just in case)

So will these also be sold through Inovelli’s store and is there an expected pricepoint?

Yes, definitely will also be sold on our site. Sorry, I should’ve been more clear - the alarm company will sell via their own channels and we’ll sell via our own as well (ie: Inovelli, Amazon, etc).

Expected price-point is tbd – we’re currently negotiating this right now. I would say it will be on par with the market ($35-40).

Edit, also possible to use usb or something for external power if we don’t want to use batteries? (assuming that would’ve been listed if it was included, but just in case)

This, I’ll have to defer to @EricM_Inovelli as I don’t know if that’s a feature that has to be built into the firmware or if it’s something that is already built in and needs to be activated by the hub. It will be 700 Series, so it’s the latest in Z-Wave, but I’m not sure about LR and how that works.

That would be awesome!

This, I’ll have to defer to @EricM_Inovelli as I don’t know if that’s a feature that has to be built into the firmware or if it’s something that is already built in and needs to be activated by the hub. It will be 700 Series, so it’s the latest in Z-Wave, but I’m not sure about LR and how that works.

My understanding is that 700 series chips should support LR, but may require a firmware update.

That could be wrong, but was based on - (Z-Wave Mesh Network Wireless Solutions - Smart Home - Silicon Labs and Z-Wave technology gets new long-range capabilities | TechHive)

I’m pretty well sold on a 4-5 of these already. Maybe more… How long between motion detect and lux events (or lux on command)?

Are these rated for outdoor use?

@jtronicus I would say no, but that hasn’t stopped me from waterproofing sensors with dielectric grease and keeping them at least partially sheltered from the sun. I’ve got some Zigbee PIR sensors with the same ratings outside and they’ve been through a texas summer, and winter now.

Here is what I would like to see from a firmware perspective:

Just to double-check on these, they do not have a temperature sensor capability, correct? I know some motion sensors do, some do not, so I wanted to be sure about it (matters for some of my usage, not for other).

I only have one question…will it send a packet immediately to the hub-du-jour when the motion STOPS?

I currently have a Z-Wave motion sensor based on an alarm system PIR. It senses motion start fine, but just keeps reporting motion for ~5 minutes and then sends a motion stop. Marginally useful as a presence sensor, but my use is to detect when our dog is approaching his electronic dog door…and more importantly when he moves away from it. The ~5 minute thing just doesn’t work for me, and I’m guessing that it is designed that way to save batteries because the alarm company’s equivalent wired sensor does report motion starts/stops immediately…

I think you’d have to be able to plug it in for power for anything that short. I’ve got a zse18 (motion sensor not pir I recognize) that lost about 10% battery in two days with only a 15s clear timer (moderate traffic area). Drop that even further to 1s and I don’t know that it would’ve lasted more than a week.

Would be awesome if we could plug it in and adjust to that level though.

Adjustable cool-down between motion events is a must, down to VERY low levels, like 5 seconds or so. This would be further improved by a 0-255 byte with a 5 second multiplier (5*255 = 21 min cooldown, plenty).

My current sensors have a 1 min cooldown, and while it’s pretty quick, I’d trade battery life for a quicker response time. Just to add per above I am still at ~63% with 1 min cooldown in high traffic areas and I installed them in November.

My Aquara’s from China were $13 and serve the purpose, but I can see associations coming into play and being (maybe?) a slight bit more responsive. I’d have a really hard time shelling over $35 for one though, to be honest.

The description says S2, so this shouldn’t really be a problem; the only problem I know of is when you have S0-only devices (like Inovelli’s bulbs) and a certified 700-series controller locks you into S0 since the SDK does not allow for prompting in that case (when the device requests secure pairing). With S2, you should be promoted for a level — or none. That being said, S2 is also far less problematic than S0 (not nearly as chatty), so that already eliminates one concern for me. There are oddball devices like Ring that don’t seem to want to pair without S2 even though as far as I’m aware the specs say they should, so I suppose you could be referring to that, but those are unusual.

Anyway, I’ll be interested to see how these turn out! Z-Wave motion sensors aren’t usually super-exciting, and the fact that they are security-oriented (and pet-friendly) makes me think they’ll be a bit slow for motion-lighting automations, something that already plagues most Z-Wave sensors. But at least they have some extra features (lux!), plus they’re 700-series, so some excitement there.

Adjustable cool-down between motion events is a must, down to VERY low levels, like 5 seconds or so. This would be further improved by a 0-255 byte with a 5 second multiplier (5*255 = 21 min cooldown, plenty).

I think this here would be the single most important feature for anybody using these to trigger lighting.

Agreed. One of the things that makes Inovelli the best is they aren’t like “1 min is enough”, they actually listen and impelement and let the customer opinions matter as much as their own. I’m sure this will be easy honestly.

I think a firmware item Inwould like to see would be the option for a “party mode”. Just to be able to mute any notifications or actions from the device during certain situations that pop up.

This speaks to me as more of a hub condition (mode is NOT Party) than a device setting. Trying to understand a use case.

What’s the difference between this and the existing 4 in 1 sensor offered? With the current price estimate for Pongo being the same or higher than the 4 in 1, I assume something about it makes it worth not being in the (in my opinion