I’ve got open 1 Gangs everywhere in my house since it was originally wired with individual switches for Fan on/off Light on/off. I’m replacing these with HURRICANE

so I don’t want the new empty space to go to waste.

I’ve looked around that there are not very many multi-button scene controllers available. Or they are ones that need a proprietary hub.

Since you pretty much have all the existing code in the RED series switches to support this, it just needs to have more individual buttons.

I envision mag mounted and charged via cradle in a 1 gang spot, but at this point ANY version that can take up that ugly missing spot.

Would you consider adding this to your lineup?
Thanks Guys!

They dabbled in Z-Wave remotes / button controllers a while ago that are exactly what you’re requesting. Would be great to see these get attention again as Jasco abandoned theirs.

Hey guys – got some good news for you. We’re looking at kicking this off shortly. The manufacturer has this created already, but in WiFi/BT, so we’re looking to convert it to Z-Wave: 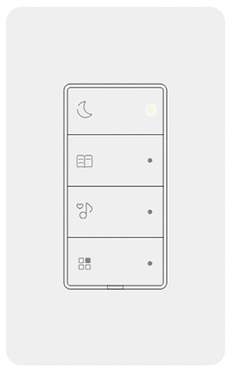 Still have some work to do, but it’s on the roadmap!

Sweetness! Removing icons I would agree. The hard part is how to handle(or not handle) custom icons. For sure try to add the Inovelli status bar. Do you plan on having 4 buttons or 8? In the picture above… Tap-left Tap-right so each space it 2? Let us know when you put up a wish list page. Lets get some traction from other Inovellitors

Thanks for the update Eric!

I vote replace the icons with an eink style screen, so you can set the icon with minimal impact to battery life. Granted that might be too high tech

Keep it simple. Just remove the icons. Maybe include a transparent sticker sheet with a number of different printed icons that the end user can affix.

I’d buy that… In z-wave form . Without the icons…

Looks pretty awesome. I’d love to have two sides to that- IE instead of 4 horizontal buttons each with its own LED, have 4 bars, each of which can be pushed on either side, and has an LED on each side.
Thus you can have 8 toggle buttons, or 4 buttons with a dedicated on and off side (and perhaps do dimming with push+hold like on a normal dimmer switch, ideally by direct association to the dimmer itself). You pick one or the other with programming.

I think as far as labels go, a pack of stickers is the way to do it. Best option I think is the kind where only the image itself is sticky so you stick it on and then peel it off and the icon remains. Either that or include a baggie of mix and match button faces that are pre printed, switch ships with no faceplate buttons, customer picks out the buttons/icons they want and clicks just those into place.
That might allow different size buttons. IE, have both rectangular ones (like in the image) and square ones (that would take up only one side, making it obvious that there are different functions). 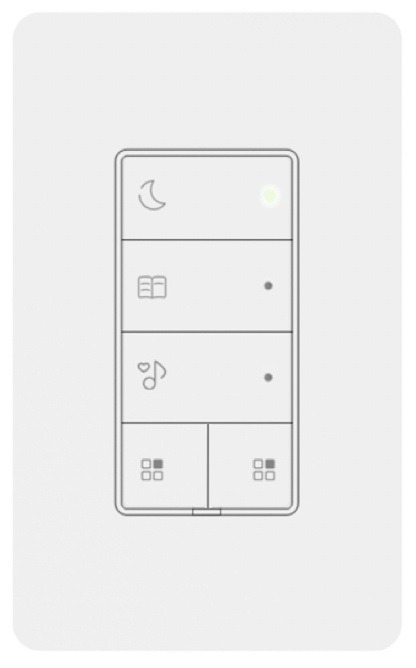 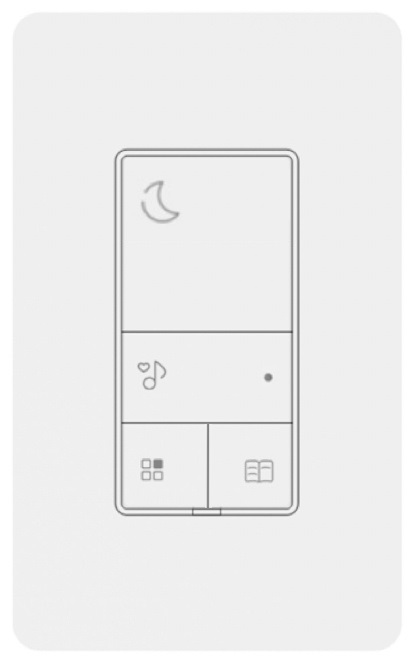 I’m with @amdbuilder. Using a small format e-paper or ink screens that are strong enough to be buttons with RGB LEDs behind each button. Each button could be a notification to match the current red series switches and flash the programmed notification color. The firmware could have preprogrammed icons that are selected when assigning the buttons. E. G. Press button 1 2x it will display a basic lamp icon. Text could be added as well to say Floor Lamp. The button 1 backlight RGB led would then flash green to indicate the command was sent. Press the button 3x and the scene could trigger living room lights turned on and dimmed to 56% via Red Series dimmer.

Configuration is endless. Basic icons and a large amount of scene controls.

One thing is if the remote is too small, then it will be lost in couch cushion. To have a wall dimmer trigger a find me ring would be pretty sweet.

Any update on this?

Jasco finally released their remotes, but they are basically useless. Keep it simply, and do something like Insteon! 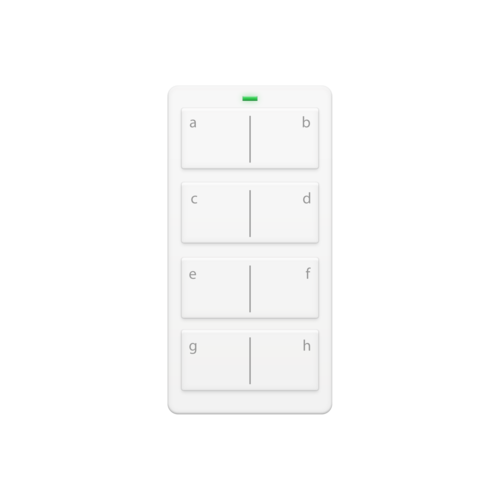 +1 on this idea too and I especially like @amdbuilder’s suggestion of the eInk displays. Even some of the new tiny OLED or LCD displays I am seeing would be amazing additions to such a device.

I have an old Leviton VRCS4 in my kitchen that I would love to replace with something like this! I even considered purchasing a cheap small laser engraver to customize the buttons as I tried even the best P-Touch/Avery/Dymo labels I could and the results looked very shabby. Years ago in an AMX/Phast/Panja install (anyone here remember those?) I had a single gang button panel with transparent tops and printed labels behind that also looked very unprofessional. Then I got something similar to the PLKDMS (this site looks like it is vintage early 90s). 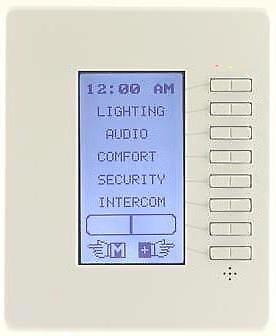 These images are just examples and not exactly what I would expect especially since a separate display area would occupy more than a single gang box of space.

Either way, I look forward to what comes of this. The Z-Wave scene controllers on the market presently offer very little and using a switch with multiple taps or holds is a poor compromise of experience.

I also should throw this into the mix… 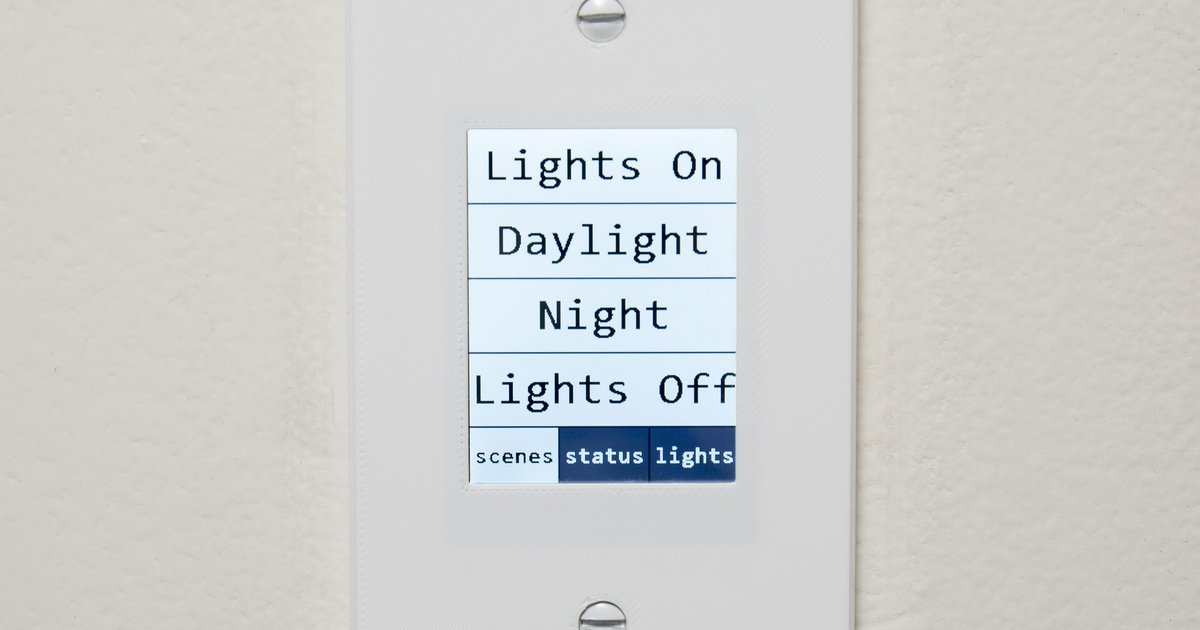 As nicely designed and functional as this device is I would not trust a non UL listed, untested, and unverified device without any safety seals in a permanent in-wall installation. That disclaimer said, the concept is strong and it associates well with this topic. I would love to see a simple version of this as I do not expect a touch display with programmable UI to be easy to program or maintain. Look through the GitHub linked from the Tindie link above for clues. Considering Hubitat as the controller, perhaps something with static settings on the device page, programmable elements using Rule Machine, and perhaps a notification “API” similar to Red series products could work well for setting the button text?

Ask for too much and it’s not gonna happen. Keep it simple

We can worry about designer engraved buttons on some (further) future product. Include a sticker sheet, or just nothing.

What if you left a small slit on side with a window where we can insert small cards with icons. Maybe even back lit. Small transparencies. you could ship with some common ones and blanks we could write on, or we can print out our own using printable versions available at any office store.

I agree on the keep it simple for a first release. There are not many good scene controllers out there.At the moment the Insteon 4 paddle scene controller seems very attractive to me…