The title could have also been: Those who like puzzles, please lend me your help!

So I’m struggling to wrap my head around how I should be installing the Blue 2-1 and Aux Whites into two 3-way setups in one of my rooms - and I really don’t want to screw it up.

To set the stage:

Here is how the wiring is all currently connected: 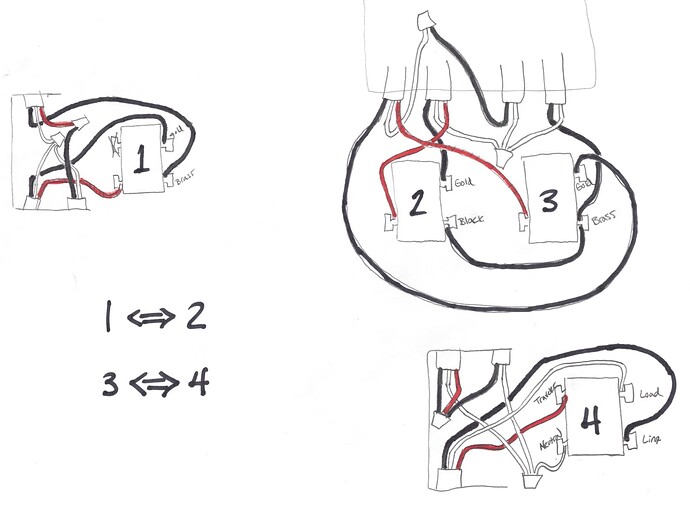 Any insight is appreciated!

Could you label which screws have COM or common next to it? Should be the Black screw, but want to double check. Right off looks like your line is in the box where switch 2 and 3 are in. We’ll need to rewire it since you want the aux switches here.

So the black screw on switch 2 says “Common”. I don’t see COM or Common near any of the other screws on the other three switches. Also, for what it’s worth, switches 1 and 3 have dimmer toggles, and switch 2 does not have a dimmer toggle. Does that help unravel things? Just let me know if there is any other info I should gather.

Does your Red series turn off if switch 3 is toggled?

Uhh, yep. So that’s a whoops, and was not my intention with the old red dimmer setup.

Good news, we’ll fix that. Basically the 14-2 on the right side of that box drawn (sw 2/3) is your line supplying power to your lights. May take a bit to draw up but this will be eas(ier).

Do you have a multimeter by chance? Basically need to confirm line is the 14-2 cable (should be, but want to verify).

Yep. Just checked with multimeter. The brass screw in switch 3 reads ~120V - both when the switch is on and off (flipped up and down). I think that makes the right-most 14-2 in the switch 2/3 box the “line,” right?

Correct; however I’m trying to figure out where you pulled the neutral from in switch 4. Can you test the 14-2 I’m switch 4 box.

Here’s what I got so far but questioning the switch 4 wiring. NOT FINAL!!! 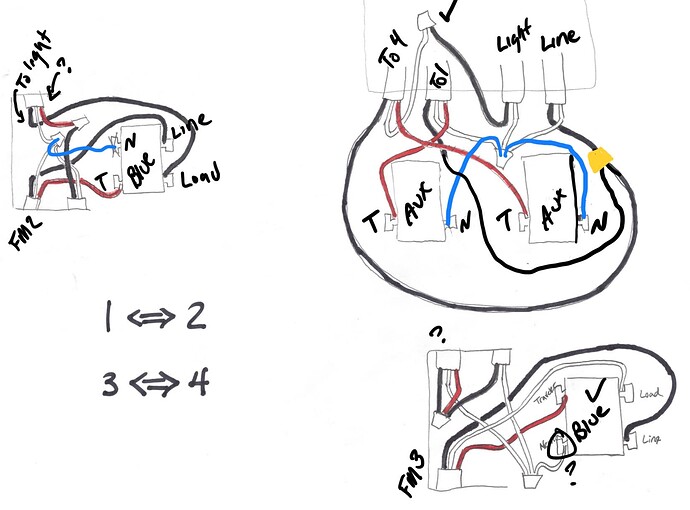 Just to confirm I’m not doing something incorrectly, do I just need to measure the voltage of that screw marked neutral in the red series dimmer, against ground? When I did that, it wasn’t reading a voltage with the red dimmer up paddled and down paddled. Or am I evaluating it wrong?

Appreciate you sticking with me on this!

Measure on the wires I drew dvm leads to. I’m wondering if you stole neutral from another circuit. I don’t know why there would be a 14-2 in this box unless it’s just passing through. 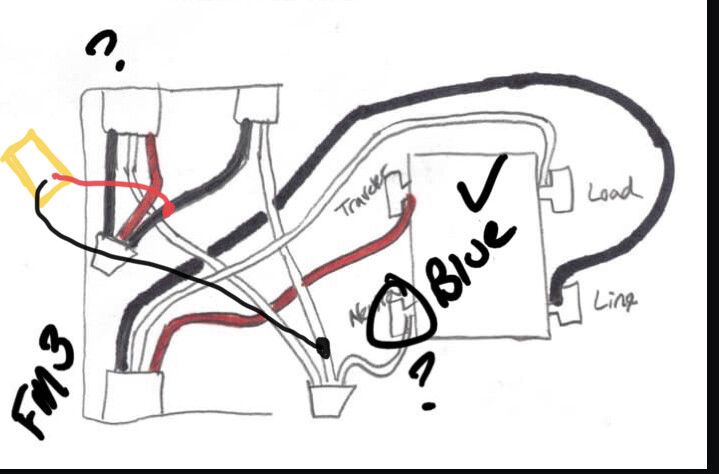 Something is maybe messed up with my existing setup. A second circuit is feeding some of the wires in switchbox 4. I had the ceiling light circuit off, and was unscrewing the caps, and I can tell that some of the wires are still “hot.” It seems to be related to an outlet recepticle nearby. I think maybe this switch used to control a floor lamp that plugged into that receptacle, and was repurposed when the ceiling lights were later added?

When I use a no-contact tester, I can tell that the white from the 14-2 is hot, and the black from the top-left 14-3 is hot. Does that help at all?

Interesting. It’s legal to have another circuit in the box so that may be the case. If that is the case, we can’t use the neutral for the 2N1 and will have to be a non neutral setup.

Non contact isn’t the best method to check. I would’ve expected the BLK from the 14-2 and BLK & RED from the upper 14-3 to be hot.

Edit: same for switch 1. Is the 14-2 hot when you open the ceiling light circuit breaker?

So when I’m doing the multimeter check your drew above, am I supposed to be using the 200 V AC setting? If so, when I do that - I don’t get a reading, but the lights flicker when the black probe touches the white wire from the 14-2. (Apologies, I’m a noob with a multimeter)

Yes if your multimeter has a knob for incremental voltages. You’ll set it to 200VAC (or sine wave ~ symbol) and should measure roughly 120VAC.

Pic of meter? Make sure your probes are connected in the V ports. 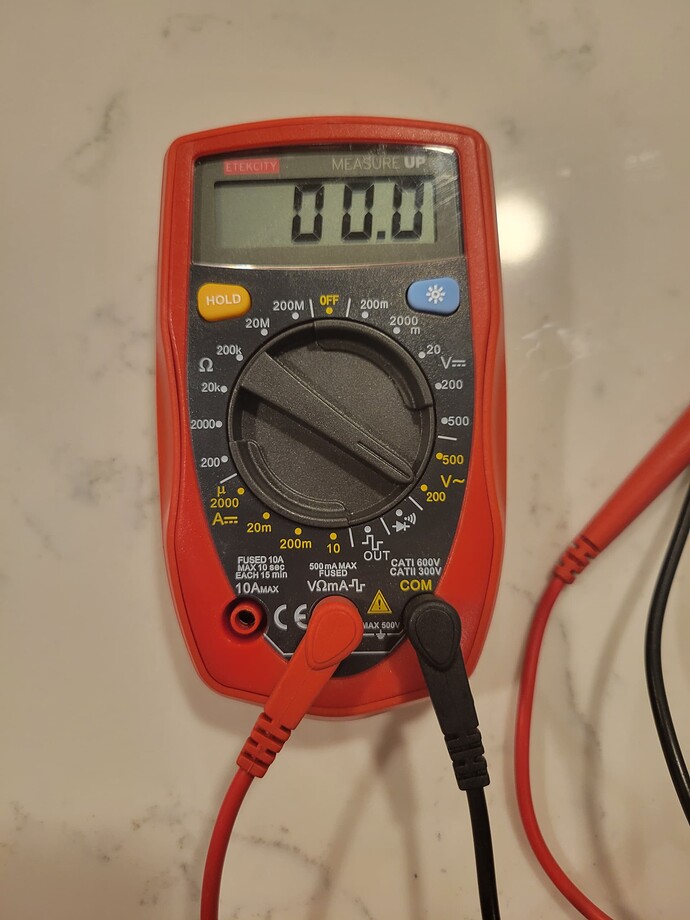 Looks right to me.

So I did some more multi meter measurements in switchbox 4 while the ceiling light circuit is off.

As expected, the 14-2 black and white both measured 0 compared to it’s ground (since the circuit is off).

But the top left 14-3 shows it’s black wire to be hot (120V measured against it’s ground). It’s white shows 0 and the red shows 0.3. Does that make any sense or help at all? I have not found what breaker switch controls that top left 14-3.

the 14-2 black and white both measured 0 compared to it’s ground (since the circuit is off).

Just to confirm, you have it disconnected from the wire nut that tied it to the 14-3 when measuring, correct?

Yep, all wires for the 14-2 and all for the top left 14-3 have been separated out of their respective wire nuts and are free-floating/not touching anything else. Should I just do the same with the bottom left 14-3, and get the red series dimmer out of the box?