I just installed my first Blue Series switch yesterday and I’m not super happy with the experience so far. Install information: single pole, with a neutral wire. After installing it and turning power back on, I could not turn the light off. I tried entering the codes for single pole and on/off, but nothing changed. I saw somewhere that pulling out the tab at the bottom of the switch can reset things. I did that and I don’t think I did anything else and it all of a sudden started working. It was fine until I tried changing it to dimmer mode today.

After putting it in dimmer mode, turning the lights on and off made the lights flicker like crazy (a separate issue that I’d like to address once I can actually use the light switch again). In the process of doing this, I apparently accidentally hit the config button one too many times which out the switch into “smart mode”. Ever since then, I cannot turn the light off again. I have tried every single config combination, going from on/off to dimmer to smart. Nothing has worked. I tried pulling out that tab again to no avail.

I’m at a loss because my light switch is now completely nonfunctional until I can figure this out, so I’m hoping someone can help me.

First of all, are you using a hub? If you are, which one. It sounds like you are trying to do the settings via the switch buttons, which is more difficult than using a hub.

If you put the switch into the Smart Bulb Mode inadvertently, then that explains why you can’t work the switch at the paddle, because that is exactly what that mode is supposed to do. I don’t think you want that.

Start by factory resetting the switch. Press and hold the config button and then while holding the config press and hold the up paddle. Wait for the LED to turn to red, then release config, then the paddle. You’ll see the switch cycle through colors and start pulsing blue. That will get you back to factory fresh and the paddle will work to operate the lights.

Post back about the hub and we’ll go from there.

I haven’t set it up in a hub yet, but I use Home Assistant. I’m having another issue where I can’t get the switch to show up when trying to pair new devices to ZHA. But I think I need to update the firmware on my Zigbee dongle, so I’m still trying to work through that.

Just so I understand the modes though, I assumed that if I wanted to be able to dim the lights, even through HA eventually, I would need to change the mode to dimmer mode. Is that not the case? I don’t really care too much about being able to dim the light from the switch, so if I can just leave it in on/off mode and dim from HA, that would be fine.

I would need to change the mode to dimmer mode. Is that not the case? I don’t really care too much about being able to dim the light from the switch, so if I can just leave it in on/off mode and dim from HA, that would be fine.

One of the HA guys should confirm, but I’m pretty sure you’ll have to ensure it’s in the dimmer mode, or all you will get is on/off, both at the switch and via remote.

I’m pretty sure you’ll have to ensure it’s in the dimmer mode, or all you will get is on/off, both at the switch and via remote.

Yup. In on/off mode the dim level is ignored. This is done at the firmware level.

Thanks for confirming. That’s a real shame because the switch is completely useless in dimmer mode and was one of the main reasons I got it

The lights flash a bunch of times when turning on/off in dimmer mode.

The lights flash a bunch of times when turning on/off in dimmer mode.

What bulb (s) are you trying to control?

Just to rule out one more thing, have you triple-checked that you have load & line wired to the correct terminals on the Blue?

I can confirm that the wires are connected to the right terminals.

So I’ve updated the firmware on my zigbee dongle but I can’t get the light switch to pair to ZHA still. I’m not 100% sure that the switch is actually going into pairing mode. I hold the config + up paddle until the light turns red, I release the config button followed by the up paddle, and then the light just goes to a solid blue instead of a pulsing blue.

@harjms or @mamber can help with things specific to Hubitat. But generally speaking, try pulling the air gap and then pushing it in to put the switch in the pairing mode.

He using HA. I have no idea about HA inclusion.

Select the ZHA integration and click on your coordinator and then “Add device to network”. Is the LED bar pulsing indicating its in pairing mode. If not maybe try a factory reset from the switch. 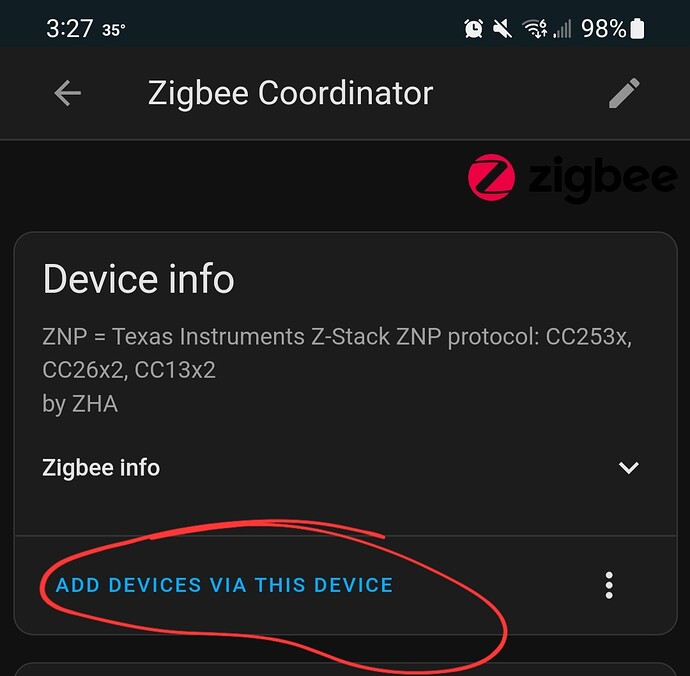 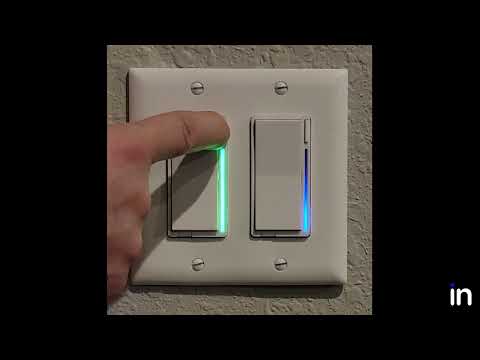 I remember seeing a thread here where it seemed like the switch wouldn’t go into pairing mode, and it turned out there was another Zigbee coordinator nearby that was automatically pairing with everything it saw.

It turns out this was the solution for my dimming issue. The wires were color coded wrong apparently. The dimmer works perfectly now! And after we lost power due to the recent winter storms, the switch went back into pairing mode when the power came back on so I was able to get it connected to HA as well!