Is the blue series dimming tech the same as the red series, or has that changed?

Considering upgrading to blue but only if they’ve fixed the steppy dimming.
Thanks

The dimming is WAY smoother on the Blue. Like a night and day difference.

I agree with the above: dimming is way smoother on the Blue Series for me — none of the “steppiness” that I saw on the Red Series (and it works better with my low-wattage loads so I don’t need to set the minimum level higher, which probably made it worse on the Reds, though this will depend on your bulbs).

I can’t answer what kind of dimmer it actually uses inside, MOSFET or TRIAC Given that it can be used in either dimmer or switch mode, the answer might be more complicated that. A search here doesn’t seem to reveal anything, either.

Sorry for the delay here – as @Bry and @BertABCD1234 mentioned, we have addressed the, “choppiness” that our Red Series experienced, however the internals are the same (MOSFET).

What caused the choppiness was more of an algorithm issue than a technology issue.

Is there any world in which a firmware update to the red series could happen to fix the dimming performance on the reds? It is definitely my biggest complaint.

I wish – we tried to get this sorted out numerous times, but every time the manufacturer said, “not enough room on the MCU”.

I’d be curious to hear more about the dimmer capabilities. Not much is mentioned in the manual.

IIRC, the red was forward-phase (leading edge) only. Can the blue do reverse-phase (trailing edge) dimming? eg, The Lutron DIVA is reverse-phase, and its LED compatibility is really good. Adaptive/universal dimming would make this a best-in-class switch.

I’ve noticed that if I use Home Assistant to set the brightness to 1 (out of 100), my LED lights are still fairly bright. I was able to dim them lower with my old switch, a Lutron Diva DVELV-300P. The switch’s Minimum Dim Level parameter is set to 1. It’d be nice if it could dim even lower–I’m guessing the electronics can do it, but the firmware is enforcing a minimum brightness where 1% doesn’t actually translate to the power being on 1% of the time?

I hooked up an oscilloscope to check out the various dimming levels (and FWIW, it’s forward phase): 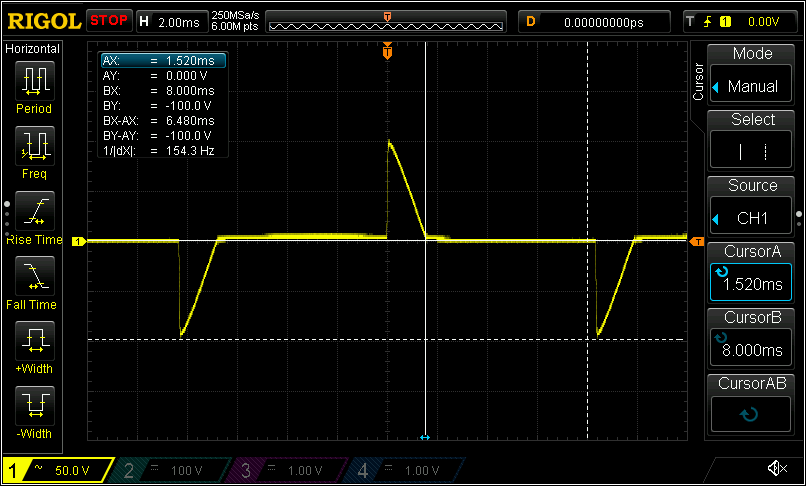 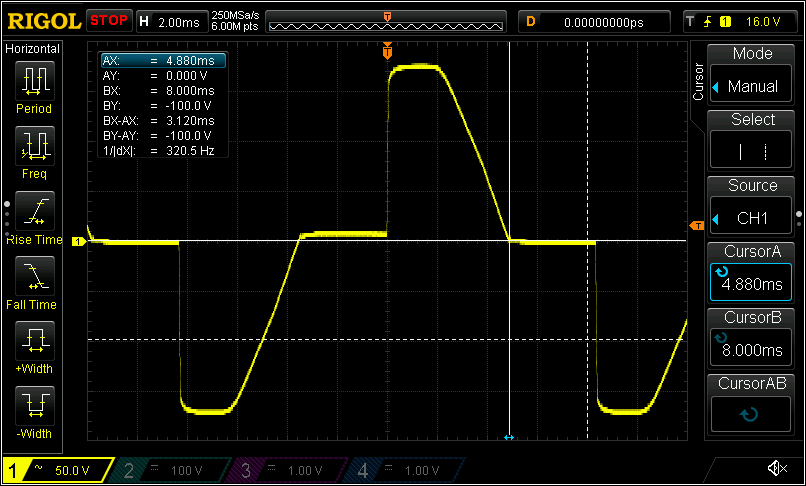 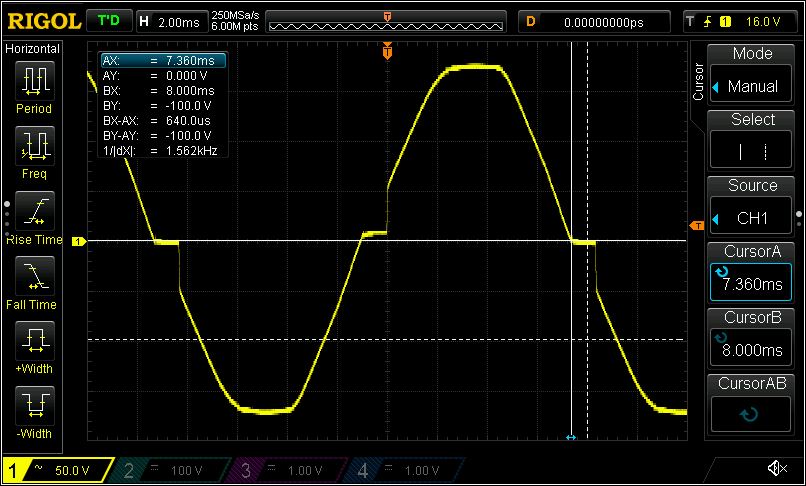 That’s similar to the Red dimmer. You can see the current waveforms into a resistive load I measured here.

Well, the current is an odd asymmetric waveform making it impossible to get the power measurement right using a meter. I’d say a quality scope or similar is the only way to measure this. This is measuring a black switch with no load connected. Off [IMG_1203] On [IMG_1204] About 0.4W when off and 1.1W when on. I was measuring the current through a 5% tolerance 1 ohm resistor by setting the scope to the 1A/V scale. So, the current signal is quite low and that makes it kind of noisy, but i…

I thought it had to do with the neutral/non-neutral capability. I believe it was said that the TRIAC wouldn’t allow for non-neutral setups. Could be wrong though.

It’s good that it’s not using a TRIAC. But since it’s using a MOSFET, why not have it do trailing edge dimming instead of leading edge?

(My lights work fine either way; I’m mainly interested in having the low end of the dimming range be even lower than it currently is. That said, trailing edge would be nice)

IT’s possible the low end dimming range of LEDs might be better with trailing edge.

Was this hooked up with a Neutral wire? I was thinking 100% would not even have that step. I wonder if you put the switch in “On/Off” mode + neutral if that step remains?

Yes, it’s with a neutral wire. I think it’s common that dimmers at full brightness aren’t actually on 100%. Both the Lutron ELV and a Lutron forward phase dimmer were the same.

I haven’t tried hooking a scope up to the switch in on/off mode, but my understanding is that if it’s using the relay, it’s going to be on 100%.

It’s possible I misunderstood this post but options in the bulleted list here (bottom of post) seem to imply it should be using the relay in single pole + dimmer + neutral:

Project Update: Received some clarity around the relay question (I’ll explain below) and we’ve closed any new firmware requests so that we can submit for ZigBee Certification (or CSA, I’m really not sure what it is). New ideas will be captured and put into a firmware upgrade in the future and the only thing we’re working on for the production run now is squashing any remaining bugs. Targeting early May for a release – hopefully pre-orders can open in April once we have an official production sc…

I’m pretty sure the relay switches the output of the MOSFET dimmer circuit between the load and traveler terminals.

If you look at a 3-wire with a dumb switch wiring diagram, the dumb switch connects the light load to either the load terminal or the traveler terminal depending on which direction it is switched. So, in the dimmer device the dimmer circuit output which is normally connected to the load terminal has to be switched to the traveler terminal. Hence, the relay is needed to do this switch.

The same thing can be done in a RED by setting it to 3-wire dumb switch mode even when it’s a 1-pole neutral wired application. The internal relay starts clicking when it’s turned on or off.

This also explains why this device can’t do a fan. The internal relay isn’t bypassing the dimmer so the dimmer would have to power the fan, which just isn’t done.

So according to that, Single Pole, Dimmer using MOSFET + Relay is an option:

I’m not clear on what that would do exactly though. And I don’t know how to configure the switch between the two modes either. I see in ZHA a “Disable relay click in on off mode” parameter, which I assume is 261 Disable Relay, “Click” Sound:

In neutral on/off setups, the default is to have a clicking sound to notify you that the relay is open or closed. You may disable this sound by creating a, “simulated” on/off where the switch only will turn onto 100 or off to 0.

But that says it’s only for on/off setups. I have that setting disabled on my switches (which is the default)–disabled the disabling, so the relay click is enabled. On the switches set up as dimmers, there’s no click. And on the on/off switches, it does click.

I guess it might be cool if at 100% brightness, the relay clicks on to bypass the MOSFET dimming and connects the line directly to load, but I have no idea if the internals are wired so that’s possible.

I have mine set up in smart bulb mode. If it didn’t bypass the dimmer wouldn’t that cause a problem with my zigbee bulbs? I guess it’s possible my bulbs could be compensating for that brief off period but idk.

No, it wouldn’t. It’s on enough to power smart bulbs.