Intro We will be working with two different apps to accomplish this. PC Controller 5.39+ for Windows and the SmartThings app for iOS or Android.  You can sign up for an account and download the latest "PC Controller" from Silicon Labs: ...

Unfortunately, I’m getting stuck at this part:

Instead of getting a pop-up window, I get a “Learn mode Replicated complete” message: 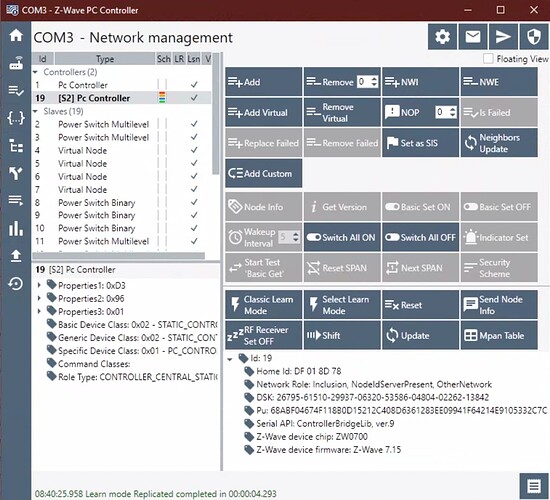 SmartThings app continues to wait, but doesn’t bring up a QR code. Eventually it times out and says “It looks like we couldn’t connect”.

I’m not sure where to start. Is there some info I could provide to help troubleshoot?

I can’t address your issue directly, but I’m going to suggest that you flash directly using the PC Controller and not use the SmartThings secondary method. From your other post, it looks like you recently installed this dimmer, so I am guessing that it is not yet added into a bunch of automations, scenes, etc.

The advantage of the secondary method, if it works, is that you don’t have to remove the device from SmartThings. The disadvantage of using the PC Controller is that you do have to remove the device from SmartThings, and then you have to re-add back into ST and reconfigure it for scenes, automations and the like. But if that switch isn’t included into anything, or very much, that is not a big deal.

I recently tried the secondary method and while I got it configured properly, the flash failed halfway through. Since others had reported the same issues previously, I put the secondary controller into the “bad idea” category (IMO) and went back to flashing by using the PC Controller alone.

Okay let me give that a shot! Thanks!

Screenshots are a bit outdated but the concept is the same. I use the Zwave.me stick.

This article is intended for users that are using a separate "Z-Stick" (Z-Wave Controller) than what they have installed in their "hub". This is sometimes necessary if your hub doesn't directly support Z-Wave OTA. For example, SmartThings. There are... 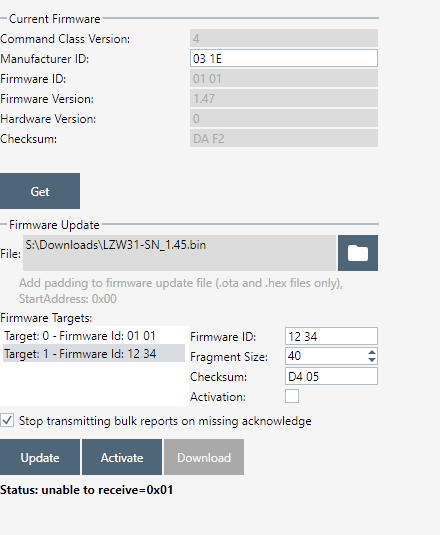 Actually now it’s happening for both. Is there a factor of time after you’ve added the switch to the controller? Does it need to be in some sort of mode (3 config clicks)?

Which version of PC Controller are you running?

Also, it’s been a while since I’ve updated, but I thought all the upper fields went white (not shaded) when the switch was 100% communicating with the software (like manufacturing ID). (Could be wrong) Press the “Get” button to refresh it. All the fields should populate.

In regards to get, here’s the video of what I do, which starts with a get
https://drive.google.com/file/d/1-0m_p1IYwGSItIEmMdVkyJ48jNny58RJ/view?usp=sharing

After the video, the operation continues for 1-2 minutes and eventually fails with this: 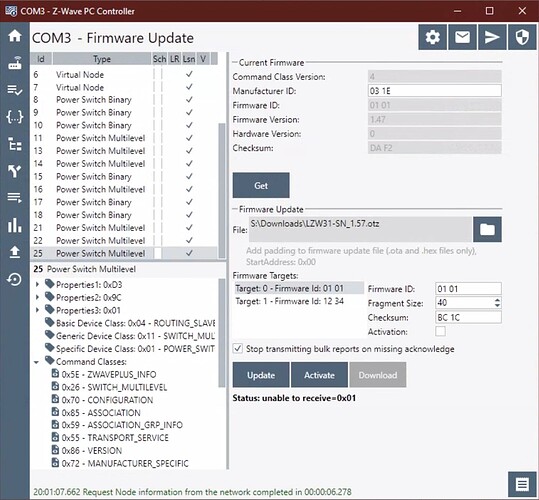 There’s an example of someone using this stick for firmware upgrades with Inovelli, but it’s a bit dated and uses an older version of Z-Wave Controller software: How to update firmware for Z-Wave devices on SmartThings

If you’re a SmartThings user and you need to update firmware on some of your Z-Wave devices, this article will explain how to do it. I ran into this exact situation recently, and I assumed I would be able to easily update the firmware through the...

I attempted to use the zooz 700 stick for my Home Assistant setup, actually 3 of them, and found them unusable with Inovelli for basic control because of duplicate messages on the network, even when using the PC controller software LZW31 Duplicate messages flooding zwave network - #24 by flipontheradio

I never updated firmware with the zooz 700 but there does seem to be some odd communication between them.

Agreed. I just finished rebuilding my zwave network yesterday using my zooz 700 and my zwave network has been the most unstable it’s been in I can’t even remember how long. I have some firmware updates to run on my end, but because of the instability I’m too nervous to personally run the update using this stick.

I’m hoping it will be able to limp along until the weekend where I’m going to give the Silicon Labs SLUSB001A a shot. A little sad no one has the US Aeotec 700 in stock, was going to go that route.

Both the Zooz 500 and 700 have given me troubles for some reason.

Just bought this (will deliver tomorrow) and will post results: 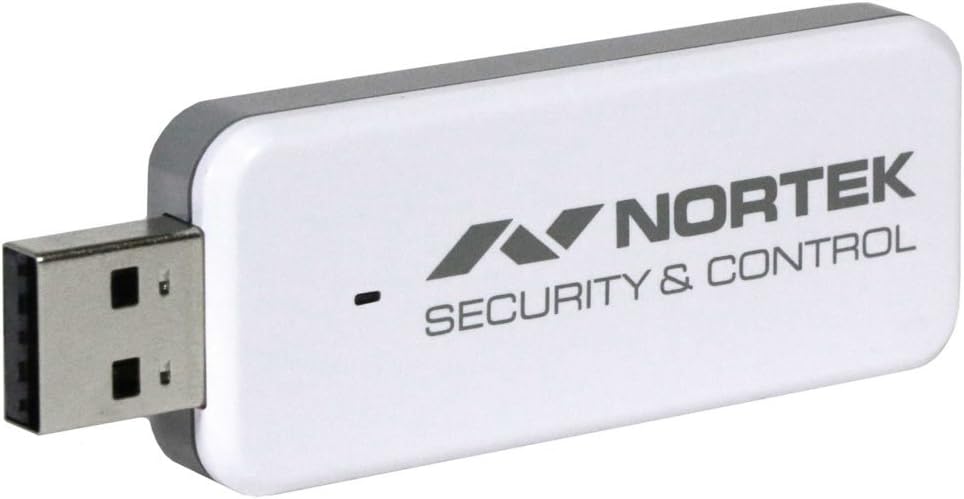 Featuring both Z-Wave and Zigbee radios, the GoControl Z-Wave/Zigbee QuickStick Combo is a USB stick that allows you to create an interface between your Z-Wave/Zigbee compatible controller/network and a third-party...

That one I can personally vouch for; it should work very well for upgrading!

This is from memory, but I think you will need to reset the adapter in PC Controller. You shouldn’t be seeing all those devices since you are now using the PC Controller in the “standalone” mode. They are left over from the aborted SmartThings integration.

I went through similar secondary controller drama recently. I was eventually able to get it working. Possibly this thread my provide some clues

So the few times I’ve updated firmware, I’ve always used the simple approach of adding my switch to my z-wave stick (Aoetec), updating, then having to exclude/include back to SmartThings. Yes, a massive pain as that process breaks all existing automations, routines, etc. So I was pleased to learn about the secondary controller method. It *seemed like I was on the right track, as I followed the instructions in the Inovelli tech notes as well as similar guidelines elsewhere. I seemed to have a…

Okay so I just tried the HUSBZB-1, followed the directions here (trying to add the controller as a secondary controller to smartthings) and am having the same problem. I’m able to get through step 3, adding the controller and providing the DSK. The smartthings app hangs on the DSK input screen, but when I look at ide.smartthings.com, I can see the controller is there. The Z-Wave Controller software seems to recognize that it has been added and has the [S2] indicator.

Then when I move to step 4, I click “Node Info” on the switch. It does NOT get the [S0] security scheme prefix like the instructions suggest. Not sure if that’s important.

When I specify the otz file and go to update Target 0, I see the following: 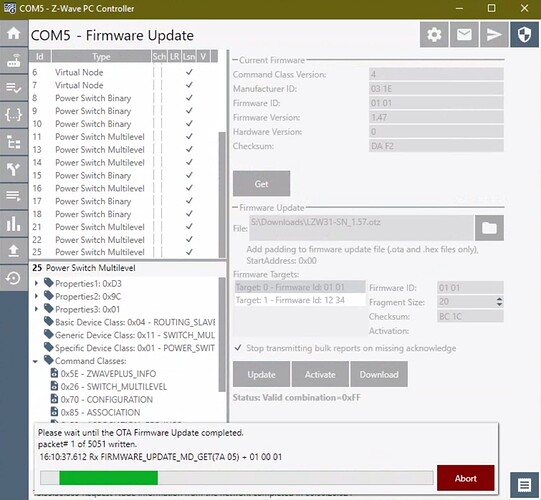 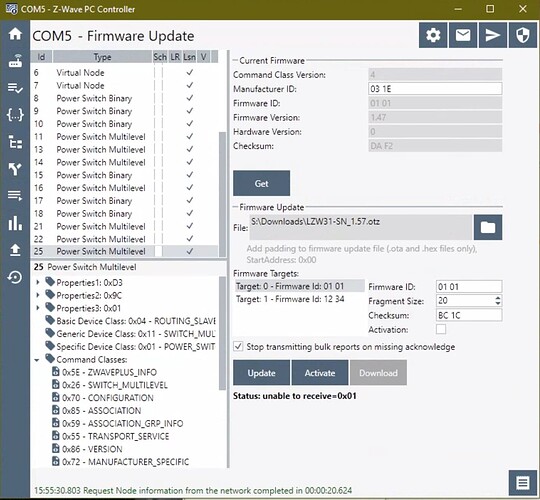 Grrr…pretty much the same as the other stick, so I’m not sure what I’m doing wrong.

Gonna try the non-smartthings way of upgrading now, but let me know if you see something stupid I’m doing.

Okay, using the exclusion method seems to be working now. otz file is processing. bin is up next. Will let you know the results!

Bin worked too. Of course now when I try to add the device to smartthings it hangs after the DSK entry. SmartThings seems to think it’s there. It’s in the app and api.smartthings, but when I try to control it through the app it says “server error occurred”. Grrr…maybe I’ll reboot the hub.