Just wondering if there is any update on getting a firmware that makes the double tap delay and hold delay on the red series on/off and dimmer configurable. No pressure. Just trying to see if it’s in progress and if by any chance, @Eric_Inovelli or @EricM_Inovelli has an update.

This is already implemented in the latest 1.48 firmware. It adds a parameter where you can disable the 700ms delay entirely so the switch reacts instantly. That of course removes multi-tap scene control capability as the switch won’t wait to see if you tap a second time. Scene control from single tap of the paddles and config button still works.

For tap and hold, you can adjust the dimming speed, Parameter 1 on the LZW31-SN.

If you want to adjust the actual delay- like change 700ms to something else, or change the delay between when you press/hold and when the dimming starts, that’s not currently configurable. Eric / EricM can advise if that’s in the works, although I don’t think it is.

If you want to adjust the actual delay- like change 700ms to something else, or change the delay between when you press/hold and when the dimming starts, that’s not currently configurable. Eric / EricM can advise if that’s in the works, although I don’t think it is.

This is what I’m asking about. There’s a bunch of us hoping the 700ms (and also, the delay in detecting a hold vs a push) could be changed to something else. That way, we can still use double and triple tap but have less of a delay in getting a response from a tap. Eric/EricM have confirmed it’d be worked on at some point so just checking in.

Ah, that’s cool. I didn’t know that was in the works

Wonder if it could detect the config button held while taps are happening on the paddle? Then the paddle could be on/off instantly unless the config is held (for less than 10 seconds or you’ll be in config mode) in which case it will be setting the scene. Maybe that’s getting too complex? Just throwing that out there and it probably has been already I’m the new kid on the block here.

Just adding support for the hold delay adjustment. With the tap delay disabled, it would be great to have a hold delay next to nothing (dimmer speed is great once it’s going and I have mine set to 1)

I was searching in google for that option. That would be great to change the 700ms to anything between 1-700 ! It would be wonderful. 700ms is too slow.

What is the setting in smart things for this?

I’m sick of the delay when I tap the paddle. 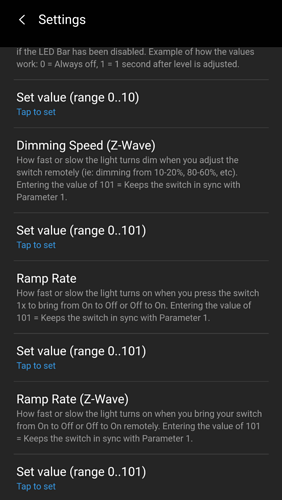