Has anyone had success updating firmware using HomeSeer’s Z-flash software?

I am able to use Z-Wave PC Controller software to update individual devices. But, I wanted to use Z-flash to update multiple devices without removing them from the network.

For the moment I’m stuck. I’ve connected my stick to ST as a secondary controller. The Z-flash software initializes the stick, but none of the Z-Wave devices show up in the “Step 2 Device Management” box.

I have used the Z-Flash software with some my other devices, but gave up on it for the Inovelli, not be cause it didn’t work, but because it didn’t seem to have a way to support the second flash location for the Dimmer MCU

Attached is a Red Series Switch being updated, but I was forced to rename the provided .otz file to a .hex. 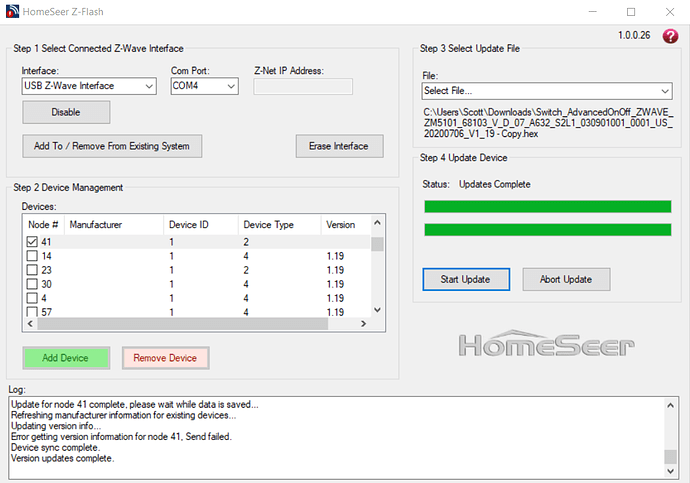 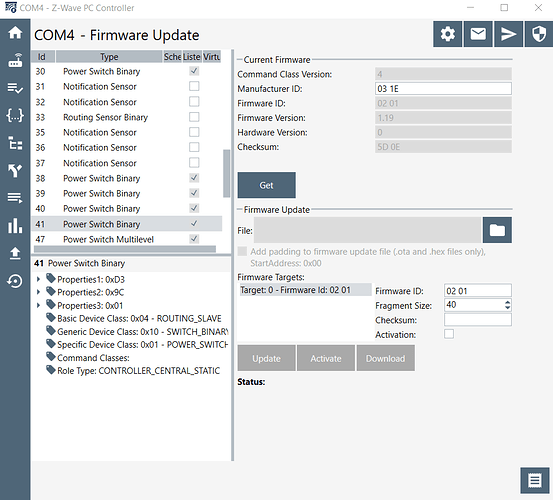 Thanks for your response. It’s good to know that it CAN be done!

However, when I connect as a secondary controller, I don’t get any of the current firmware information and the file icon is not clickable. Any thoughts on why? (I am using the Zooz S2 stick if that makes any difference) 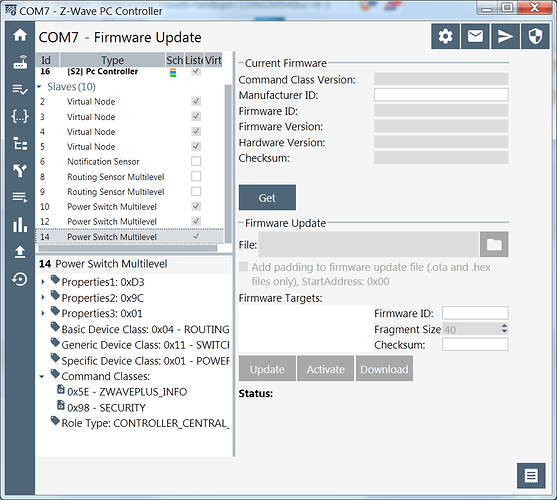 Looks like you may need to go back to network management and get the node info, first with primary controller, then the node you want to update. That should complete the security handshakes and then Get should work for you.

Found this in another post, I don’t have S0 configured on my install but I suspect you may…

The second option is to include the Z-stick into your SmartThings network as a secondary controller. You put the SmartThings hub into inclusion mode and click on the “Learn” icon in the PC Controller Software. This should obtain the S0 security key that will be needed to update the switch

Yes I have S0 configured, mostly for associations with bulbs.

Looks like your PC controller is S2, which I’ve not gotten to work. I have all of my switches and pc controller as S0.

Thanks for all the responses. You guys are awesome.

I guess the next step is to figure out how to switch the controller to S0? I’m sure I can figure that out on my own, but for now I have to get back to work. I’ll work on that tonight.

I am working on an article for the secondary controller method that may help you out. It should work even when the device is included with S0 or S2.

Pefect!
This was exactly what I needed. Thanks everyone for all your help!