I’m guessing this will also work with Hubitat C7 users? Should we expect any visual confirmation of secure vs non-secure pairing?

Personally, I would prefer secure pairing to be the three toggle and default to non-secure. Granted that’s being nitpicky, I will just be glad to have an option.

No visual indicator at this time, but yes, it will work with Hubitat.

@EricM_Inovelli Awesome. That will make things easier in ST. I did manage to pair a bulb unsecure over the weekend. I’ll try to do it again in a video. I initiated the normal pair process but after the double blink I quickly removed and then applied power.

I did notice the bulb does “flicker” once when you turn it on if unpaired. This same behavior was noticed when attempting the insecure method. So it’s possible my timings are off, or something else. I attempted the process a few times with no success.

Any additional guidance you can offer would be appreciated.

Here is a video of my timing for reference: https://photos.app.goo.gl/s5oUyrwBsTMmTwcw7

Are you sure the bulb has been excluded? Turning it off and then on is still the way to put it into exclusion mode (3x off/on does not put it in exclusion mode, only non-secure inclusion mode).

I updated a bulb with Hubitat and it’s still reporting 2.28… I also updated the same bulb to 2.30 a few weeks ago and didn’t realize it was still indicating 2.28 until going to do this update. Is this normal??

After you switch the driver back you need to press configure then refresh to see the firmware version update, sometimes it takes a couple presses of configure.

Tried that a bunch of times. Also tried switching back to the firmware updater driver and tapping get version report. It always just shows 2.28. I don’t get it.

Ok I’m getting really frustrated here. I took a bulb, disconnected all other Zwave devices from power, excluded the bulb, included it, applied the firmware update. I did this two times. The version still reports as 2.28. I tried several times to do the unsecure inclusion anyway… I see the bulb blink twice but Hubitat never finds it. As soon as I put the bulb back in normal inclusion mode, the hub finds it immediately and includes it at S0 no problem.

If it’s any consolation, I’m experiencing the exact same issues.

I didn’t realize it until today when I saw this thread. I spent the last week or so updating the bulbs. I saw them blink to confirm they finished and just noticed they all still say 2.28. I have 10+ of them that all say the same thing.

Yessir. Honestly the firmware version reporting is annoying but not a killer since it’s expected at this point. The killer is that I can’t get the unsecure pairing to work.

Yeah, I’m more curious now if it’s a reporting issue or if the firmware isn’t taking. I was waiting until this weekend to try the unsecured inclusion. I guess we’ll see!

Since this thread doesn’t appear to be hub specific, I do see the firmware version reporting correctly as 2.31 using ZWaveJS in HomeAssistant. I no longer have any bulbs on 2.30, but I can report prior to upgrading yesterday they reported correctly as 2.30. 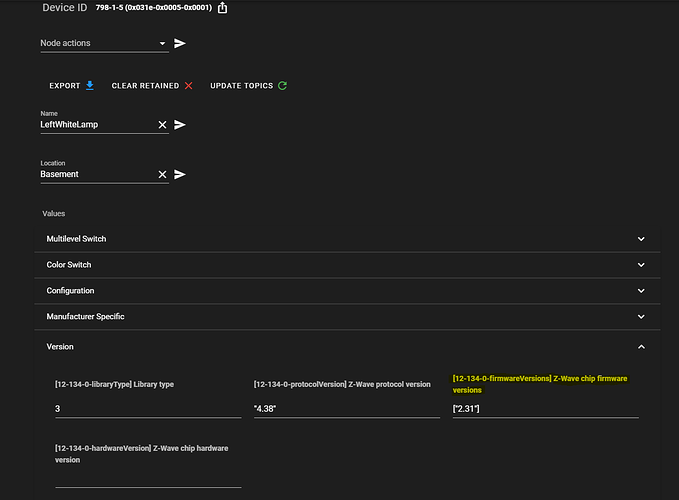 or if the firmware isn’t taking

I suspect the firmware is at least partially working…when I do the off/on*3 process I see the bulb blink twice, but then Hubitat refuses to see it. If I do off/on one more time (so it’s in “normal” inclusion mode) then Hubitat sees it right away and includes it at S0.

Hmmm… ok, I’ll play around with it this weekend too. Out of curiosity, did you follow @EricM_Inovelli’s cadence here: https://photos.app.goo.gl/s5oUyrwBsTMmTwcw7?

I haven’t had a chance to test, but I’ll follow up when I do.

I updated mine to 2.30 a while back on a C-3 and they report correctly. 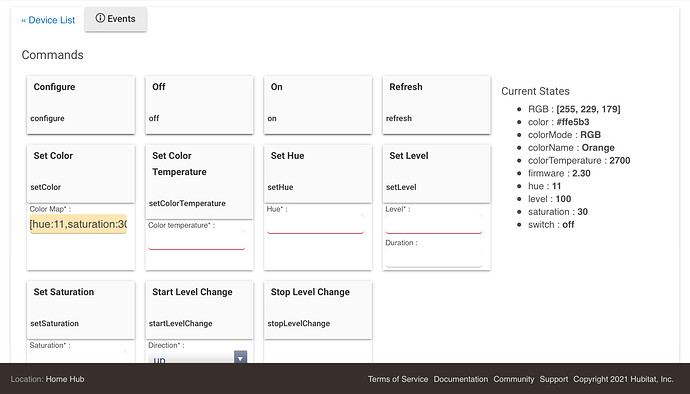 Out of curiosity, did you follow @EricM_Inovelli’s cadence here

Tried to best I could, and I assume it worked since it does behave differently when I do it (differently as in Hubitat acts like it isn’t there).

Yessir. Honestly the firmware version reporting is annoying but not a killer since it’s expected at this point. The killer is that I can’t get the unsecure pairing to work.

Using the 2.30 firmware I manged to get it to pair insecure a week ago with ST. I still owe @Eric_Inovelli a video. Start pairing and when it flashes immediately cycle the bulb off and back on. I only tried it once so I’m not sure how repeatable it is. I’ll try do get a video this weekend.

Thanks all for confirming

Can anyone who has a C7 confirm?

I just removed the bulb and paired it to a Z-Stick and PC Controller and it’s also reporting 2.28.

I’m going to upgrade this way and see if it works on Hubitat.

Edit: I managed to update to 2.31 and after a couple of tries, get it to pair with no security to the C7. I’m confident the cadence was the same each time during inclusion, but somehow in the third try it worked. I still am not sure why the update didn’t stick when using the updater on Hubitat.