How to change Security Level of Red Dimmer, V2, LZW31-SN - Cause of Association Problem?

I’m trying to do an association on group 2 between 2 Red Dimmers (“RD”) to create a 3 way situation with the Z Wave Association Tool in Hubitat. I have a C-7 hub. The switches are wired per the Inovelli diagram for line and load in different boxes. I think the problem might be that I brought them into Hubitat with different security levels. I think I did the Hall side one at 0 because I want to install an RGBW bulb once the Inovelli’s get back in stock, but may have brought the 2nd (Den side) one in at S2 as I just blew past that screen. Is there any way to change the security level without excluding the switch and then re-including it? Would different security levels cause the association to not work?

I’m attaching screen shots of the details of both. In one you can see the Den Side says S2: 128 while the other one (Hall side) doesn’t have anything like that. I’ve also attached the association. The Hall side is the line side so I made that the source and the Den side with the load the Destination. I’ve also attached a screen shot of the association.

A final thought is that I also have 2 rule machine rules for the Den Side. 1 rule to turn on the light to 40% via the config/favorite button and another to turn it to 100% when pushing the 1 button. (I’m not clear on why I need to create the 100% rule, but that is another story). Could that be causing the association problem?

One other thing: I was able to create a Rule Machine rule for the Hall switch as a button device that 1 pushed turns on the Den switch and 1 held turns off the Den switch. That works, but with a noticeable lag (that already caused the family to complain about). In Hubitat I set the Dim and Ramp Speeds to 0, 3, 0, 0 for the Hall side switch and 0, 3, 1, 1 for the Den side switch.

Den Side Light. Has the Load. Destination for Association. 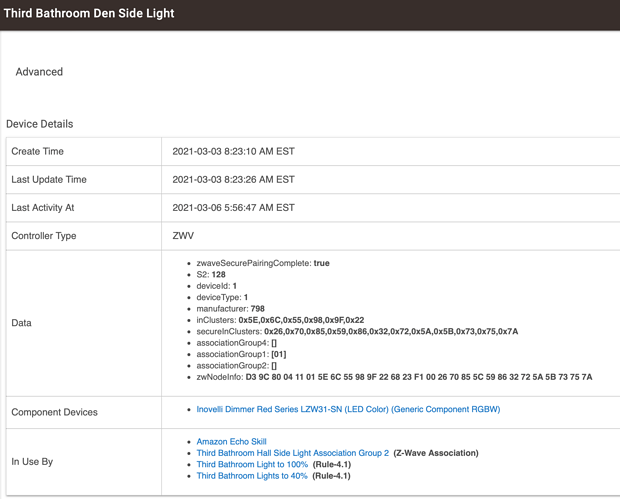 Hall Side Light. Line only. Source for Association: 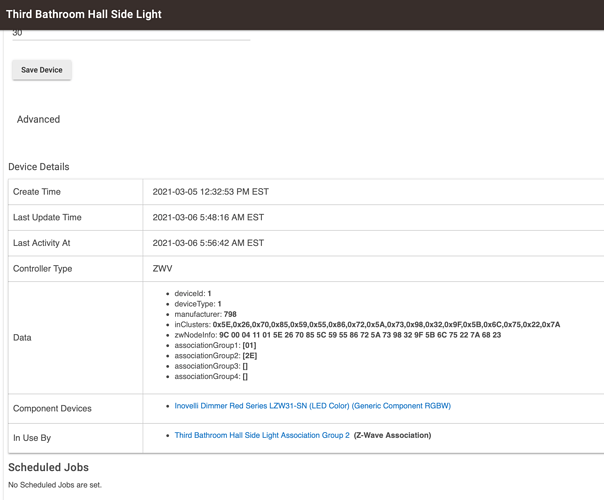 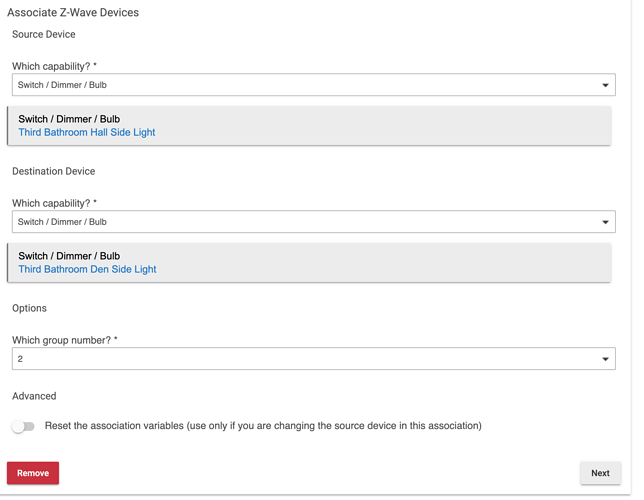 Hey @skarden - as luck would have it, I was messing around with Associations last night and learned how to tell the difference between secure and non-secure inclusion after the fact.

Looking at your screenshot, it does appear that they are paired with two separate security levels. The top one is paired securely and the bottom one is not.

If you notice on the top one, it says, “zwavesecurepairingcomplete: true” whereas the bottom one does not have this.

The only way to change levels is to unpair and then repair the devices.

Hmmmm. I went into the device in Hubitat and told it to remove it. It then came up saying it needed to forcibly remove, which I accepted. When it was gone and I removed all the rules it was attached to I re-paired it. It took 2 times to find it, but when it did it skipped right to the part where I named it. When I went into the device it still had S2:128.

So then I went to Hubitat’s Discover Devices, Z Wave Devices and excluded it that way. When I then did the include again it did come up with the screen asking me to pick the security level. I picked 0, unsecured. and made sure the others were not checked When it went to the next screen that usually asks me for the DSK it was already filled in. So I moved on and got to the 3rd and final screen where it asked me to name it.

I then went into Devices and went into the device, but it is still showing up as S2:128. Since I want to put an RGBW bulb in there I think I need to be at zero security. So I don’t know how to truly purge it from the system to get it to accept my security setting. Since this seems to be a Hubitat issue I’ll post it there too.

I picked 0, unsecured. and made sure the others were not checked When it went to the next screen that usually asks me for the DSK it was already filled in. So I moved on and got to the 3rd and final screen where it asked me to name it.

To be clear here – you selected S0 or you selected zero entries (ie: unchecked everything so that nothing is checked)?

Since I want to put an RGBW bulb in there I think I need to be at zero security. So I don’t know how to truly purge it from the system to get it to accept my security setting.

Let’s do it a different way as we just released 2.31 for the bulbs and you can actually pair both the switch and bulb without security and it’s lightning fast.

I just created this last night (3 smart bulbs associated with a dimmer): 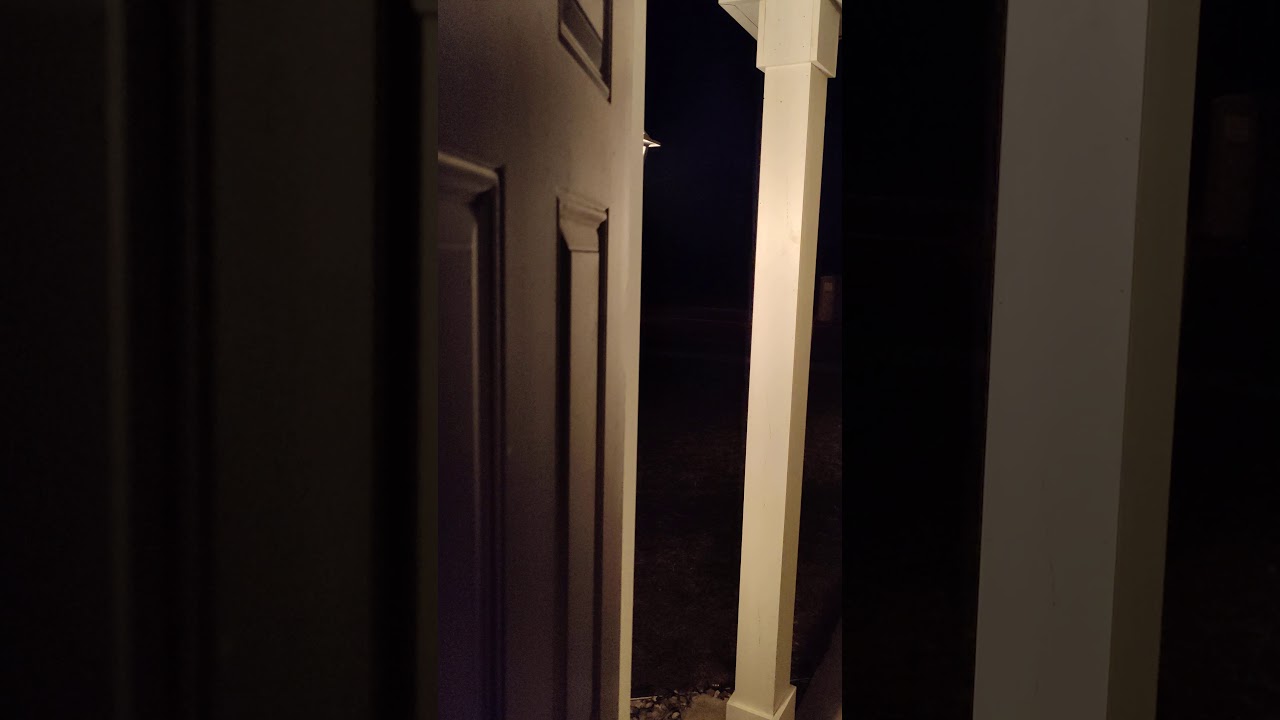 If you’d like to try updating the firmware to 2.31 via Hubitat, try these directions:

How To: Update your Dimmer Switch Firmware | Hubitat

Please proceed at your own risk. Bricked switches due to user error will not be replaced nor refunded. If you'd like to mail in your switch to have us do it for you, we're happy to do so. Updating the firmware is a fairly safe & fool proof...

There’s also a newer way if you’d like to try it (go to, “Apps” and then, “Add Built In App” (or something like that) and select, “Firmware updater” and follow the prompts.

Once you update to 2.31 on the bulb, you can pair the bulb with no security following these directions:

Here is a video of my timing for reference: https://photos.app.goo.gl/s5oUyrwBsTMmTwcw7 Are you sure the bulb has been excluded? Turning it off and then on is still the way to put it into exclusion mode (3x off/on does not put it in exclusion mode, only non-secure inclusion mode).

Then remove the switch and make sure no security checkboxes are checked in the pairing process.

I know that’s a lot, but it’ll be worth it having both at no security.

I’m going to be out most of the day today (Princess Day with my daughters), but I should be available tonight if you can’t get it going!

This is what I picked. Isn’t this setting security level to 0 Unauthenticated (which is what I thought smart bulbs needed)? 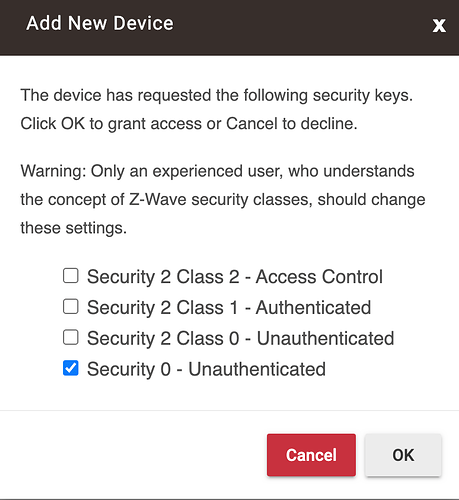 Or should I have used the one above, Security 2 Class 0?

I believe what @Eric_Inovelli is suggesting is no security, which means to uncheck all the boxes.

Despite what this post says, using no security is often recommended to have quick response and low congestion on your Z-Wave network.

What finally worked was excluding the load switch (that I had originally paired with S2) and then unchecked all the security boxes when I re-included it. Once I did that the associations worked.

*For the LED sync in Hubitat I reversed the association so the switch with the load is the Source and the one with just the line is the Destination using Group 3. The reason I’m not sure the sync is working 100% of the time may be due to some lag between dimming and it getting reported. e.g. If I dim the “Master” it has to send that to the “Slave” which then has to lower its LED and send that back to the Master.

In any event, I entered those settings for the Destination (switch with the load) in Hubitat. Since the other switch is associated with it, do I need enter those settings in the source (line only) switch? That is, are whatever the settings are in the Source switch just ignored due to the association so I don’t have to set them too?

You’ll want to set the dim/ramp settings the same on both switches. They don’t have to be the same for operation since the line-only switch just sends zwave commands to the load switch (on, off, start dimming, end dimming) and the load switch does the dimming itself, but it’ll help keep the dimmer bars in sync while they’re being dimmed.

e.g. If I dim the “Master” it has to send that to the “Slave” which then has to lower its LED and send that back to the Master.

Load should ALWAYS be master if possible. I think you’ve nailed it.