How to set Association for Red Dimmer to turn On/Off Red Series Fan/Light?

I have a Red dimmer, V2, LZW31-SN, (“RD”), that I’m trying to use to turn the light on/off for a Red Series Fan + Light, LZW36 (“FL”). I used the Z Wave Association Tool in Hubitat to set up the association with the RD as the source and the FL as the destination on Group 2. When that didn’t work I created a new an association with the FL as the Source and the RD as the destination on Group 3. It is still not working. I made sure they are at the same security level. (See screenshots below).

Can someone please tell me what I’m doing wrong and how to get the association to work?

Here are screen shots from Hubitat of the details of each device and the 2 associations. 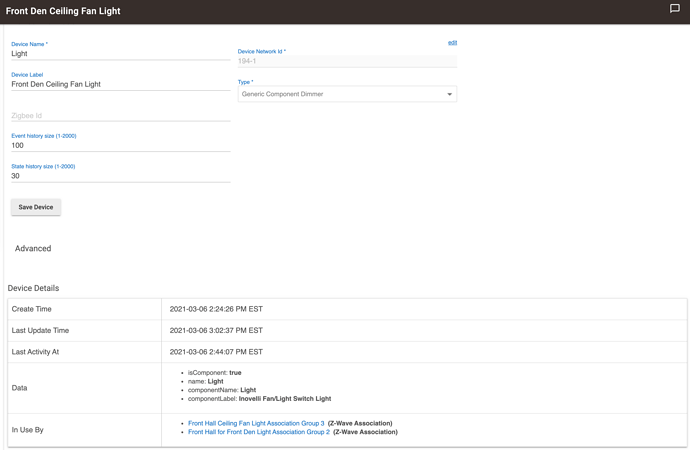 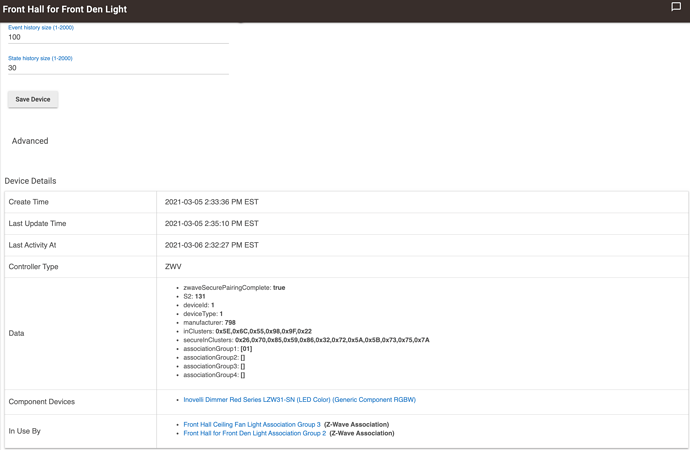 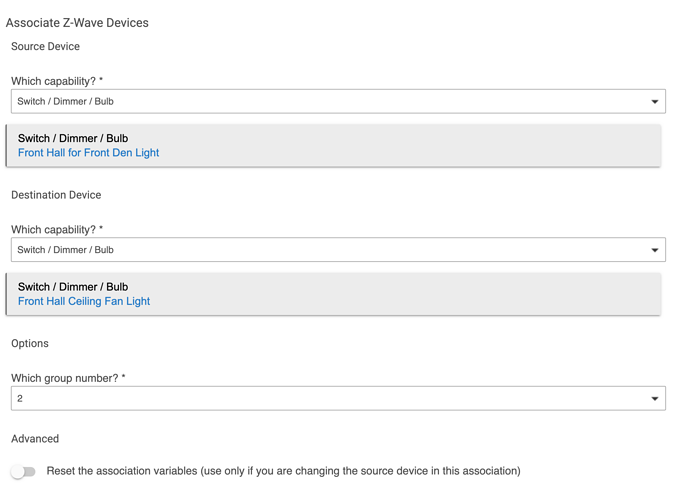 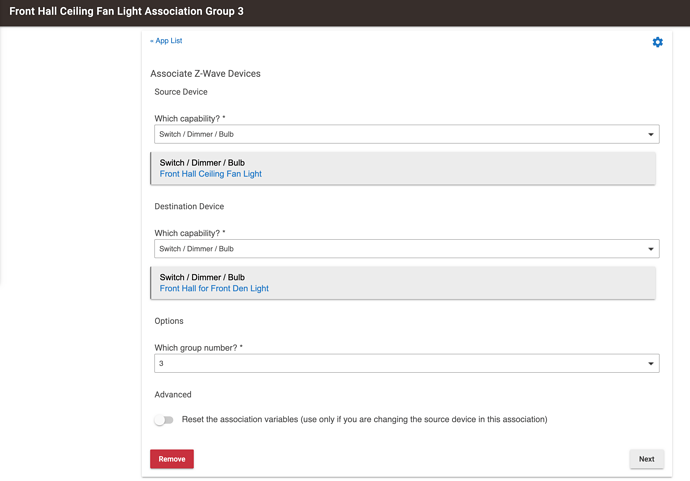 You really should be using the driver by Inovelli vs. Generic Component Dimmer.

The security level between the two may be causing the issues.

I’ve never really understood how to change drivers. Is that the “type” in the Device Information section? When I did the Include the Fan + Light parent device came in as an Inovelli Fan/Light Switch.

When I go into the Light Child device I cannot change the type. Clicking the drop down does nothing. Was there some driver for this I should have installed? I have the Red Dimmer driver installed, but I haven’t seen anything anywhere about installing a driver for the Red Series Fan/Light. I figured it was being configured properly as the Parent is showing up as an Inovelli Fan + Light and not just some generic device.

For dimmer with scene:

Import these links to your drivers page in Hubitat. Once saved, go to the device and select the new driver (hint:it’ll be towards the bottom of the list). Save Preferences.

Ah. I found the device driver and installed it. I went back to the Fan/Light parent but there was no new choice. (May be as I was only looking under Inovelli and it appears it may have been under Hampton Bay). I then went into the child device for the light but the Type dropdown was still disabled.

So then I did an exclusion/inclusion. This time the parent and children devices say they are Inovelli LZW36’s. BTW, I assume it is correct that the type is actually a Hampton Bay Fan Component as there was no LZW36 under type and that is what it set itself as. The child light came in as a generic light even though the label was for an Inovelli LZW36, so I changed that type to a Hampton Bay Light Component. Was that the correct thing to do?

I then set a new association with the Front Hall switch as the source and the Front Den Ceiling Fan Light as the destination on Group 2, but it still isn’t working.

So I tried going into Rule Machine again (after deleting the association). I created one to set the Front Den Ceiling Fan Light to 100% when 1 was pushed and a second rule to turn off the Front Den Ceiling Fan Light when button 1 was held … And I got some strange results. I had the Den light on and trying to turn it off from the RD in the front hall didn’t work. So, I turned off the ceiling fan light at the light itself. (So both the fan and light were off). I then went back to the hall then pushed the Red dimmer to turn on the light and it came on - but so did the fan. So 1/2 a step closer?

Any ideas why the association still isn’t working and why the fan and light came on when I’m sure I just picked the child light for the Rule Machine rule?

A similar discussion is found here:

How to change Security Level of Red Dimmer, V2, LZW31-SN - Cause of Association Problem? Hubitat - Ask the Community

I believe what @Eric_Inovelli is suggesting is no security, which means to uncheck all the boxes. Despite what this post says, using no security is often recommended to have quick response and low congestion on your Z-Wave network.

So, I turned off the ceiling fan light at the light itself. (So both the fan and light were off). I then went back to the hall then pushed the Red dimmer to turn on the light and it came on - but so did the fan. So 1/2 a step closer?

There is a similar discussion about using a LZW31 to control the light on a LZW36 found here:

Hi there - Starting to look at phasing out insteon in my home and moving fully to zwave. So this fan switch and radio is perfect. However, the master bedroom is a three way switch (two swtiches). Is this setup supported? How would you go about it? Thanks David

Also the LZW36 has different numbers for the associations, I think it gets up to 7. Just posting to confirm you are using the right parameters for what you are trying to control!

First: Thanks for the info on the fan/light differences. I’ll have to study that to get it all figured out.

As to your question I’m a total noob but I think that is very doable with Red Dimmers for the 3 way, particularly if you have neutral wires and all Inovelli switches. (Are you saying there is a 3 way in that room besides the fan/light or you have a 3 way for the fan and light?)

I found out the exact way they get wired depends on if the line from the main is in the same or the other box as the load, but they have diagrams for that. Basically, they do away with the traveler wires and then you do an association from the one without the load (what Hubitat calls the Source) going to the one with the load (what Hubitat calls the Destination) for Groups 2 (On/Off) and 4 (Dimming Up/Down - assuming, of course, that the bulbs are dimmable). In Hubitat that requires two associations - you can’t set both at once with the Hubitat Association Tool. To sync the LED indicator you do one more association, but this time the Source is the one with the load and the Destination is the other one (so just the opposite of Groups 2 and 4). That association is Group 3.

Although both the Fan/Light and the Red Dimmer were at S2, I thought that the problem might have been that the child device for the fan’s light was no security. So I went back and did an exclude on the Front Hall switch and then an include with no security. BTW, when it did the include it already knew the DSK. Also, this time I did have the Inovelli driver for the Front Hall switch. I then tried to do an Association on Group 2 and 4 (one at a time, not both at the same time). I tried both of those with Disabling the Physical Switch both on and off. Neither one worked.

So then I thought that it wasn’t the security level but the fact I wasn’t using the Inovelli driver the first time. I then did another exclude/include round. (And BTW, this time the include did ask for the DSK). ( then tried doing an association on Group 2 and Group 4 one at a time as set forth above, but neither or those worked either.

So I still can’t figure out how to associate a Red Dimmer, LZW31-SN with just the light for an LZW36 fan/light.

One final note: The reason I’m trying so hard to get the associations working is that I tried setting up Rule Machine rules like I did a number of other times where I have the Button 1 Push turn the light on to 100%, Button 1 Held just turn the light off and a Button 7 Push turn the light to 35%. While most of those rules control lights physically attached to their switch, that is not always the case. It is this one, and only this one, that is giving me strange results that sometimes turning the light off from this switch just doesn’t work. I have to turn it off from the LZW36 button then turn it on/off from that or the Red Dimmer until it starts working again. This is the only switch giving me this kind of problem.

Did you confirm the association groups for the LZW36? They are different than the LZW31-SN. Perhaps the light groups are the same, but I’m not sure.

I never found out as no one ever responded to me. I tried 2 and 4, but I was just guessing at that.

If you teach a man to fish…

I am one of those who believe literacy is a gift and actually RTFM. I had seen this in the manual re: groups: 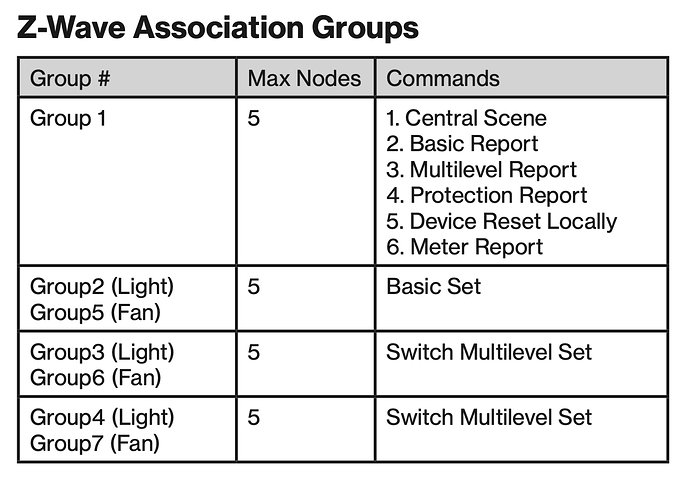 That implied to me that the light was the same as any other Red Series. However, recently I found out in doing a 3 way with 2 Red Dimmers (“RD” )the way to do it was actually use just Groups 3 and 4 (without 2) in both directions and set Param 12 to 11 on both. This was contrary to much, if not all, I had read before, including the Wiki. Plus, I had seen people talk about errors in the printed manual and even in some posts regarding parameters and groups. I had also seen numerous posts that the group numbers were possibly different for the Fan/Light (“FL”) than the RDs. As a final matter I had already tried doing an association from the RD on Group 2, and when that didn’t work, removed 2 and tried an association on Group 4, which didn’t work either.

So, with all due respects to Lao Tzu, that was/is not the problem I’m having in trying to do an association between my RD and the FL.

I just heard from EricM over on this thread that they can’t do an association between the Fan’s Child Light and a Red dimmer: