I have a thruway switch (one dumb, one LZW31-SN) It has been working perfectly for a while. as of two days ago, it now does not dim, or turn the light on or off. the LED strip shows the correct brightness, and when you toggle the switch off, the light turn off for a split second then they turn back on. but the switch stays off.

I have looked at the wiring. and when the load wire is disconnected, it does not have power. the wiring is correct for the line and light in different boxes.

Could this be a setting( my toddler pushes a lot of buttons and has disabled the relay once before? or is the switch busted?

I have looked at the wiring. and when the load wire is disconnected, it does not have power.

Your subject says the load has constant power but the narrative says it doesn’t. So you need to clarify which it is. A disconnected-from-the-switch load wire should not have power, so if that’s the case, there is a wiring issue.

In any event, if the switch was working properly for some time, and if you didn’t make any wiring changes to the dimmer or anything close to it, odds are it’s not the wiring. So it could be a setting or it could be an issue with the switch. I would try a factory reset to rule out any settings issues. Long press config until you get a red LED.

Sorry if it was confusing. The load terminal and thus the wire has constant power. To make sure that it wasn’t some random line with power I disconnected the load. And made sure that there was no power. I figured it wouldn’t, but I wanted to confirm that the power was coming from the load terminal on the switch.

I tried an reset and I still have the issue. I am assuming at this point the switch is busted. This was my first switch installed so let’s hope the others last longer than this one.

I just made sure that parameter 22 is set for a 3way dumb switch using zwaveJS to MQTT (home assistant). And also tried this directly on the switch (config mode, 13 config button clicks, up one then save).

I might be really backwards on something but I thought that the power on the load is what turn the light on and off?

Either way the dumb switch is the only thing that works. It turns the light on and off no matter what position the smart switch is, could be on, off or 50%brightness and it changes nothing.

As you can tell I am not an electrician by any means….

Sounds like Smart Bulb mode is enabled (Parameter 52). This setting, when enabled, keeps power to the load terminal at all times.

When you say you “tried a reset” do you mean just a power-cycle/reboot, or did you do a full Factory Reset? To do a full factory reset you need to hold down the config button for over 20 seconds. While holding down, the LED bar will first turn green, keep holding longer it will turn yellow, keep holding even longer and it will turn red. Then you can release and it will indicate completion with a quick flash of red-green-blue

Dumb 3-way is different, the load terminal is used as one of the traveler wires. You should be hearing a relay click inside the dimmer when you turn it off or when it turns back on.

Personally, I would try it in single pole mode or try replacing the dumb switch.

I tried this in a single pole switch and it still had the same thing. the power is constant to the load. The bulbs also flicker with this on. I would have assumed if the switch failed it would not turn the light on anymore, not be able to turn the light off.

but I got it switched out. the biggest down side it that ws my only Red series and I used the LED no for notifications… I will have to do something else for that now.

What firmware version you running? 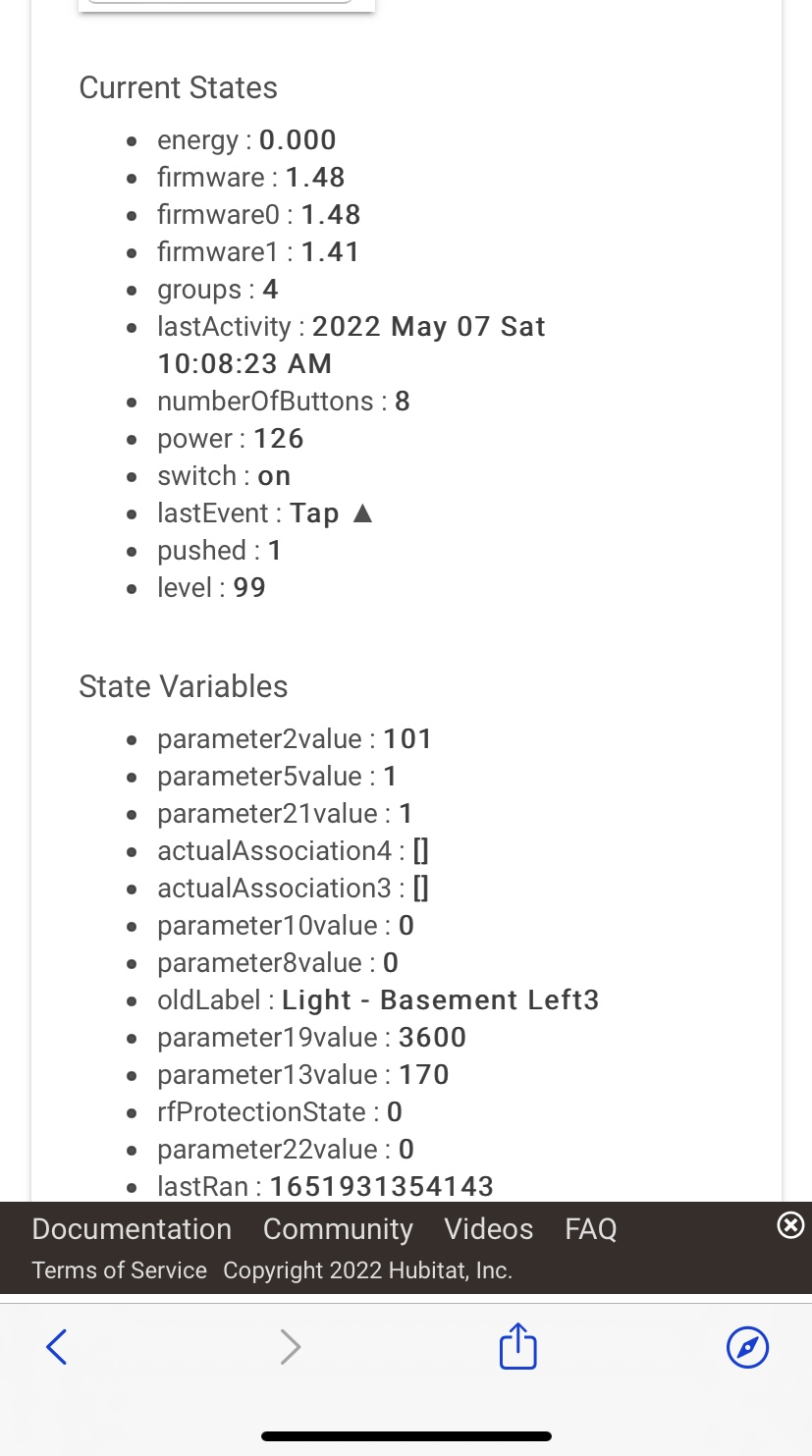 There are three parms. Disabled, on/off only, and smart bulb. What’s weird is that on/off only AND smart bulb show current state as 1, even after refreshing. But I assume you mean the smart bulb parm, and I have tried that along with the other two. No luck.

I’m starting to think it may be the led bulb type or the wattage.

Interesting. I just looked at the driver. Should be 2 (support website showed 1)

I assume you save preferences after setting to the correct parameter. You have the latest driver correct?

But it looks like it won’t save a value 2. Either method: up top in the set parm value or down below when selecting the drop down value. So I can’t set it as Smart Bulb

I’d almost say either A) factory reset it or try the latest firmware. Dimmer = Index of /firmware

Yea I’d try the latest beta. I’m not a fan of the Hubitat updater and just used the Secondary Controller method.

Installed the new beta device firmware, set 52 to 2, pulled the air gap, and getting constant power to the dummy. But now, neither switch will turn off the lights. Do I need to adjust parameter 12 off the default?

But now, neither switch will turn off the lights.

Can you elaborate on what you are trying to accomplish? You set the dimmer to the smart bulb mode which is designed to provide constant power to the bulb(s). So in that mode, you will not be able to use the switch to physically cut the power to the wired load smart bulb(s), since the purpose of that setting is to keep smart bulbs constantly powered.

To turn your smart bulb(s) on and off, you should now be using scenes or Z-Wave association.