LZW30-SN turn off to turn on, turn on to turn off?

TL,DR; I have to turn my unpowered circuit off before I can turn it on.

I thought this was a problem with my wiring so I used a meter to test each wire end to end at every point. I know exactly which wires go without question now. I rewired it and have the same problem. Ok. I reset the switch. Issue persists. I program step 6. Issue persists. I’m getting frustrated here but I have one more switch in the 10-pack that I haven’t touched yet. I think, maybe the switch is bad and I pull the switch and put in a brand new LZW30-SN. Mother of pearl, the issue persists.

I figure, okay I’ve had enough for one day. I’ll post in the community on Monday. In the mean time, I’ll take this first switch and put it in a single pole circuit that I had intended for the last switch from the 10 pack. I tested my wires to make sure I had Line correct and installed it. Would you believe I have the exact same symptoms on a single pole?

So now, here I am. This has got to be a known issue, right? How can I have the same problem with two switches if it’s not.

Thanks in advance,
B

Would you believe I have the exact same symptoms on a single pole?

I was until you said that, lol.

All kidding aside, I lost you with the 2-way description. You said the symptoms were the same, but he problem with the 3-way related to the dumb switch, which there isn’t one with a 2-way.

Hi @bryan, could you provide a wiring diagram for the circuit, or pictures of both switches pulled out of the box? Let’s focus on the 3-Way issue first - maybe post the 2-Way issue in a separate question with pictures/wiring diagram.

Here’s the diagram I used

This is my dumb switch from multiple angles. 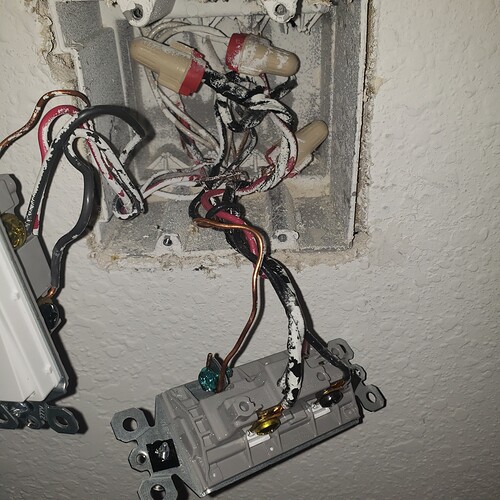 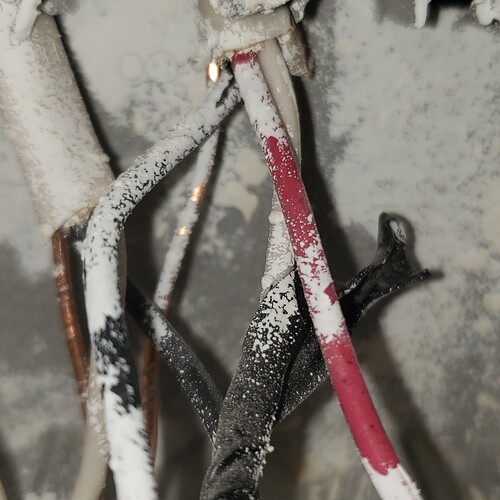 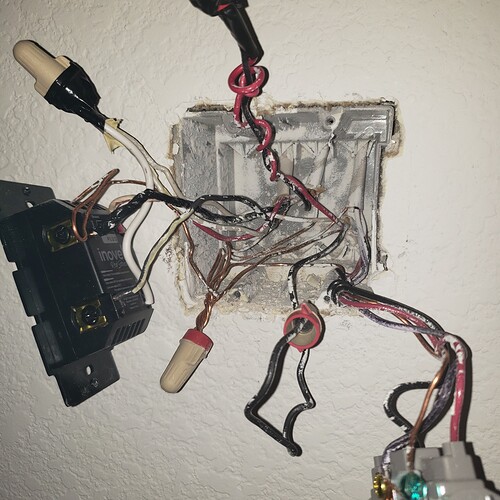 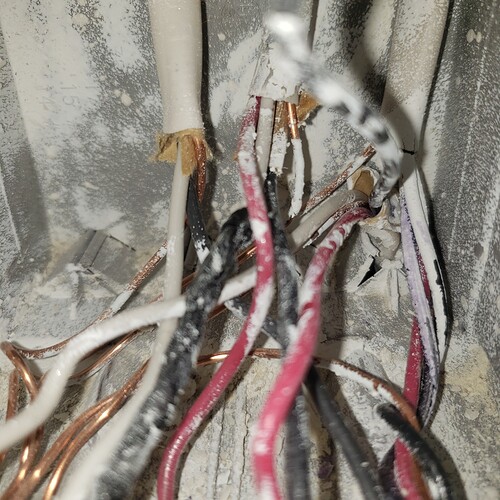 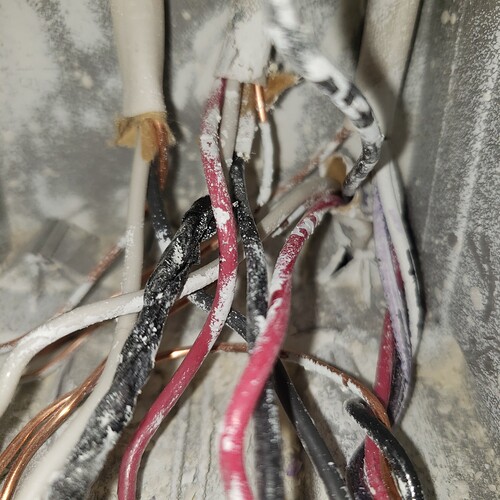 but I came across one that was Line/Load in Same Box (Neutral Wire Setup).

This is based on a quick look at your dumb switch only.

On you dumb switch I see 2 blacks and a red. I didn’t look at your Inovelli box pic, but looking at the dumb switch wiring, I see a black conductor wrapped around others. This can vary among electricians, but it’s commonly used to show the common, which in this case might be the Load. It’s a bit tough to see in the picture, but I think you’ll find that it’s connected to the black terminal on the switch.

Refer back to the last one I helped you with. Was that coiled black the Load? If it was, probably the same here.

In any event, as before find the 2-wire Romex in each box and test between the black and the white to find your line. The other 2-wire without voltage will be the Load.

Ok, so I looked at the Inovelli box. The resolution on your pics leaves something to be desired. When you take them, if you could do whatever you did the last time 2nd time around, those were much better.

Look a little more closely at the dumb switch (it’s why I included so many pictures). The Black, Red, and Wrapped wires are all coming in on the same Romex.

Neutral gang is connected to the Neutral on the switch

I know my Black on the power romex is hot in the smart box. I tested it with a meter. I tested every other wire in the circuit and there is no other hot. I also tested continuity on each wire individually to confirm both sides of each. The only thing I see in here that is different than the diagram is that for whatever reason the red wire to the fixture is used instead of the black, and the white wire to the dumb switch in the diagram is actually a black wire wrapped in tape at both ends.

I know my pictures are less than adequate. I took several and these are the best of the lot. I can try again if it will help, though.

I think you’re going to have to draw this out. From your description, you have a line and load in the Inovelli box. It sounds like from your last post that in addition to the 2-wire Line, you have two 3-wires involved.

If that is correct, which of the 3-wres as you described them (Traveler or Light) is going directly to the dumb switch. I thought that was what you called the Traveler Romex, but say that one conductor is going to the light?

If you can draw this out it will help make sense of what you have. 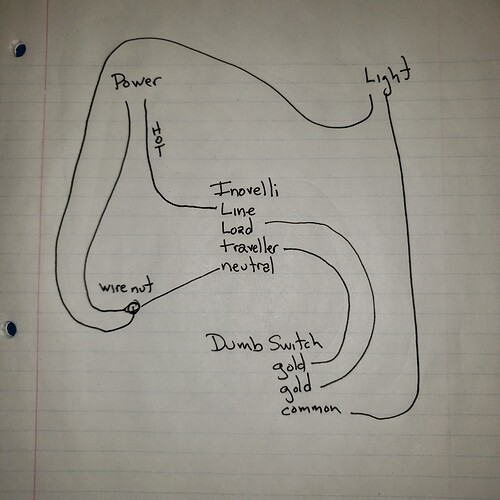 This diagram is clear, I hope.

the wire from common to light is connected via a wire nut in the box with the inovelli.

This diagram is clear, I hope.

I don’t think that diagram is going to be helpful, unfortunately. I don’t think it’s accurate. You have Romex, so all three conductors in the 3-wire at the dumb switch box have to go to the same place (the other switch box, right?). Yet in your drawing you have 2 conductors going to the switch box and one going to the light. That can’t happen with Romex. I see some other things, such as where the Load is connected to the Inovelli but no sense in discussing that further as I don’t really think your diagram matches your configuration.

At this point I don’t know what to suggest, as it’s tough to get detail from your pics.

I drew some direct lines that were intended to declutter the schematic. The wire from the dumb switch box that is drawn directly to the light is actually bridged in the other box with a wire nut.

This drawing illustrates that (as well as the couble terminated black wire in the romex to the light).

I double checked each of my connections just now. These are accurate. 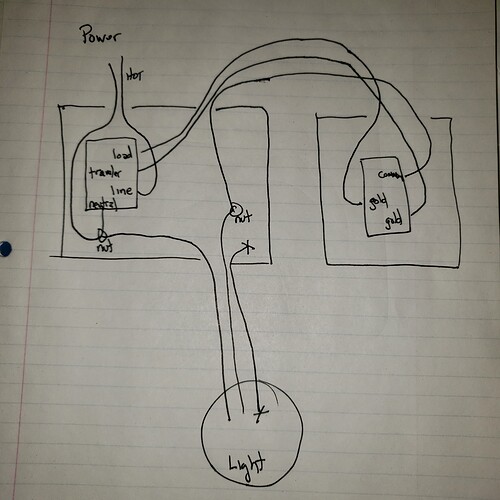 Is it possible that it is something other than the wiring?

Ok, way better on the 2nd drawing. The drawing matches the Inovelli and from what I can tell the connections to the switch are correct. I labeled the wire colors in your drawing and matched them up. 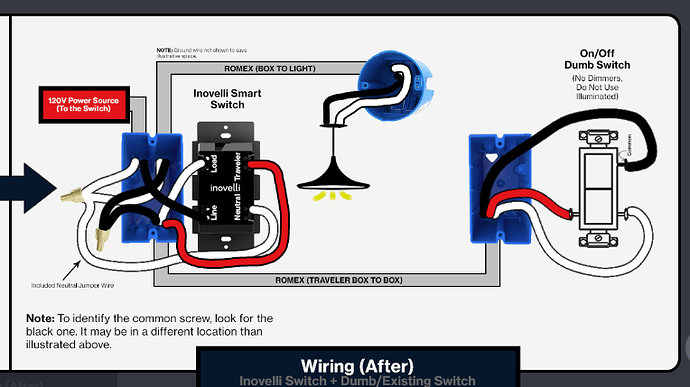 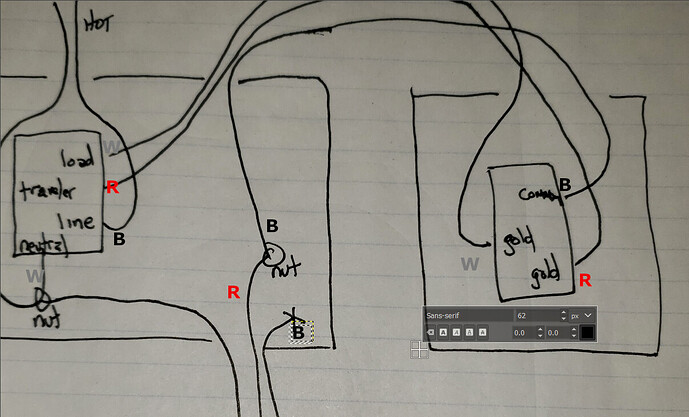 Yes, to answer your question, it can certainly be something else. I just like to insure the wiring is correct first.

One thing to try is to factory reset the switch and then re-add it.

Also, what bulb(s) is this connected to?

Also, what firmware is the Inovelli on?

Parameter 13 was added in firmware 1.17, and devices shipped in the past couple of months are shipping with 1.20. The default setting is to auto-detect, but let’s see what @bryan knows about his settings changes.

Parameter 13 was added in firmware 1.17, and devices shipped in the past couple of months are shipping with 1.20. The default setting is to auto-detect, but let’s see what @bryan knows about his settings changes.

That’s right, but you’re referring to the parameter for special load types like a T-8, which also might fix issue though. But I was referring to the dimmer’s parameter 21 where you specify the wiring type, i.e. 2-way, 3-way toggle, 3-way dumb switch. The switch autodetects that, supposedly, but that could also be the issue if the autodetection isn’t working properly.

I hadn’t added the switches to Home Assistant yet so I did all of them last night.

One thing to try is to factory reset the switch and then re-add it.
I have done that and now the behavior seems different. When the dumb switch is in the A position the Inovelli works as expected. When the dumb switch is in the B position, Pushing up on the paddle of the Inovelli does not change the lights at all. The blue light will blink once and I can hear the relay click once, but the lights don’t come on. Pushing down on the paddle does not produce any sounds or visual indicators.

Also, what bulb(s) is this connected to? It is a single fixture with 3 TCP 9w LED lamps.

up on the paddle of the Inovelli does not change the lights at all. Th

You can try flipping the bit on parameter 13 as @RyCam suggested. It’s not directly related to your load but it’s been known to resolve things.

Also, can you temporarily swap out the bulbs for incandescent?

Finding an incandescent will take a bit, but I know I have one around here that I use for other testing purposes.

Can you tell me what the process is to switch parameter 13? I can’t seem to find the instruction.

Can you tell me what the process is to switch parameter 13? I can’t seem to find the instruction.

Sorry, but I’m not a HA guy, but there are a number here. Someone should weigh in with parameters.